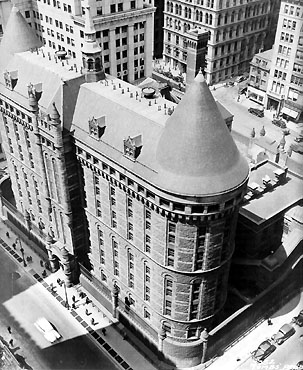 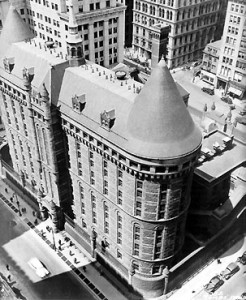 In our last podcast, we referred to the New York city prison not-so-affectionately nicknamed ‘the Tombs’ as being ‘beneath City Hall’. In fact its a couple blocks away from current City Hall.

Today its officially called Manhattan House of Detention. It was monickered the The Bernard B. Kerik Complex before being stripped of that name in 2006 due to Kerik’s unfortunate ethic charges.

But its always popularly been referred to as the Tombs since its construction in 1839, built in the former location of Collect Pond and smack near the heart of the overcrowded Five Points slum. Perhaps ominously, the original, rather ornate structure was designed after an ancient Egyption mausoleum. Its reputation as a vile, sweltering house of horror, however, was cemented by Herman Melville in his classic Bartleby the Scrivener.

Or as described by writer James Baldwin : “Massive, gloomy, and strong, it is a place of sorrow and tears and dread forebodings.”

Part of its notorious reputation was actually based on its location. Collect Pond was drained during the first part of the 18th century (by canals which then became Canal Street), and buildings, including the Tombs, were built on the newly revealed land. However almost as quickly as it was built, the building began to slowly sink. Yet the structure stayed mostly intact, creating damp and loathesome conditions for those imprisoned in its lower levels.

Its notoriety fascinated the public as much as it terrorized the criminal element. PT Barnum bribed prison workers to acquire possessions from famous criminals who were housed and (later) executed there, in the courtyard gallows.

This building with the Egyptian facade was eventually replaced by a more castle like sort in 1903 (see picture above), but that too was condemned in the 1970s. As we mentioned in our podcast, the building was briefly reopened to contain the hundreds of people arrested during the 1977 blackout. A massive remodeling finally happened in 1983 to give us the distinctly uncharming downtown structure we have today.

A lot more on the building’s fascinating history can be found here. I admit, its a lot more difficult to creep past this place knowing its rather lascivious history…. 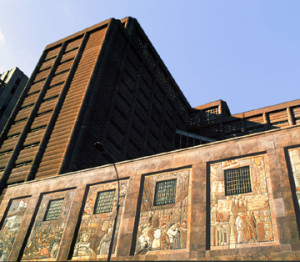