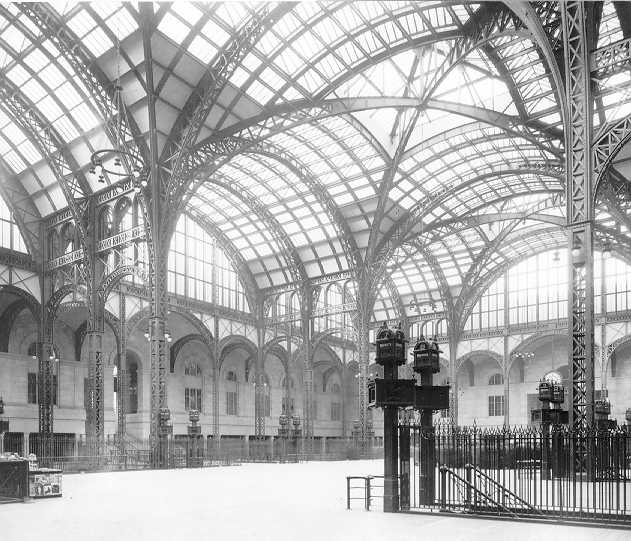 PODCAST: The story of Penn Station involves more than just nostalgia for the long-gone temple of transportation as designed by the great McKim, Mead and White. It’s a tale of incredible tunnels, political haggling and big visions. Find out why the original Penn Station was built to look so classical, why it was then torn down, and what strange behaviors the tunnels that connect it to New Jersey exhibit every night.

The grandeur and size of Penn Station shocked New Yorkers as it rose from the massive pit excavated by workmen employed by Penn Railroad. McKim, Mead and White’s Roman homage expressed the scope of their client’s ambitions; even more impressive than the station were the miles of tunnels under Manhattan. The image below was taken from Gimbels department store

(Click the picture below for greater detail. Pic courtesy Shorpy)

The empire of the Pennsylvania Railroad, extending through most of the northeast, but unable to reach Manhattan until 1910. (Map courtesy American Rails.)

Mary Cassatt’s acclaimed painting of her brother Alexander, the president of Penn Railroad from 1899 to his death in 1906, seated here with his young son Robert

The breathtaking waiting room, with a ceiling that rivaled the greatest buildings of ancient Rome. Even if you were late for your train, how could you not stop for a second to marvel at it?

A crush of people along the concourse in 1917. They’re actually not commuters though; they’re fans of appropriately named evangelist Billy Sunday, waiting for his train to arrive.


This postcard illustrates how especially sunken the tracks were, coming from deep tunnels from both the west and east sides. The building itself seems ethereal by comparison.

Across the street from Penn was this swanky Greyhound Bus Terminal, which opened in 1935 (Photographed by Berenice Abbott)

From this view, you get a sense of its massive size and effect on the neighborhood….

While, from street view, the building seemed to continue well into the horizon.

The Hudson River tunnels, a stunning engineering feat that required some truly exact measurements; digging started from both sides of the Hudson River and met in the middle.

The ambiance inside a tunnel compressed-air chamber. ‘Sandhogs’ spent months boring under the Hudson and East rivers, with the constant fear of flooding, cave-ins and ‘the bends’.

An ad for the World’s Fair of 1939-40 in Flushing Meadows, Queens — a short distance from Penn’s train yards.

The scene of more than a few emotional departures and arrivals during World War II.

Penn is ungraciously torn down starting in October 1963. The sight stunned New Yorkers, many who thought nobody would ever go through with wrecking the monument. Its demise galvanized architects and preservationists; the sacrifice of Penn most likely helped save dozens of other buildings from a similar fate.

Nearby also stands a statue of Samuel Rea, president of Penn Railroad from 1913-1925