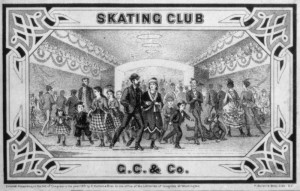 People were just wild about skating in the 1880s.

People were a touch insane in the 1880s and 90s. One of the most popular sports was the six-day bicycle race, a sport so popular, particularly in Madison Square Garden II (debuting there in 1891), that they were referred to as ‘madison events’ in international circles.

But they were preceded by six-day rollerskating marathons, the first one in New York on March 1885, in the original Madison Square Garden — an event so strenuous it actually killed the young 19-year-old winner, William Donovan.

Donovan was a newsie from Elmira, NY, who trained for the event with a man who went by the name ‘Happy Jack Smith.’ The event, a ‘go as you please’ event involving a velodrome built within the garden, attracted 36 skaters aiming for a $500 prize.

The dangers of this event were apparently well elaborated. ” ‘It’s the first test of endurance that has ever been made on roller skates,’ said a sporting man, ‘and I believe that over half the men entered will cripple themselves for life.’ “ [source] Great, where do I sign up?!

I can’t help but think this sort of event would attract a certain sort of young, brash derring-do, possibly with lots of time on his hands. From the same article, two spectators were quoted describing a participant:

” ‘I shouldn’t think his mother would let him come out of the house looking that way,’ said a pretty little miss.

Contestants would frequently collapse in a faint, be taken off the track, revived, then taken back to the course. Spectators actually sat in the arena for the entire six days, in apparently some kind of come-and-go ticket arrangement. There was an ongoing carnival and bicycle demonstrations to keep ticket holders busy when the skating got boring.

It appears athletes were allowed to rest off-track, but obviously the time spent sleeping was taken off their total. Many of the most popular skaters were given nicknames; redheaded Donovan, for instance, was ‘Sorrel-top’, I assume for the color of red sorrel, not green. The total length of the track multiplied by the 144 hours of non-stop riding meant that young Donovan had ridden 1,092 miles, awarding him the prize money and a fine diamond belt.

A few days later, while staying nearby at the trendy Putnam House, the victor Donovan caught pneumonia. While looking out his window at people streaming to P. T. Barnum’s Greatest Show on Earth (holding court at, yes, Madison Square Garden), Donovan collapsed and died within 36 hours — of acute pericarditis (heart inflammation).

Newspaper investigation of his death reveals that the boy had skated the course with a ‘dead bone’ (necrosis) on his right leg.

Within days it was revealed that a second skater who participated in the event, Joseph Cohen, had also died afterwards.

Now, why the heck would anybody be interested in roller-skating for six straight days?

Rollerskating was a popular craze in the 1880s, with mass production and sale beginning then, so a six-day roller-skating fest would have been the 1885 equivalent of x-treme sports.

Evaluating the safety of the event was indeed in its infancy, as this excerpt from a medical journal in 1885 illustrates:

“The mind acts “exoneurally,” we are told, and the vibrating brain-cells of the enthusiastic roller-skater communicate their rhythmical pulsations to the previously insensitive spectator. Whatever the mechanism, there is certainly at present a morbidly exaggerated passion for, and indulgence in, roller-skating. And the question comes home to the physician, whether it is doing any physical or mental harm.”

Too much skating, as Donovan proved, was dangerous. Organizers of the skating marathon booked the Garden for a second event in May 1885, but participants were handpicked only the most experienced and healthy, including a few surviving the last go-round. Shortly afterwards, official skating events were prohibited from being longer than four hours in length.

1 reply on “Stars of MSG: The deadliest roller skating event ever”

Roller-skating is truly indulging. Before I read this article, I was actually asking myself if it’s possible that anyone has ever tried to skate for three straight days. It seems that they’ve done more than three days – but resulted to death of some skaters.
Well, it was 1880’s, a time when only a few people cared about physical and mental health. They must’ve missed the part where people need rest & sleep.
If this can possibly happen again, of course with more safety precautions, I wish majority of the population would participate. It’s not that hard to buy roller skates anymore; just go online or to the nearest skate shops — take some days to learn, and there, go skating! I would gladly promote this sport, specially to the youth.