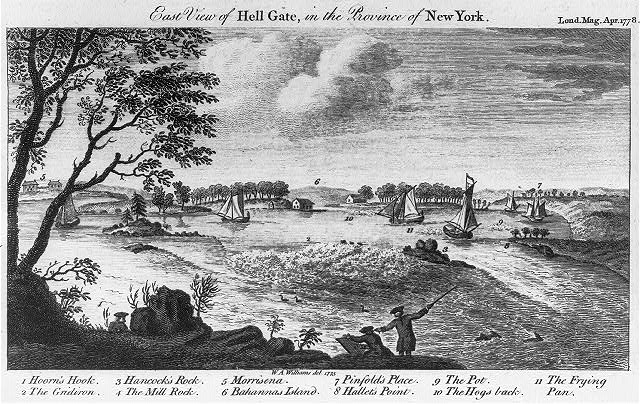 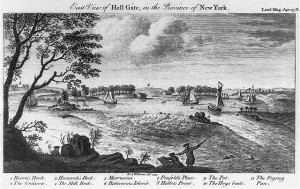 In digging around a little further for information on Hoorn’s Hook and Hell’s Gate — two East River spots mentioned in the Gracie Mansion podcast — I came across the incredible illustration among the Library of Congress’s digital images page.

Labeled the ‘East View of Hell’s Gate, in the Province of New York’, the piece ran in The London Magazine in April 1778. The London was a anti-Tory publication that naturally took great interest in the war across the pond.

That April, the magazine ran a ‘Description of New York Island’ paying special attention to places of ‘dangerous passage’, including, naturally, the East River’s most treacherous pass, ‘that remarkable spot, called Hell’s Gate’.

(By the way, you can read the whole issue here, thanks to the Hathi Trust. The magazine features such articles as ‘The Hypochondriack’, ‘The False Prude’ and ‘A Turkish Sentimental Tale’ and columns on poetry and mathematics. But the article on New York is not, curiously, available to read.)

Alongside this article ran the plate above; however, time and distorted perspective have almost entirely obscured the precise location where the picture was etched. Our only clues are a set of numbered details, most of them old place names that have faded into obscurity.

1 Hoorn’s Hook (mentioned in the podcast)
2 The Gridiron
3 Hancock’s Rock
4 The Mill Rock (Clue: This is still around.)
5 Morrisana (Probably not the closely named neighborhood but the home of this person.)
6 Bahannas Island
7 Pinfold’s Place
8 Hallet’s Point (Clue: Part of this today.)
9 The Pot
10 The Hog’s Back
11 The Frying Pan

How many of them could you place approximately on a current map today? (Click on the illustration for a bigger view) I admit, many of them have me stumped. Take a guess, then look at a Google Map overhead look of the area for comparison. This article reveals the identity of a few of these.