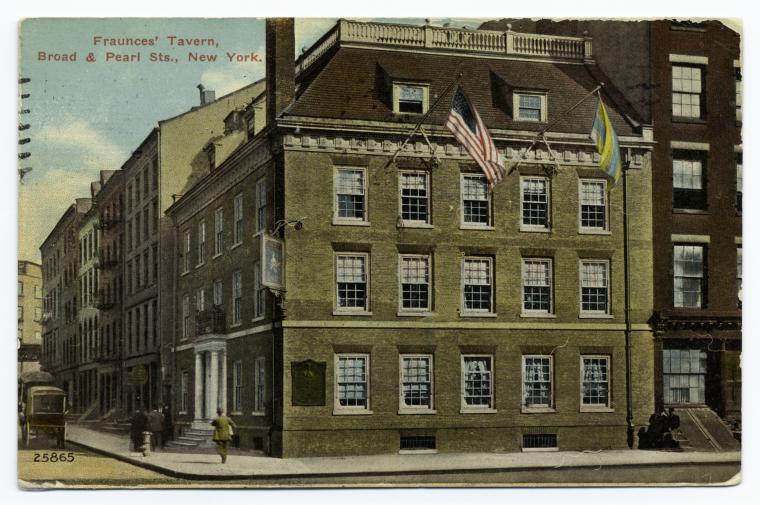 PODCAST Fraunces Tavern is one of America’s most important historical sites of the Revolutionary War and a reminder of the great importance of taverns on the New York way of life during the Colonial era. This revered building at the corner of Pearl and Broad street was the location of George Washington‘s farewell address to his Continental Army officers and one of the first government buildings of the young United States of America. John Jay and Alexander Hamilton both used Fraunces as an office.

As with many places connected to the country’s birth — where fact and legend intermingle — many mysteries still remain. Was the tavern owner Samuel Fraunces one of America’s first great black patriots? Did Samuel use his position here to spy upon the British during the years of occupation between 1776 and 1783? Was his daughter on hand to prevent an assassination attempt on the life of George Washington? And is it possible that the basement of Fraunces Tavern could have once housed a dungeon?

ALSO: Learn about the two deadly attacks on Fraunces Tavern — one by a British war vessel in the 1770s, and another, more violent act of terror that occurred in its doorway 200 years later!

One of the oldest, diverse and historic rooms in New York City, the Long Room played host to Colonial Era dance classes, George Washington’s farewell speech (pictured below), decades of guests as a boardinghouse, and now a replica of tavern life in early America. [Columbia U]

How the interior may have looked in the 19th century, as Fraunces became more a lodging house frequented by longshoremen, sailors and dock workers. [NYPL]

The changing facades of Fraunces: this sketch is from some point in the 19th century, when additional floors were added to the original structure. You can see the difficulty architect William Merserau might have faced in the 1900s when trying to reconstruct the building to reflect its original condition.

This doesn’t seem like it could even be the same building, and yet, there’s the sign for the tavern hanging over the second floor and a street sign for Broad Street to the left. This picture is between 1890 and 1904, before the structural changes. [LOC]

After reconstruction, somewhere between 1910-1920, looking almost as it does today. In the distance to the right you’ll see a bit of the elevated train line. [LOC]

By the 1970s, modern skyscrapers permanently change the feel of the Financial District, but Fraunces holds firm.

The parking lot across the street would soon be replaced by the towering Goldman Sachs building. Interestingly, underneath these cars lies the remnants of Dutch New Amsterdam, including the earlier Lovelace’s Tavern. [LOC]

Samuel Fraunces, in a portrait of the tavern owner painted between 1770-1785, giving little clue to what many consider to be his real racial identity. The lineage of the man nicknamed ‘Black Sam’ continues to be debated to this day.

Fraunces was the scene of a relatively recent attack in 1975 when members of the Puerto Rican nationalist group Fuerzas Armadas de Liberación Nacional Puertorriqueña (FALN) placed a bomb in one of the tavern’s doorways, killing 4 people and seriously injuring many others. (You can find the picture below and many others — including the note left at the scene taking responsibility for the attack — at this Latin American studies website.)

Fraunces Tavern makes an wildly inaccurate appearance in a 1992 animated film, loosely based on the life of Washington.