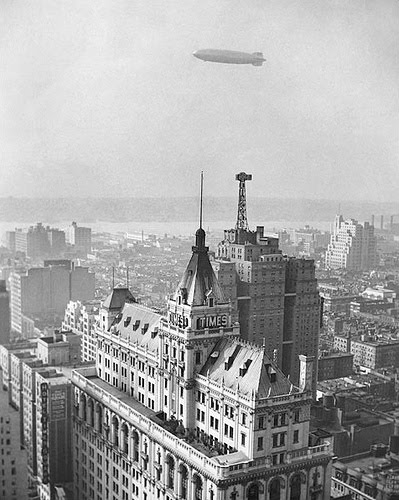 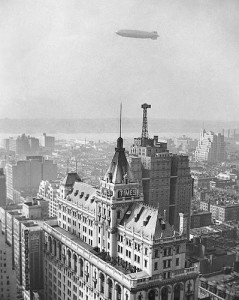 Taken during one of its 1936 voyages, with the New York Times building in the foreground. (source: straatis/Flickr)

The anniversary of the 1937 explosion of the German passenger airship Hindenburg over Lakehurst, NJ, was last Friday, May 6, and I spent some time this weekend looking up old videos of the famous Zeppelin floating over Manhattan. Sure, we occasionally get blimps over the city; who can forget the Conan O’Brien-themed airship last year? But the German-built Hindenburg was the largest and most luxurious air conveyance of its day.

And fated for a short life. Its first appearance over New York was on May 9, 1936. Less than a year later, it would explode over the New Jersey air station runway, killing 36 people, a disaster accompanied by the world’s most famous freak-out by radio announcer Herbert Morrison.

The Hindenburg came to America a handful of times in 1936, including two complete roundtrip flights between Frankfurt, Germany, and Lakehurst in the month of May that year. [source]

This video shows a lot of mid-1930s New York. The Hindenburg makes an appearance at the 1:30 mark:

Yes, in case you were wondering, that is a set of swastikas on its vertical fins. Nazi insignia flying over New York during the 1930s!

Here’s an entire list of flights the German airship took during its short existence.  And here’s a link to an older Bowery Boys article on a New York history of blimps and zeppelins.