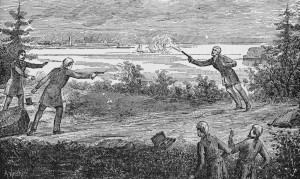 Alexander Hamilton was shot by Aaron Burr 207 years ago today in their infamous morning duel in Weehawken, New Jersey. Hamilton would die of his injuries the next afternoon, July 12, 1804.

Just imagine Joe Biden and Timothy Geithner rowing to New Jersey and shooting at each other*!

This bluff overlooking the Hudson River was the bloodsoaked de facto destination for gentlemanly dueling. Early New Yorkers chose to duel there over the streets of the city, most likely to prevent the possibilities of harm to bystanders. But a secluded ‘rural orchard’ between Duane and Worth streets, west of Broadway, was the scene of an 1786 duel ending in the death of one of the participants.

Of course, shootouts where frequently occur during the 19th century that might have had a pretensions of a duel, but rarely followed the ‘rules’ of dueling, called the code duello.

By the way, anybody looking to make an Alexander Hamilton-themed pilgramage is in luck. His home, the Hamilton Grange, will be re-opened to the public later this summer. The structure was famously uprooted and moved back in 2008 to St. Nicholas Park.

(*Hamilton was the head of the U.S. Treasury two administrations before Burr became Vice President. So perhaps the proper absurd analogy is Joe Biden vs. Larry Summers?)