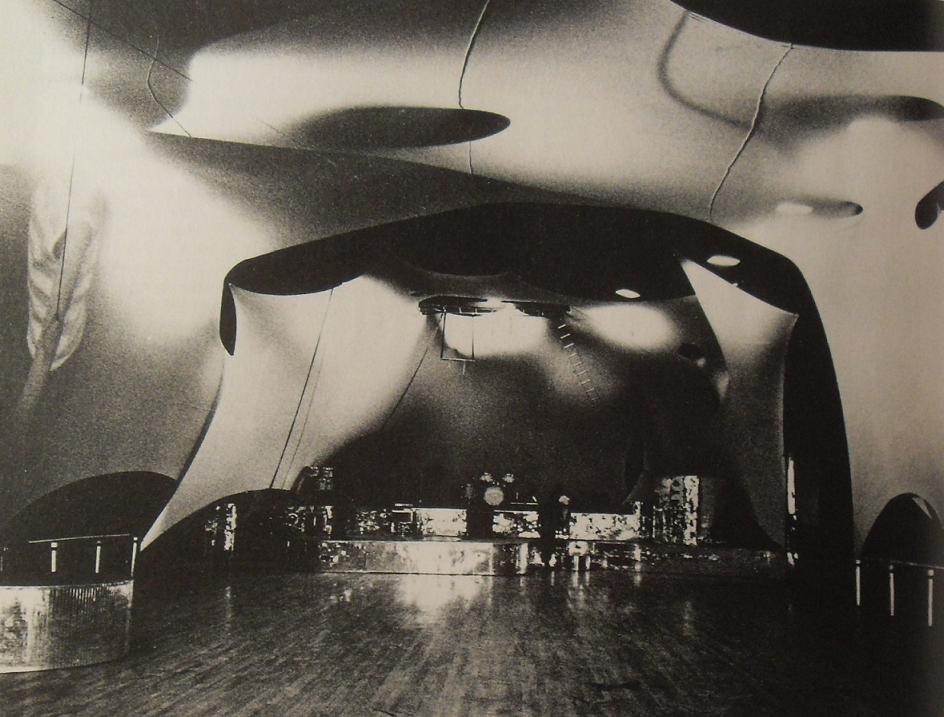 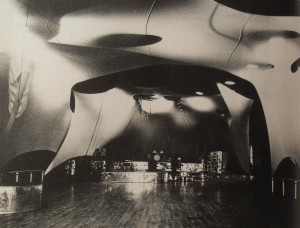 Almost predictably, a couple characters from ‘Mad Men‘ finally interact with a psychedelic temple of Andy Warhol, in this case the nightclub Electric Circus at 19-25 St. Mark’s Place, today the site of a Chipotle and a Supercuts.

As I wrote back in an article from 2007: “It became the East Village fuse box for Warhol’s talents and those of his entourage, in particular the Velvet Underground and Nico.  The dazzling synthesis of psychedelica and glamour, of the Velvet’s strange atmospheric music and Warhol’s performance displays of lights and costumes immediately attracted the scenesters to this odd little street — according to the New York Times, “everyone from hippies to Tom Wolfe and George Plimpton” — way before St. Marks would make its reputation in the 1970s with the punk scene.”

An original ad from the Electic Circus, summer of 1967 (courtesy butdoesitfloat) 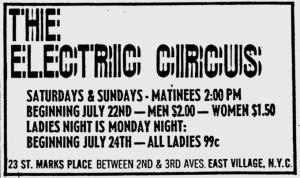 Since I wrote that article, many people have chimed in within the comments section to relive their memories of Electric Circus.  Here are a few of my favorite comments from those who were actually there:

“What memories.  I started working at the E.C. as a ticket taker.  I say working, but in reality, we didn’t get paid, we got let in for our work.  Like Woodstock, if you remembered much of what happened at the E.C. you weren’t really there.” – Being the Best

“I worked at the Electric Circus, 67-68-ish.  I was the fire-eater, and mime/clown, working with another mime named Michael Grando.  Larry Pizoni was the director of the circus show.  We had a trapeze artist named Sandy [Alexander], and security was a biker club called the Aliens (which worked, unlike Altamont).

Every time I’m in New York and in the East Village, I stop on St. Mark’s and bow my head.  I wanted to have someone put up a plaque, but nobody in the stores knew who to call.” – Richard Bluejay

“I was one of 5 or 6 people who worked at Limbo* for a number of years across from the Electric Circus.  I was there at the opening night, and then on for a long time, I remember we use to give discounts to the Circus employees so we get in free. Can not tell you how many times I was in there but it was a lot!!!!  It was a great time back then.  Fillmore East was around the corner and Max’s Kansas City was not far away.  East Village was where it was at back then ” – Anonymous

A freakout-inducing video from Electric Circus scored to the music of Frank Zappa:

“I remember two things about the electric circus from my one visit in 1969. One was the fact that the walls were not at a right angle to the floor, which combined with the strobe lights and swirling crowd, made for a delightfully disorienting experience. The other was a dark room off to the side where couples — or even strangers I suppose — could sit and smooch. In addition to all kinds of nooks and crannies for this purpose, there was a rotating upholstered carousel in the middle of the room, divided into sections, one per couple.” — Anonymous

Below: A typical crowd on the stairs outside the Electric Circus (pic courtesy Old New York) 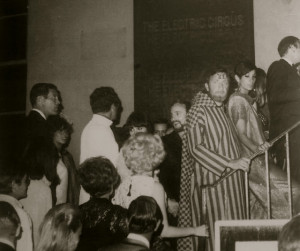 “I’m so excited, after all these decades to hear from people who got to experience the most amazing Electric Circus, as I did.  By far dancing myself into a dazed, psychedelic trance, while absorbing the magical energy of the Chambers Brothers sing ‘Time’, was right up there in my top ten of life-altering experiences.  I was a runaway, living with new friends in the Village.

I used to panhandle on St. Marks Place and spend all my money on clothes at the Limbo, pizza, and tickets to hear my fav bands, except for the times I used to get in for free.” — Sonny

Below: Sonny’s jam from the floor of the Electric Circus:

“I can’t remember exactly how I arrived at St. Marks Place that first night.  I had never been to St Marks Place and I certainly didn’t know about Electic Circus.  I was just following a friend of mine who was interested enough in the new culture to find out where to go and what to do.

There must have been some kind of happening that night because the streets were full of people.  People were hanging all over the stairs leading up to the Circus.  And, you didn’t have to pay.  We just walked in. I still remember it emotionally.

The big room was completely decorated with fabric amorphously draped on walls and spanning corners and cornices.  Projectors behind the fabric ran continuous short loops of films. Of course, it was dimly lit so as not to wash out the films.  People were everywhere and moved mysteriously in the smoky dim light.  I was born in Brooklyn and had already lived a few years in Manhattan, but I never saw anything like this before.  The next time I saw EC the decor had changed. I never paid to get in because I was a member of the PABLO Light** show.” — Anonymous

** That would be Lights By Pablo, a leading ‘liquid light show’ exhibitor of the late 1960s, frequently here and at Fillmore East.