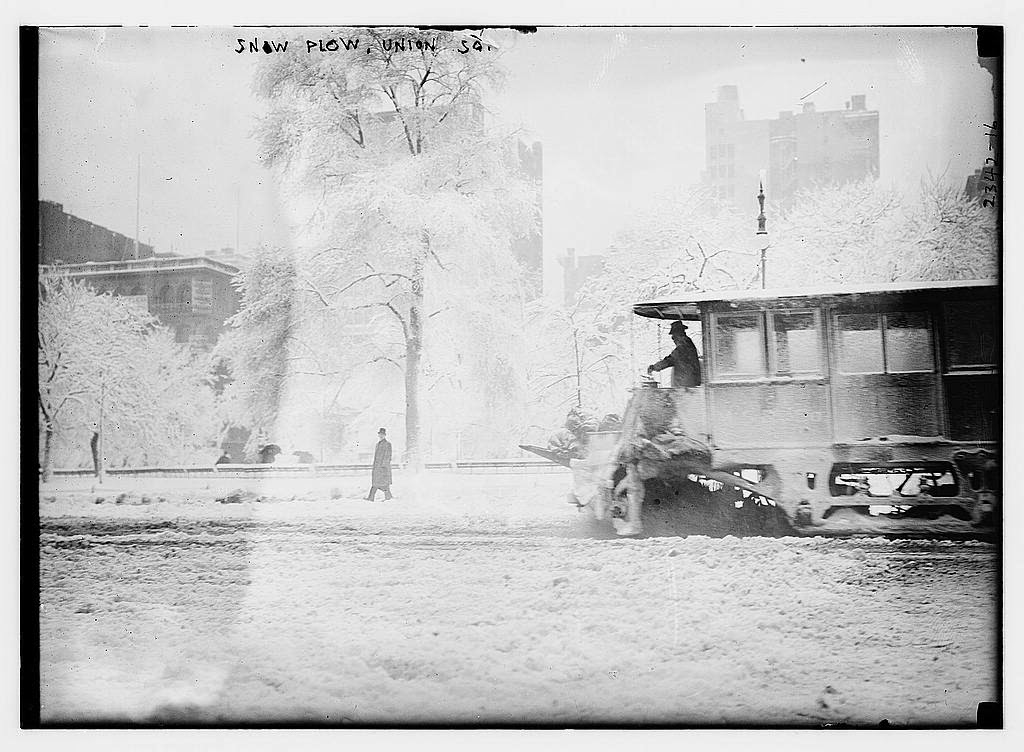 For some of New York City’s history, snowstorms have been completely paralyzing, and most residents had to clear their own streets, an impossibility in areas of a more rural character.  The notion that it was actually the city’s responsibility to remove snow is a product of the early-to-mid 19th century.  The notion that all residents — not just the wealthiest — should benefit from this difficult civic task is newer still.

There was no simple method for clearing thoroughfares.  The task was heavily labor intensive, with dozens of men shoveling down roads obscured with newly fallen snow.  As a result, only the most important streets were cleared — mostly around City Hall, Wall Street and Fifth Avenue — leaving the rest of the city to fend for itself.  Later on, snow plows were attached to horses, piercing through the snow-covered streets, while wagons would follow along to collect the snow.

The arduous task of clearing the streets with only horses, shovels and carts, 1867 (NYPL) 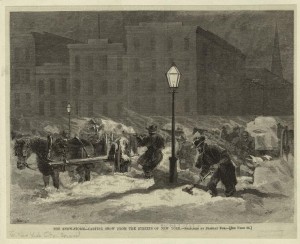 Civic snow removal was initially a responsibility of the police department up until 1881, when the Department of Street Cleaning became its own separate entity.  New York street-cleaners manned a broom during the spring and a shovel in the winter, working with horse-drawn carts in “piling and loading gangs” to clear gutters and intersections.  Most of the time, snow clearing was not even begun until it was believed the snowstorm was over.  As a result, mountainous piles were even more difficult to tackle.

Obviously, this was slow going and highly prone to the corruption of the era. (Need snow removed from your street, business owner? )  And due to the erratic nature of snowfall, there were hardly enough men on hand at any given moment.

A grim discovery in the snow during the Blizzard of 1888: 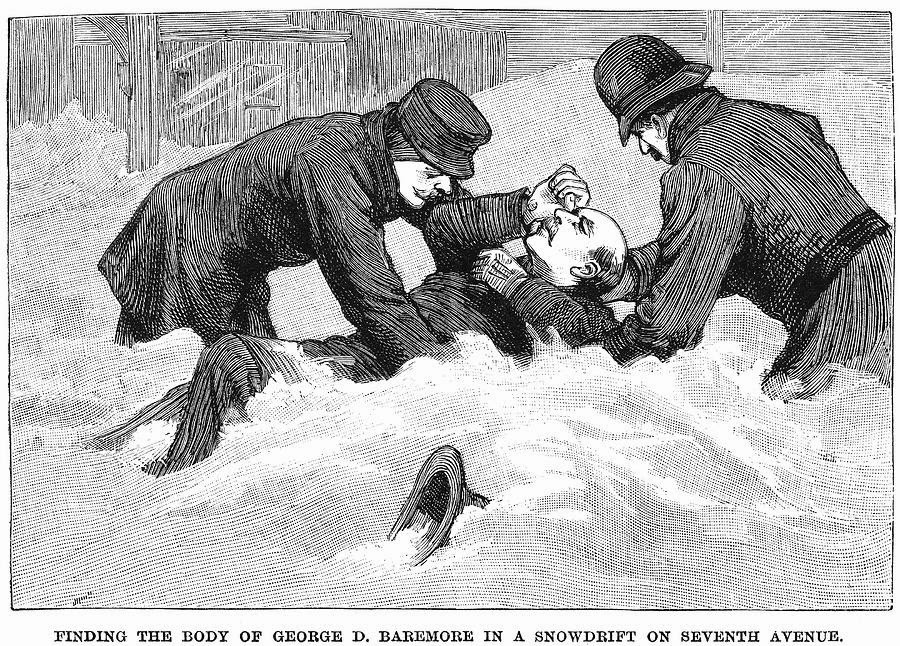 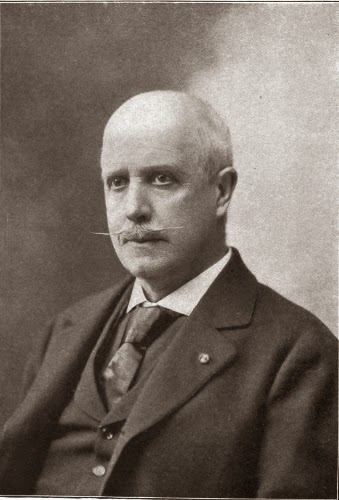 The Blizzard of 1888 changed everything in New York City.  The storm was so devastating that certain streets were blocked for days.  More horrifying still, due to the hurricane-force winds, many people had been knocked unconscious and were subsequently buried in the snow.  Not to mention the hundreds of dead animals also found underneath the massive snow drifts.

New York’s entire system of street cleaning — in sun or snow — radically changed when the Civil War veteran George E. Waring Jr. (pictured at right) became commissioner of the Department of Street Cleaning in 1894.  The brilliant and reform-minded engineer had guided healthy sewage and draining maintenance throughout the country, from the design of Central Park to the streets of Memphis, Tennessee.

Waring transformed his men into a small military unit, garbed in all-white uniforms who occasionally marched in parades with Commissioner Waring out front, on horseback.  This military mindset was a boon for New York; Waring referred to his employees as “soldiers of the public.”  Street cleaning was no longer a luxury, but a necessity.

Clearing snow in the Waring era, 1896, photos by Alice Austen (she was riding around in her bike in this weather?) Courtesy NYPL 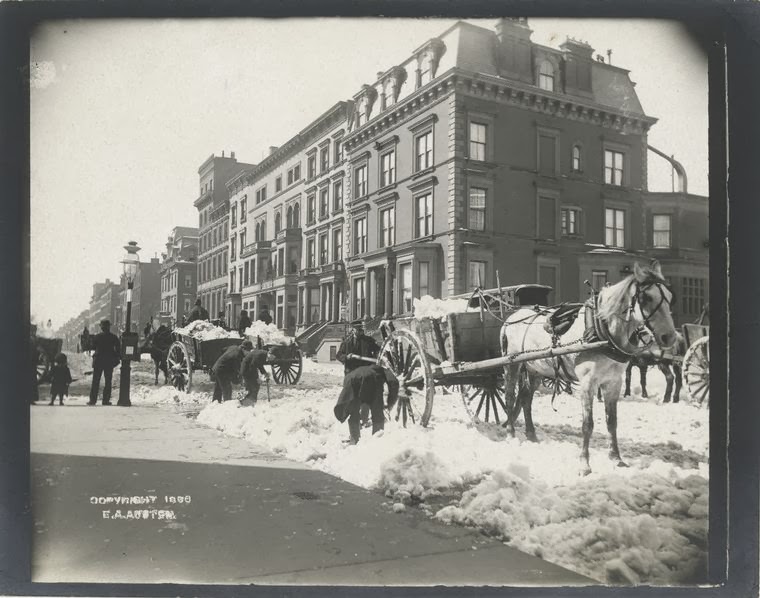 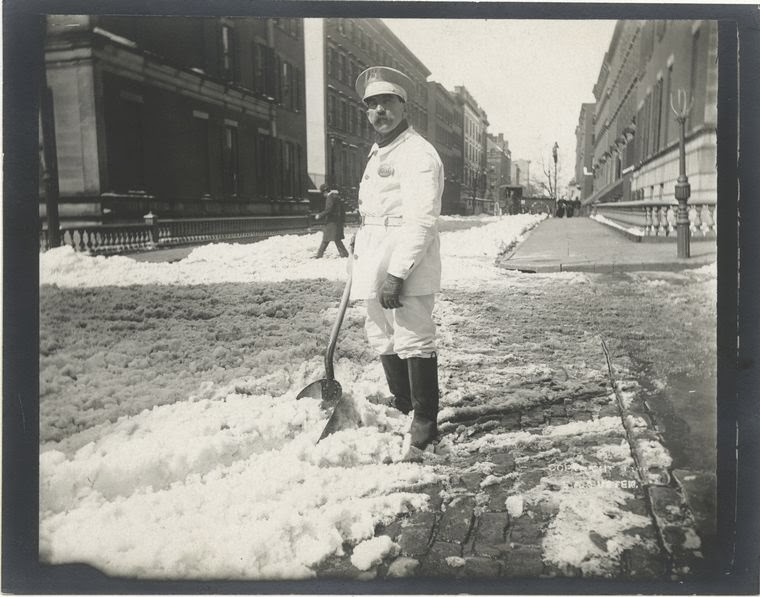 Waring was part of a large progressive movement in the 1890s, one that would finally, with zeal, tackle the numerous health and livelihood issues associated with the city’s overcrowded tenement districts.

In the spring of 1897, the commissioner produced a lengthy treatise for Mayor William Strong on the thorny subject of clearing snow.  Its opening paragraph lays out the scope of Waring’s staunch, progressive vision:

“The question of snow removal has always been one of the most vexatious problems confronting the various administrations.  The removal of ‘new fallen snow from leading thoroughfares and such other streets and avenues as may be found practicable’ is a duty made obligatory upon the Commissioner by law, and with each year, the moral obligation to the vast traffic interests of congested Manhattan Island becomes more insistent.” [source]

Before Waring, never was it considered necessary to remove snow from the entire city, but only from “leading thoroughfares”.  However, thanks to the rise of sophisticated urban planning and progressive socialism, it soon became a “moral” responsibility on behalf of the health of the city and its citizens.

From the report:  “[A] delay in the removal of the almost knee deep snow and befouled slush is at the cost of much sickness and, probably, lives each winter.”

By the late 1890s, Waring hired private contractors specifically for snow clearance, leaving his regular crew of street cleaners to focus on their regular responsibilities.  With the 20th century came motorized plows and more sophisticated street-cleaning rules to better facilitate the headache of a bad winter.

But after Waring, it would no longer be acceptable in the public’s eye to pick and choose which neighborhoods receive the city’s attention. (Both our former and current mayors have certainly learned this lesson!)

Here are some pictures of the Valentine’s Day Blizzard of 1914, one hundred years ago!  The bottom picture is of Union Square, with snow covering the construction site of the new subway station. (per comment at the Library of Congress, who also supplies these images) 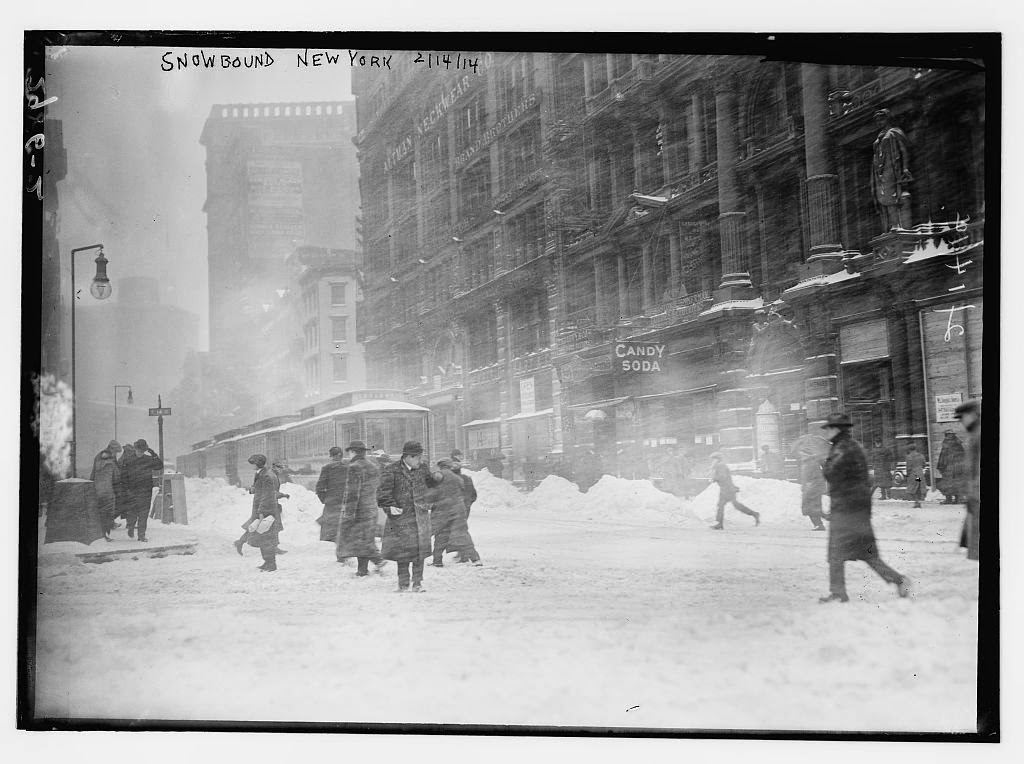 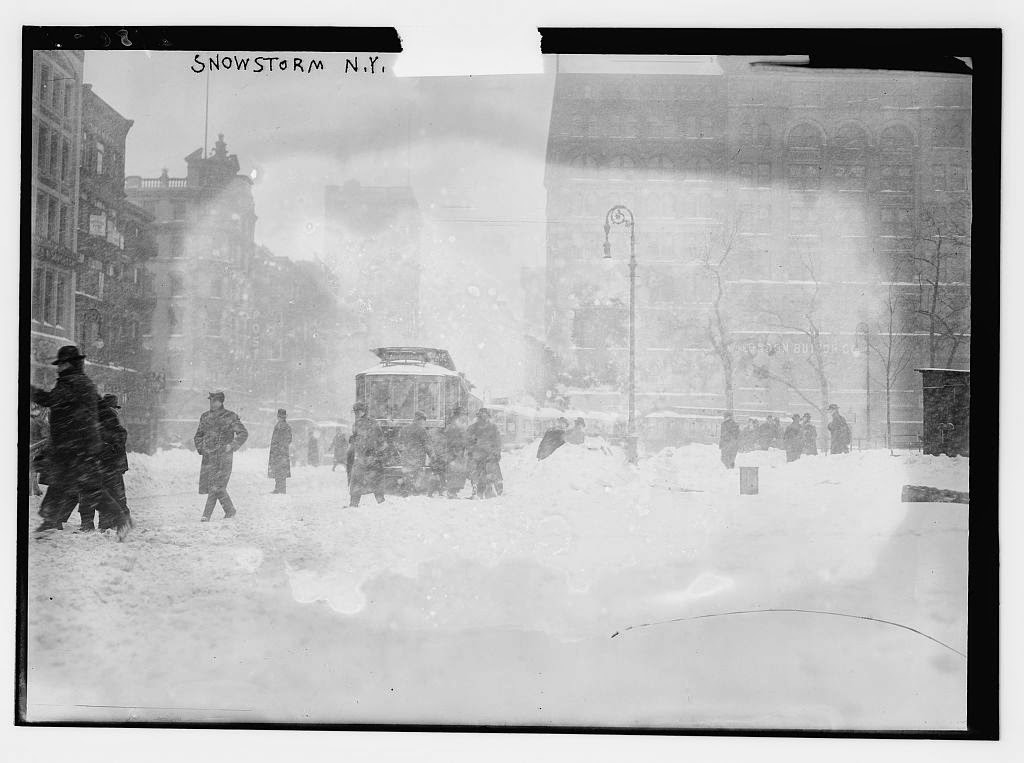 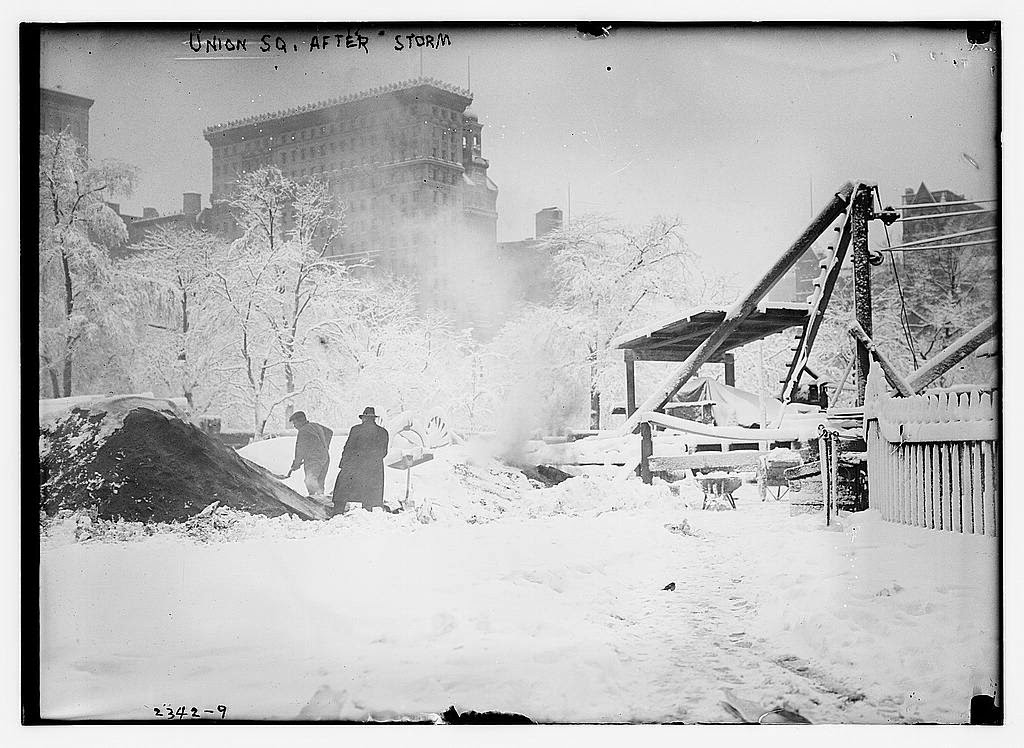 I promise, this is my last snow-related post for at least nine months!