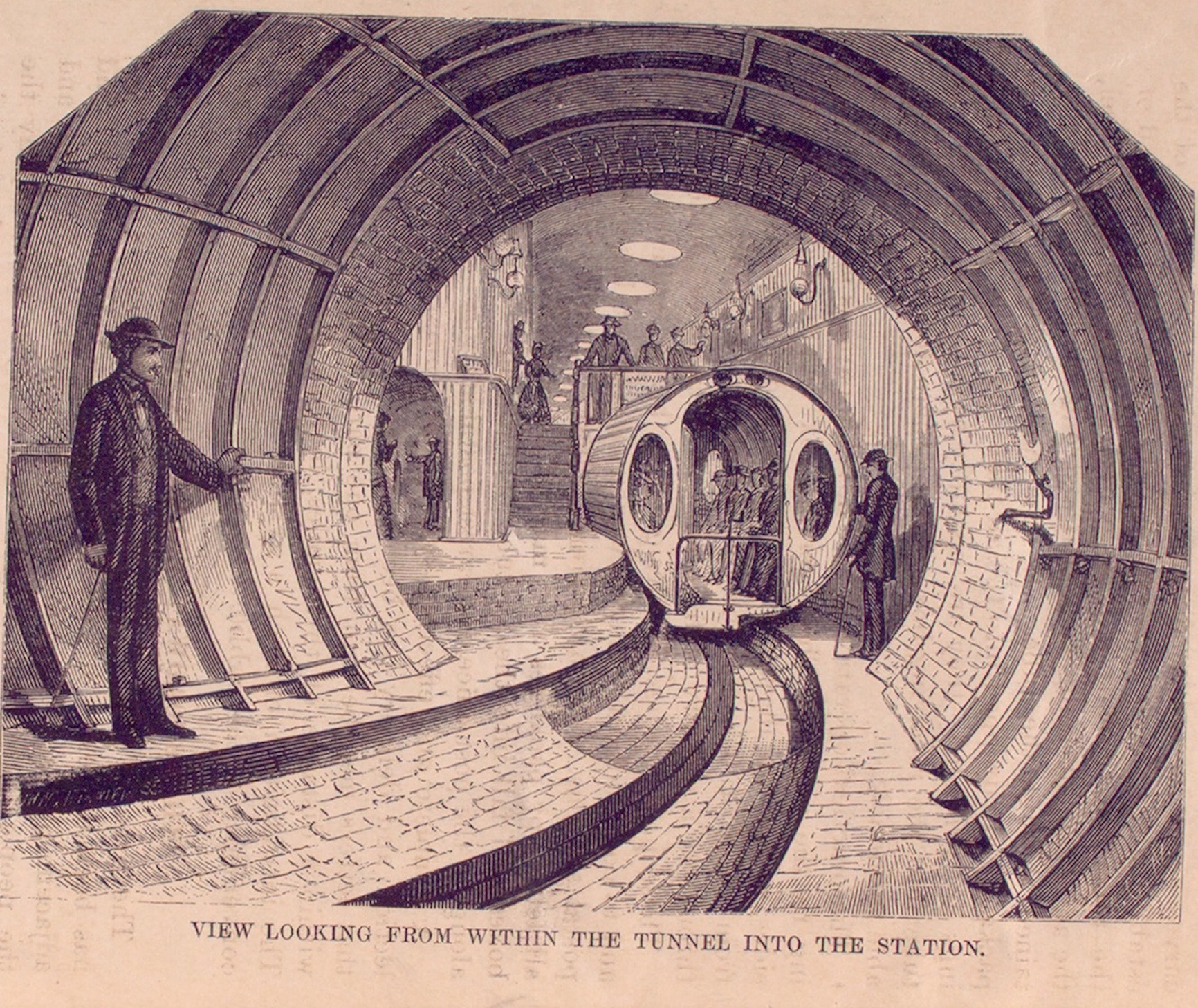 The first subway in New York — the first in the United States! – traveled only a single block and failed to influence the future of transportation. And yet Alfred Ely Beach’s marvelous pneumatic transit system provides us today with one of the most enchanting stories of New York during the Gilded Age.

Inventor Beach, the publisher of the magazine Scientific American, believed he had the answer, using pneumatic power — i.e. the power of pressurized air! But the state charter only gave him permission to build a pneumatic tube to deliver mail, not people.

That didn’t stop Beach, who began construction of his extraordinary device literally within sight of City Hall.  How did Beach build such an ambitious project under secretive circumstances? What was it like to ride a pneumatic passenger car?  And why don’t we have pneumatic power operating our subways today?

FEATURING: Boss Tweed at his most bossiness, piano tunes under Broadway and something called a centrifugal bowling alley!

Alfred Speer’s moving sidewalk concept would have lifted pedestrians off the street and onto a moving ribbon that would have stretched up and down Broadway.

Read more about this curious proposal over at Scientific American.

An 1880 issue of Scientific American, the publication owned by Alfred Eli Beach that provided the impetus for many extraordinary inventions during the Gilded Age.

The ‘atmospheric railway’ which ran during London’s Crystal Palace Exhibition in 1864.

Another idea which transfixed New Yorkers (and in particular Boss Tweed) was the elevated viaduct which would have sliced through dozens of city blocks, creating an epic piece of architecture throughout Manhattan.

Beach’s ‘passenger tube’ which was displayed to great acclaim at the American Institute Fair in 1867:

Some images from Beach’s 1870 pamphlet on the pneumatic system:

An illustration from a newspaper of Beach’s workers ‘testing the position’ late at night over Broadway:

How an underground pneumatic tunnel would have been situated under Broadway.  Pictured here in relation to the new post office (which sat at the spot of the southern end of today’s City Hall Park).

Had the Broadway Underground Railway actually been fully developed, here’s what a station would have looked like:

Later application of pneumatic power in New York — shipping office tubes at a location at Franklin and Greenwich Streets (1905) and the series of mail tubes at the National City Bank, 1910.

Start with Joseph Brennan’s excellent research and presentation online.  Then jump into one of these great books on the history of New York City transportation — 722 Miles by Clifton Hood, The Race Underground by Doug Most, The Wheels That Drove New York City by Roger P. Roess and Gene Samsone and New York Underground by Julia Solis. There’s even a children’s book on this subject called The Secret Subway by Shana Corey and Red Nose Studio.