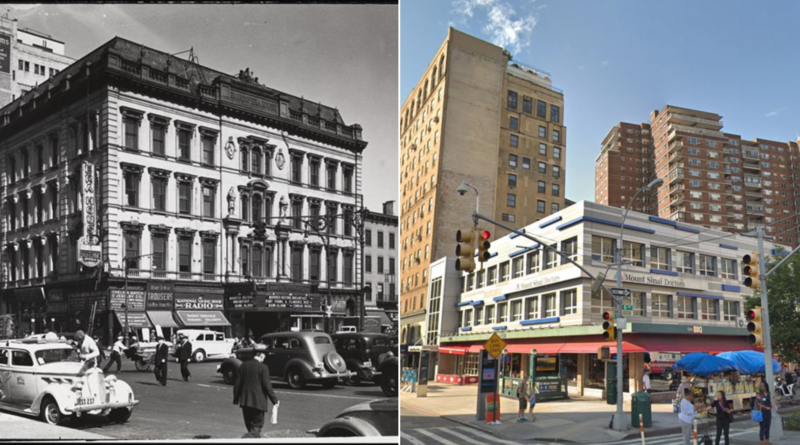 Diners today at Dallas BBQ, a popular Texas-size eatery at the northwest corner of Eighth Avenue and West 23rd Street, are probably not aware that they’re enjoying their ribs and daiquiris on the site of one of New York City’s most outrageous wakes.

For on this corner once sat the Grand Opera House, once owned by the two most notorious men of the Gilded Age.

Completed in 1868, it was the project of wine importer Samuel N. Pike, who purchased the land directly from Chelsea landowner Clement Clarke Moore. In fact, Moore’s mansion sat a short distance from Pike’s new investment.

The location is curious; the locus of high society was down at the Academy of Music on 14th Street, near Union Square. Within the next decade, other spectacular stages would move to 23rd Street — attracted to the cultural scene around Madison Square — but Pike’s Opera House, way over on Eighth Avenue, was perhaps too much of a trek for opera lovers. 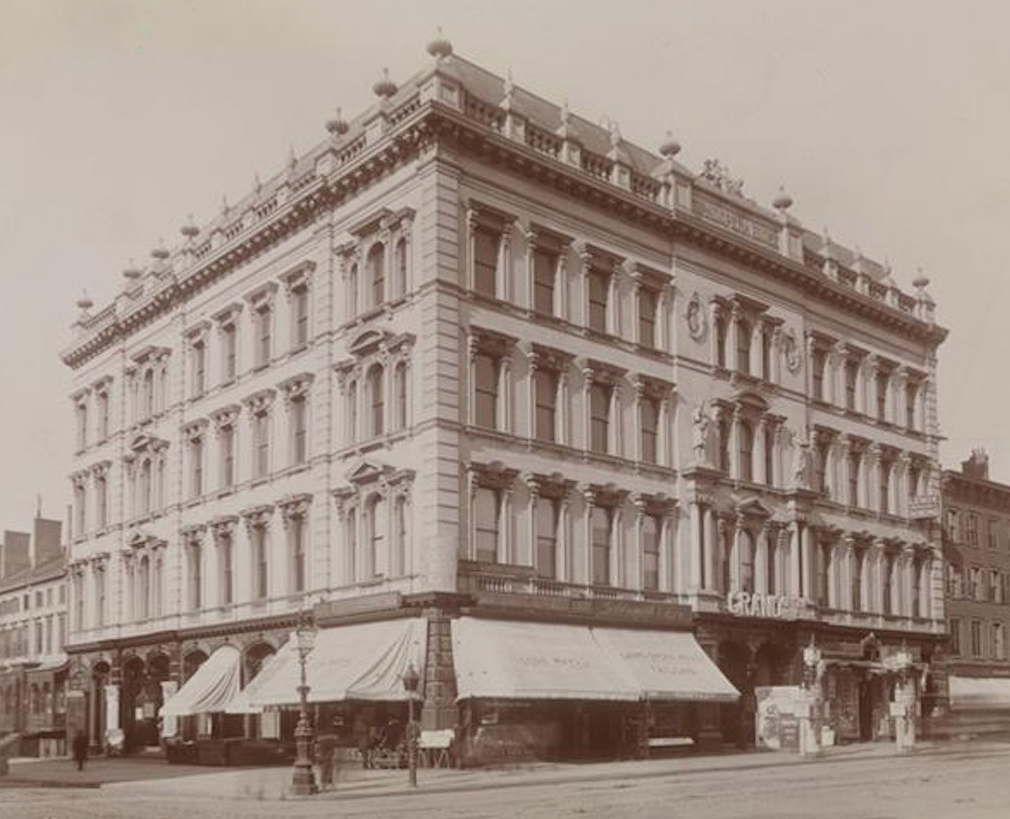 The opera house was soon sold to infamous industrialists and ruthless robber barons James Fisk and Jay Gould who democratized the offerings by introducing crowd pleasing burlesques and operettas with such names as The Bohemian Girl, The Three Hunchbacks! and La Belle Hélène.  Gould and Fisk also used the upper floors as offices where they cooked up elements of their infamous gold-market scheme, leading to a brutal financial crash on September 24, 1869.

For a time, the opera house itself became marred by their notorious plan. “The feeling against Gould and Fisk rose so high that their lives were in danger. They took refuge from the mob in the Grand Opera House where they lay in hiding for several days.” [source]

In 1872, “Diamond Jim” Fisk was shot and killed by the jealous new boyfriend of his ex-lover Josie Mansfield who often performed at the opera house. Fisk had become so associated with the opera house that his body lay in state here, attended by thousands of mourners and perhaps tens of thousands of curiosity seekers.

It must have been a spectacular farewell. From the Times: “The showy coffin, liberally adorned with gold-plated ornaments, rested on two low stands, and in this, garbed in the gold-laced uniform of the colonel of the Ninth [Regiment], lay Fisk,
his mustache carefully waxed, white kid gloves on his hands, and his feet buried in white flowers, in various devices.”

The opera house could never draw large audiences. Again, its location was a a drawback as the center of New York’s cultural events lay near Broadway. It abandoned most pretenses to opera by the turn of the century, focusing on vaudeville and even blackface performance. It was also rented out for special events (such as the Camp Fire Reunion of the 10th Regiment New York Volunteers in 1887):

As the New York Herald later mourned, “Only now and then a seeker after some novelty in diet would leave the beaten track of Broadway to cross to the West to see what the Grand Opera House was offering. Occasionally a melodrama of the most lurid type would be produced there and then the house would be filled nightly by the people on whom it could most surely depend. These audiences fell off alarmingly when a serious society drama or a revival of a Shakespearean peace went on.”

The opera house in 1925. Note also the beautiful old homes on 23rd Street that have also since vanished.

The article quoted above — published in 1922 — assumed the Grand Opera House was about to be torn down.  Instead, it hung on until RKO repurposed the theater in 1938, transitioning the old stage into a ‘modern cinema’ and renaming it RKO 23rd Street Theater.

It had a couple more decades of entertainment left in it but was finally closed for good on June 15, 1960.

And then — one final indignity. The closed theater then burned in a spectacular blaze on June 29, 1960. 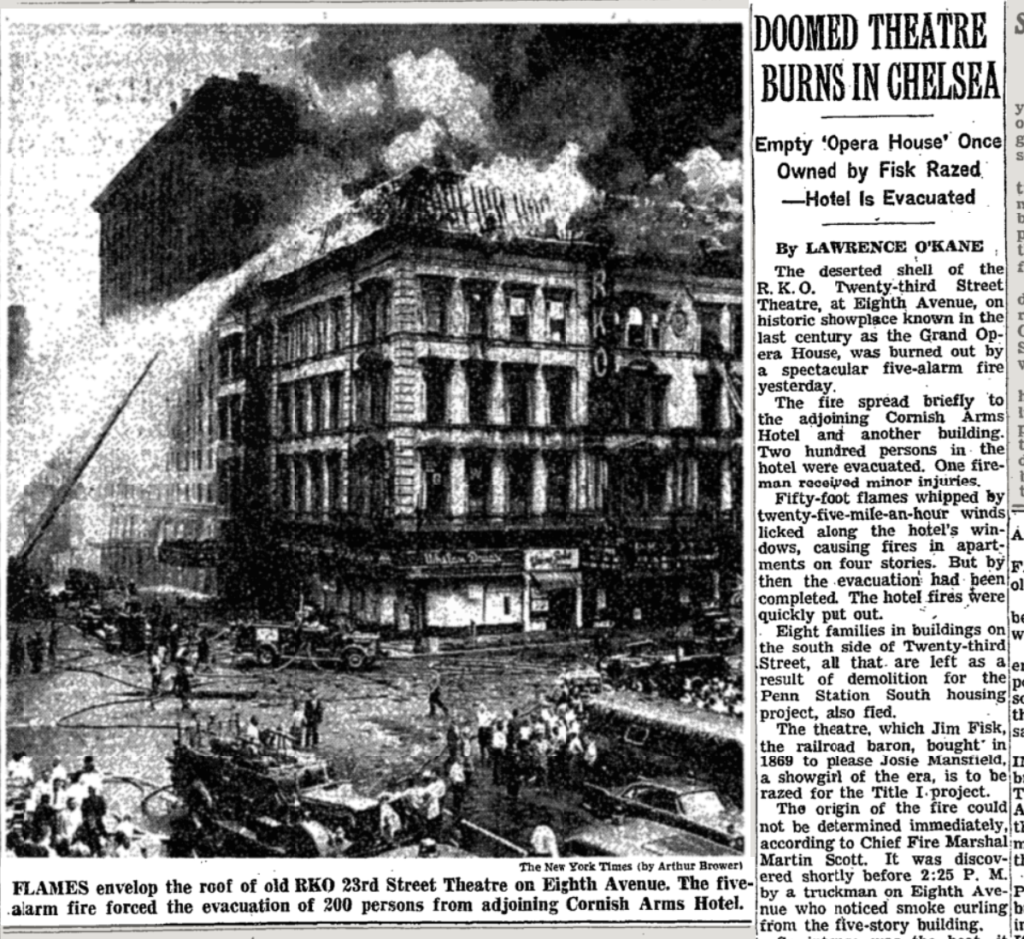