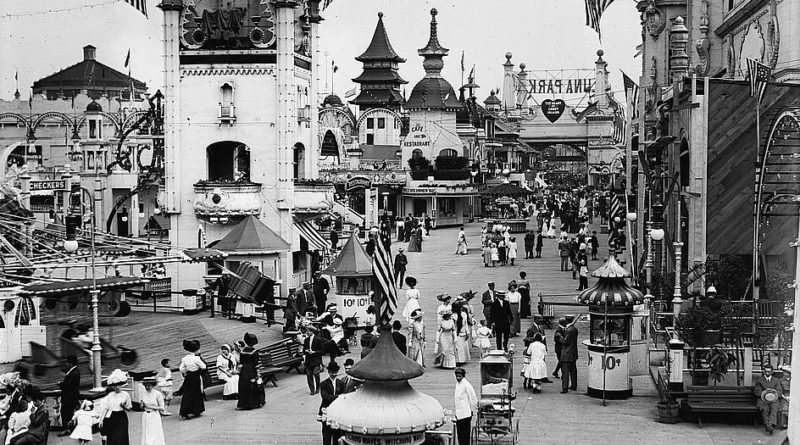 Hopefully you’ve had a chance to listen to our newest episode on the great landmarks of Coney Island. This is not our first trip to Brooklyn’s amusement district. In fact, we recommend checking out our other shows on the subject as they in total comprise a grand history of the place.

1) Begin with two very early shows, a two-parter on the general history of Coney Island

CONEY ISLAND: THE GOLDEN AGE
A world of amusement starts here in New York — Coney Island, the world’s oldest and strangest collection of amusement parks, a mishmash of sideshows, concession stands, gambling halls, new-fangled rides and luxury hotels. Take a daytrip with us back to the early days of Coney Island.

CONEY ISLAND: 20TH CENTURY SIDESHOW
Come see the Wonder Wheel, the king of hot dogs, the “Freaks” in the Dreamland Sideshow, a beached whale and Donald Trump’s dad — all in one place! It’s Coney Island in the 20th Century. But will it be around much longer in the 21st?

BRIGHTON BEACH AND MANHATTAN BEACH
Today it’s known as Brooklyn’s thriving Russian community next door to the amusements of the neighborhood of Coney Island. But a hundred years ago, the neighborhoods of Brighton Beach and Manhattan Beach were the homes of lavish hotels catering to the upper and upper middle classes. While many people were playing at Coney Island’s Steeplechase Park, Dreamland and Luna Park, the wealthiest were playing at the three most toniest hotels — Brighton Beach Hotel, the Oriental Hotel and Manhattan Beach Hotel. Find out the origins of these long-gone resorts and how they make their mark on the current neighborhoods.

3) Greg’s spin-off podcast The First actually visited the Wonder Wheel first! This history of the ferris wheel features a live recording at not one, but two great wheels.

The first Ferris Wheel was invented to become America’s Eiffel Tower, making its grand debut at the Chicago World’s Fair of 1893. The wheel’s inventor George Washington Gale Ferris was a clever and optimistic soul; he did everything in his power to ensure that his glorious mechanical ride would forever change the world. That it did, but unfortunately, its inventor paid a horrible price. FEATURING a visit to one of the most famous wheels in the world and a trip to one of Chicago’s newest marvels. (This is the debut episode of the Bowery Boys spin-off podcast series The First: Stories of Inventions and their Consequences, brought to you by Bowery Boys host Greg Young.)

4) And finally — why not try listening to our latest show while wandering around Coney Island yourself? Retrace our steps, hitting pause to pick up some beer or ice cream along the way.

THE LANDMARKS OF CONEY ISLAND