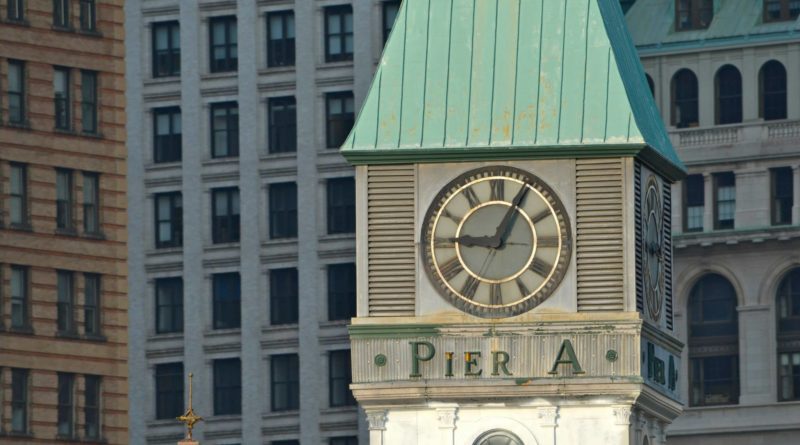 Manhattan’s shoreline was for much of its history crowded with piers of various lengths and structural integrities.

The western side of the island had the largest, most elaborate piers to serve enormous steamships and shipping vessels, large sheds that could accommodate thousands of people and tons of freight.

Pier A, originally built for use by the docks department, is the last surviving example of this grand tradition and is a striking one.  It was built between 1884 and 1886 with the Statue of Liberty in mind; not only are there clear views of Lady Liberty from here, but its tower roof is painted green to emulate her oxidized body.

Below: The pier in 1903, before the clock was installed on the tower.

However it’s the bling on top—an elegant 1919 clock—that’s the most eye-catching. It was installed as a World War I memorial on January 25, 1919, the first such commemoration here or anywhere in the United States.

From the New York Times: “Rear Admiral Josiah S. McKean, Chief of the Bureau of Operations of the Untied States Navy, will at noon today present to the city the ships clock donated by Daniel G. Reid. The clock has been installed in the tower at the river end of Pier 1, North River.”

Who was this generous donor? Reid was known as the ‘Tinplate King’, a metal mogul who eventually owned every tinplate manufacturer in the country — these are the days before anti-trust — before being absorbed by J.P. Morgan as part of U.S. Steel. He eventually became that company’s director.

Reid was a Fifth Avenue millionaire and lived in a lavish home off Central Park in 1919. (He lived there with his wife but filed for divorce just a few months after the clock was unveiled.) Today Reid’s carriage house on East 70th Street is a notable piece of Upper East Side architecture.

According the Brooklyn Daily Eagle, Reid’s gift was made to the city as a “memorial to those of our soldiers and sailors who have died in order that freedom might live.” One couple detail about the unveiling — According to the Eagle, “music was furnished by the band of the Street Cleaning Department.”

The organizers were aware then that this memorial was the first in the nation. It was installed over two and a half months after Armistice Day but several months before the Treaty of Versailles.

“This clock and bell will say ‘Bon voyage’ to all of us when we leave and ‘Welcome’ on our return,” Admiral McKean said, as reported in the New York Herald. “It will through its ship’s bell remind all hearers that while the great railroads bring thousands of visitors and thousands of tons of freight to the city the great ships are equally important to the commercial success of New York, which means the commercial success of our whole country.”

After serving as a fireboat station for many decades, Pier A famously fell into disrepair, a hopeless ruin in Battery Park, its clock hands frozen in time. Today the pier — a New York City landmark since 1975 — has been marvelously restored, and the restaurant Pier A Harbor House calls it home.

Believe it or not, this picture was taken in 2008. Today Pier A has been marvelously refurbished.

The article above is an expanded excerpt from the Bowery Boys book The Bowery Boys’ Adventures In Old New York, now in bookstores everywhere.