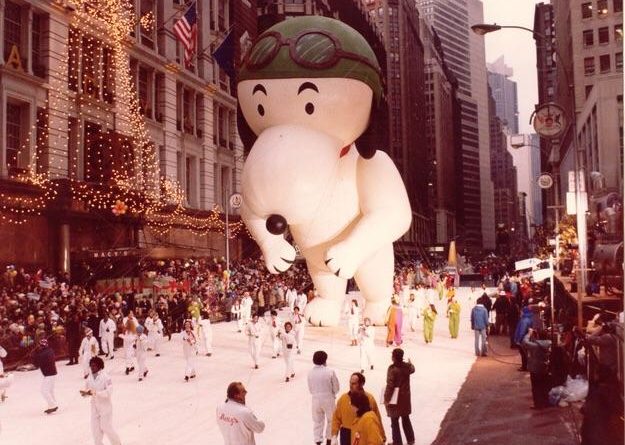 A familiar canine face greeted New Yorkers fifty years ago over the skies of Midtown Manhattan.

By 1968, Charlie Brown, Lucy, Linus and the other creations of Charles Schulz had appeared in four animated television specials, although their first (1965’s A Charlie Brown Christmas) was then and remains now the most important.

But there was one annual holiday tradition that had eluded these popular animated children — the Macy’s Thanksgiving Day Parade. It was up to Charlie Brown’s sassy dog Snoopy to finally make the leap from comic strip to the three-dimensional balloon size.

Snoopy was dressed in his signature aviator helmet and goggles, apparel worn during his fantasy moments as a World War I flying ace, geared to meet the Red Baron in aerial combat. The balloon was made at Goodyear Tire & Rubber Co. in Akron, Ohio, and when it was officially unveiled at the plant, a show pilot dressed in similar aviator garb flew around the inflated Snoopy in a biplane.

Snoopy’s inaugural appearance made headlines in the New York Times — “Good Grief! Snoopy Makes Macy’s Parade” — and the balloon helped cement Peanuts as a pleasant cultural tentpole for the holidays.

Meanwhile, science-fiction fans may have had their gaze lowered to street level. Among the usual string of celebrities making somewhat awkward appearances on parade floats were Broadway star Shirley Jones (a couple of years away from The Partridge Family), star of the film Chitty-Chitty-Bang-Bang Sally Anne Howes, and a gentleman you might suspect would have no particular patience for Thanksgiving Day parades — William Shatner.

Star Trek — an NBC program, like the parade broadcasts — was in the middle of it’s third (and last) season, and Shatner was out on the promotional front dressed as his character Captain James T. Kirk.

For unexplainable reasons which vibe with Macy’s Thanksgiving Parade strange logic, Shatner was riding in a float celebrating the Soap Box Derby, the youth soapbox car racing program that has ignited children’s imaginations since 1934. (Come to think of it, Shatner actually does seem like the perfect man to celebrate conveyances of unusual shape and size.)

The carefully choreographed parade of marching bands and floats was met a rather surprising disruption — protestors.

The Citywide Coordinating Committee of Welfare Groups, a welfare rights organization formed in 1966, sought to bring awareness to the city’s growing poverty crisis. Organizers had asked to march in the parade but, according to the Times, “could only do so if they entertained children.”

“I guess if we had 40 welfare mothers carrying a big balloon they would have thought that was appropriate,” said Hulbert James, the demonstration organizer.

At some point, in front of Macy’s, demonstrators were successful in crashing through the barrier and attempted to lift a banner that would have been seen on the national broadcast. Three demonstrators, all women, were arrested, and television viewers were spared the threat of New York City’s troubling reality disrupting their Thanksgiving preparations. [source]

Snoopy would go on to float in a great many Macy’s Thanksgiving Day parades — and in various ensembles. In 1969, he would sport an astronaut’s uniform (in honor of the Apollo 11 space program). More recent parades have seen Snoopy dressed as a skater and a holiday shopper. And as recently as 2015, Snoopy was even seen wearing the greatest accessory of all — his bird friend Woodstock.

However, despite this important anniversary for the beloved floatation novelty, only Charlie Brown will be seen in the sky for the 2018 parade. Snoopy’s disappearance in 2016 caused a minor controversy and he hasn’t been seen in New York City in balloon form since. The figure of Snoopy will be seen only in a modest float Snoopy’s Doghouse.

If you’re feeling nostalgic for Snoopy, here a few videos of the balloon in Macy’s parades past — including one appearance with Mariah Carey: