Can you believe this strange looking building was once sat in an extremely prominent area of Brooklyn?

Brooklyn’s most vital connection to the rest of the world has always been through its ferry landing, located across the East River from lower Manhattan. The first ferry service between New Amsterdam and Long Island came in 1642, linking newly settled Dutch farmers with the tiny port village. Within a few years, the Town of Breukelen was centered around that landing.

This point was still Brooklyn’s nexus of existence for this waterfront town when Robert Fulton brought his steamship service here in 1814. Renamed Fulton Ferry, the technological improvements allowed for a smoother, quicker journey — 12 minutes in total, and on a set, predictable schedule. The story of Brooklyn itself begins here as land developers took advantage of the ferry’s new conveniences to build desirable properties on nearby Clover Hill (to be renamed Brooklyn Heights).

Flash forward to the 1860s — thousands of people now live in City of Brooklyn, over a quarter of a million. And a great number of them work in Manhattan, taken to the ferry terminal by use of horse-drawn rail or carriages. If the city was ever going to compete with its more developed sibling across the river, they would need to dress up their most basic transportation structures. 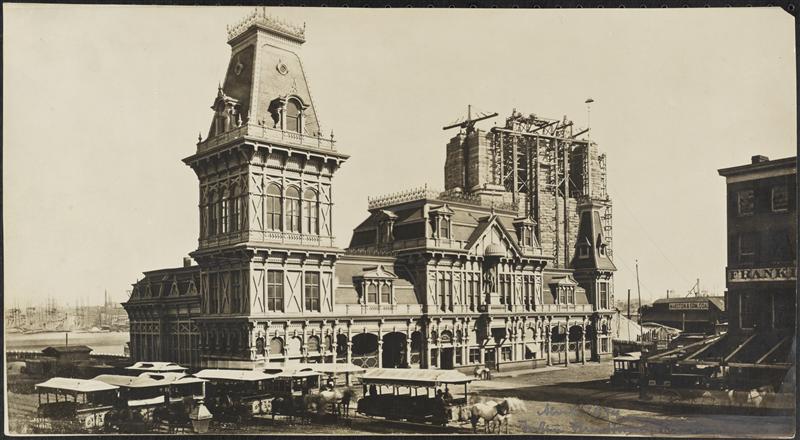 And so in early 1864 came a flamboyant ferry terminal designed by John Kellum, a cast-iron wonder in the Romanesque style with large windows and a mansard roof.  “There is probably, not a ferry in the world which, from unpretending commencement, has increased so rapidly in sterling value, in accommodations and comforts for passengers, and as an adornment of the city, as the Fulton ferry,” the New York Times declared.

From a James Smillie lithograph 1883:

“Spacious and elegant apartments will be provided for ladies and gentlemen, detained between the trips, and the well-known vender of confectionery and sodawater will retain his accustomed stall. The architecture of the main front on South-street will be bold and massive in design, and yet, from a judicious arrangement of the windows and arches, will present a light, airy, and highly ornamental appearance.” [source]

It was connected on the Manhattan side by a structure of equally fine — if certainly more muted — beauty. If Brooklyn’s ferry landing was a castle, New York’s was a fabulous shed.

There was some controversy surrounding the Brooklyn terminal’s all-iron design as many thought it would not property withstand the weathering conditions of a seaport.  People shouldn’t have worried about its durability as something else would eventually come along to make the Fulton Ferry Terminal obsolete.

The opening of the Brooklyn Bridge in 1883 announced a new way of crossing the East River. By this time, commuters had grown tired of cross the busy East River and looked at the great new bridge (and its two later companions — the Williamsburg Bridge and the Manhattan Bridge) as better ways to improve the journey. 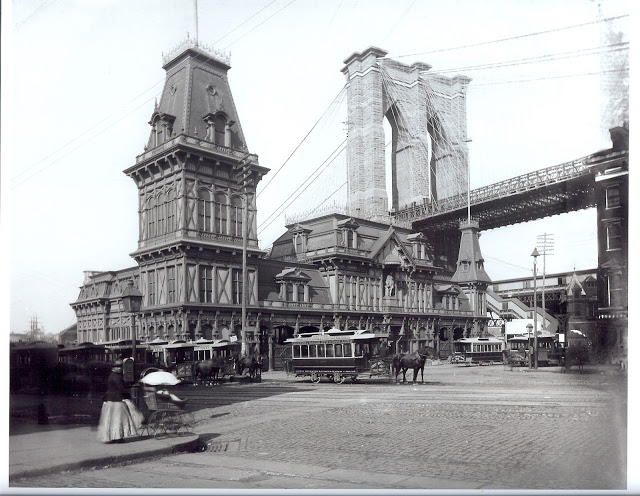 After almost three hundred years of continuous service, the Fulton Ferry shut down for good in 1924. The terminal remained until  it was badly damaged in a fire on October 8, 1925. “The fire, which necessitated the sounding of two alarms, ws extinguished after a long struggle. The flames at time rose so high as to illuminate the entire waterfront. It could be mainly seen from the Manhattan shores and attracted hundreds of motorists to the scene.” [source]

Just a year later — perhaps as a reaction to that great fire — the Fulton Ferry Fireboat House was built the next year. That classic structure now houses the Brooklyn Ice Cream Factory.

Believe it or not, however, you can still find a piece of that old ferry terminal in Brooklyn. A statue to Robert Fulton which once stood within the terminal was given a new home — Fulton Park in Bed-Stuy.

But that’s not the original statue! NYC Parks explain:

“The residents of Brooklyn Heights erected the original zinc statue of Robert Fulton near the Fulton Ferry House at the foot of Fulton Street. When the ferry was discontinued, the statue was sent to the Brooklyn Bridge Yard of the Department of Plant and Structures. It remained there until the Society of Old Brooklynites sought a new location for the monument. Brooklyn Parks Commissioner James J. Browne suggested Fulton Park. The Society recovered the sculpture and had it repaired in 1930; additional repairs and replication of missing parts were made by Parks crews in 1935.

In 1955 a new polished black granite base replaced the cast stone pedestal, the statue was replicated in more durable bronze, and the original deteriorated zinc sculpture placed at that time in the collection of the Museum of the City of New York. This replica was conserved in 2001 by the NYC Citywide Monuments Conservation Program. In 2010 the original sculpture was given to the Brooklyn Museum, where it is displayed.