The GANYC Apple Awards, given out by the Guides Association of New York City, celebrate the best in New York City culture, tourism and preservation. The Bowery Boys podcast has been deeply honored with two GANYC Apple Awards in the past — for Outstanding Achievement in Radio Program or Podcast (Audio/Spoken Word) and for Outstanding Achievement in Non-Fiction NYC Book Writing (for our book Adventures In Old New York).

And we are happy to announce that we will be HOSTING this year’s ceremony — on Monday, March 4, at the SVA Theatre in Chelsea! 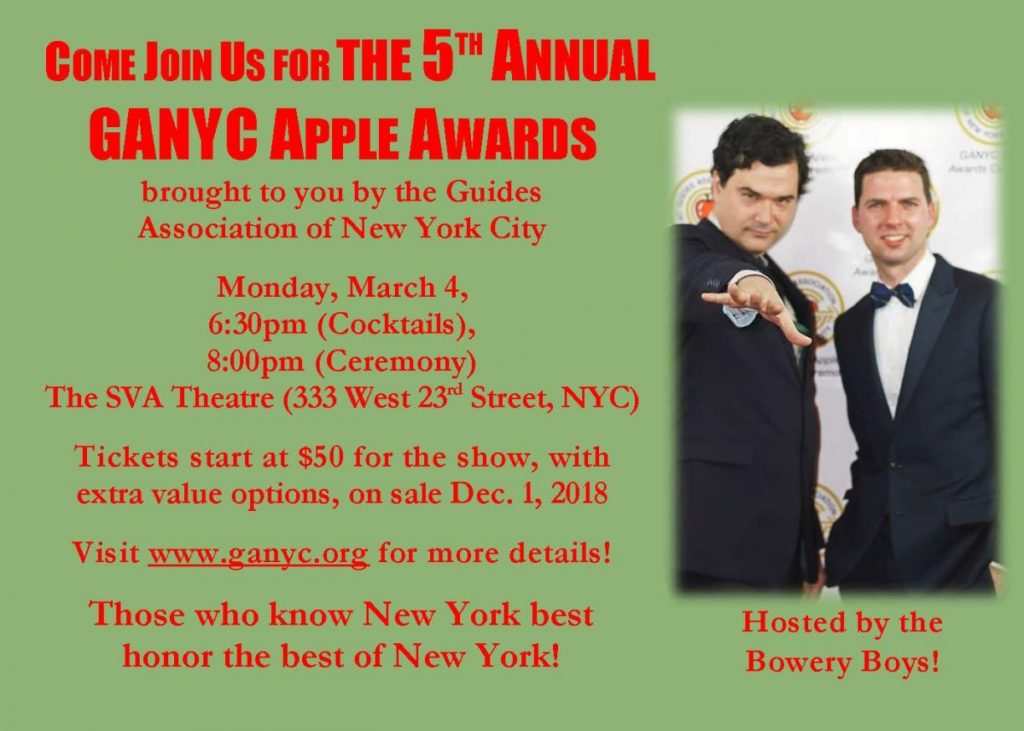 Get your tickets now and join us for an fun-filled celebration of New York City.

And familiarize yourself with this year’s brilliant nominees:

Outstanding Achievement in NYC Photography
An Rong Xu for The New York Times, Roderick George, in white, dancing with Josh Johnson on the outdoor stage of the structure built for “A Prelude to the Shed,” at West 31st Street and 10th Avenue in Manhattan
Taegin Reisman, Inwood Seal
Andrew Garn, Empire State Pigeon, from The New York Pigeon: Behind the Feathers
Adeline Lulo, Picture 3 from Childhood, Clermont Documentary Project

Outstanding Achievement in Essay/Article/Series Writing
What Climate Change Means for Urban Farming and Gardening, By Carrington Morris Photos by Christopher Simpson
Death of a Once Great City: The fall of New York and the urban crisis of affluence, by Kevin Baker
How to bring back mom and pop: NYC commercial rents are out of control; here’s how to restore sanity, By JEREMIAH MOSS
The Village Voice Is Officially Dead, BY CHRISTOPHER ROBBINS

Outstanding NYC Museum Exhibitions
Poetry in Motion at 25, at The New York Transit Museum
Never Built New York, at the Queens Museum
Heavenly Bodies: Fashion and the Catholic Imagination, at the Metropolitan Museum of Art
Comeback Season: Sports After 9/11, at the 9/11 Memorial Museum