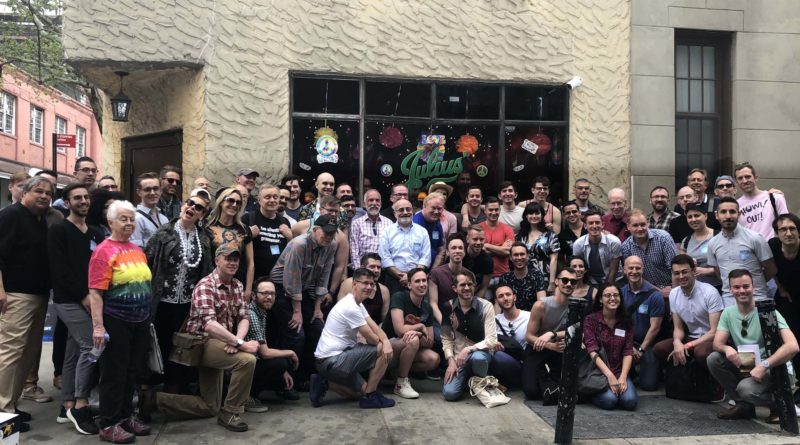 The Municipal Art Society will be providing 275 free walking tours this weekend as part of their annual Jane’s Walk NYC. That’s a lotta walking! This is the ninth year Jane’s Walk here in New York City, part of a global initiative celebrating the ideas of neighborhood advocate and city planner Jane Jacobs.

There are so many Jane’s Walk tours this year, led by volunteer guides, that they have a searchable database and an interactive map to help you locate the most interesting tour.

Here are a few tours that caught our eye including one featuring a Bowery Boys podcaster:

Immigration to the United States from the area of the former Ottoman Empire’s Greater Syria – now Syria, Lebanon, Israel, Jordan, Turkey, and Palestine – began in the 1880s. The most important neighborhood of the immigration — its economic and cultural heart — was along Washington Street in the Lower West Side of Manhattan. By showing what remains of the neighborhood, we will discuss Arab New York’s origins, geography, industry, tenement life, religions, journalism, and literary scene.
Guides: Todd Fine (CUNY-Graduate Center) and Joseph Svehlak (Friends of the Lower West Side)
When: Saturday 1pm

The Bronx
The Return of Starlight Park

This once-abandoned space by the Bronx River is now a scenic park. We’ll explore its curious history, including a would-be world’s fair and a legendary amusement park, while admiring the Bronx River Art Center’s temporary art installation “River Rising/Sube El Rio.” We’ll also look at the Bronx River Alliance’s new Bronx River House, learn about the next phase of the park’s expansion, and take a peek at the mysterious “Pillars of Moses.”
Guide: Stephen Paul DeVillo
When: Friday 6pm

The Ridgewood Reservoir in Highland Park is a 50 acre natural oasis on the Brooklyn-Queens border. Built in 1859 to supply the once independent City of Brooklyn with high quality water, it became obsolete with the addition of new reservoirs in the Catskills in the 1950’s and was decommissioned in the 1980’s. Since then, nature took its course in a perfect case study of ecological succession and lush forest has grown inside its basins.
Guide: Matt Malina, NYC H2O
When: Sunday 11am

President Franklin Roosevelt rescued the US from the Great Depression through his New Deal programs which employed people to build public works, restore the Great Plains and national parks, and make life better for ordinary Americans. In Red Hook, the New Deal built housing, a pool and recreation center, and a large new park. See these projects and learn more about Red Hook history, the impact of Hurricane Sandy, and the future.
Guide: Deborah Gardner, Roosevelt House at Hunter College
When: Sunday, 11am

Walk among the rolling hills of Freshkills Park while learning about the landfill-to-park project! We will meet at the address below and then visit normally closed sections of the project site. We will spend 1 hour hiking and discussing Freshkills Park’s history and engineering, with a focus on the site’s ecology. Participants will need to sign an activity waiver.
Guides: Terrance Caviness and Hannah Jaris, Freshkills Park
When: Friday, 1pm

Manhattan (Chelsea and Greenwich Village)
Gay Bars That Are Gone

From discos and dive bars to piano bars and cabarets, we’ll observe the shifting typology of the gay bar. Most importantly, we’ll hear from “those who were there” and indulge “those who wish they were”. All this, in the name of sparking a conversation about how to properly preserve and celebrate New York City’s “lavender landmarks.” If you’ve walked with us before, we’re highlighting some new LGBT historic sites this year – join us again!
Guides: Michael Ryan and Kyle Supley (with special guest Greg Young from the Bowery Boys podcast talking about the Limelight)

Tour descriptions above courtesy the Municipal Art Society. Image at top: From Gay Bars That Are Gone 2018, courtesy of Ianna Angelo.