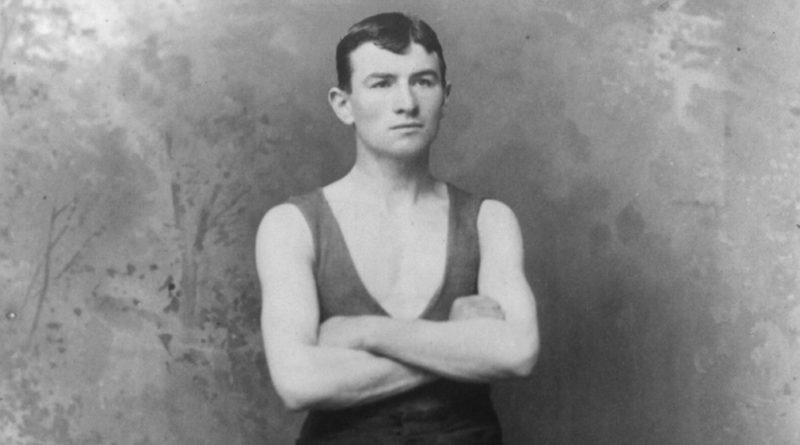 PODCAST A tale of the ‘sporting life’ of the Bowery from the 1870s and 80s. A former newsboy named Steve Brodie grabs the country’s attention by leaping off the Brooklyn Bridge on July 23, 1886. Or did he?

The story of Steve Brodie has all the ingredients of a Horatio Alger story. He worked the streets as a newsboy when he was very young, fighting the bullies (often his own brothers) to become one of the most respected newsies in Manhattan.

He experienced his first taste of adulation and respect as a minor sports celebrity, participating in pedestrian competitions across the country. Back in New York, Brodie started a family and promptly lost most of his money at the race track. He yearned to do something athletic and attention grabbing again.

The Brooklyn Bridge, completed in 1883, was a crowning architectural jewel linking two major cities; Brodie witnessed much of its construction during afternoons diving from East River docks. He now proposed an outrageous stunt that would garner him instant fame and fortune.

He would jump off the Brooklyn Bridge!

Was Steve Brodie a hero or a fool? A daredevil or a con artist? His story provides a window into the ‘sporting men’ life of the Bowery and a look into what may possibly be the greatest hoax of the Gilded Age.

A few of the creative illustrations of Steve Brodie in the days and weeks following his stunt.

You can watch the 1933 film The Bowery on streaming services and even get the entire thing — in pieces — on YouTube. Here’s the section of the film featuring Brodie’s ‘brilliant idea’ (at around the 5:30 mark). By the way, this film is riddled with offensive stereotypes so be warned!

The actor Steve Brodie, who made his name in Western films and televisions shows, took his screen name from the Bowery’s Steve Brodie. You can also see Brodie in The Beast from 20,000 Fathoms!

My thanks to Grant Barrett for allowing me to use a clip from A Way With Words. Hopefully you’re all listeners of his excellent show with Martha Barnette about the history of language. Barrett and Barnette have been producing the show since 2007.

And here’s an article I wrote back in 2007 (!) about two saloons on the Bowery — including Brodie’s. This was written for our FRIDAY NIGHT FEVER series about the history of New York City nightlife. Past entries can be found here .

We’re going way, way, way back to New York’s seediest, filthiest and most notorious place — the Bowery in the late 19th century.

The nightlife of the old Bowery could have an entire blog in itself. It has been witness to some of the rowdiest, most shameless and debauched New Yorkers who have ever lived. They filled up dives and flophouses, brothels and saloons,  and catered to the poorest of immigrants and the richest of the upper class ‘slumming it’ for a real idea of fun unimagined in the drawing rooms of the elite.

The two saloons from the late 19th century featured here weren’t extraordinary places as we would consider today — they would both fit comfortably in the 20th century sin-den the Limelight — but they were run by extraordinary people, ‘heroes’ of the Bowery brawler set.

Geoghegan’s at 105 Bowery has been described as “a rendezvous for professional mendicants.” Often called the Bastille of the Bowery, it didn’t just spawn a few fisticuffs; it catered to them. Because this two-floor boiserie featured two boxing rings, and one of the men in the ring was often the bar’s owner.

Owney Geoghegan held the boxing distinction of Lightweight Champion of America from 1861 to 1964 when he retired to open his tavern/fight palace in the Bowery. His reputation naturally drew the crowds, and Geoghegan encouraged his patrons on to a little pugilism with the help of ample ales and whiskey. In 1891 the ‘Bastille’ even hosted a few rather fierce bouts of women’s wrestling, with the competitors required to cut their hair (to prevent pulling) and costume themselves wearing only tights.

Such a swarthy establishment was bound to attract the lowest elements and the most sinful gangs of New York. One journalist at the time describes it: “The faces around us are worse than those seen in a bench show of pugnacious dogs, and instinct teaches us to have a care for our nickels, for our pockets are in imminent danger.”

But perhaps the person the clientele should have feared the most was Geoghegan himself. A short but powerful Irish man, Geoghegan was known for his impressive, compact strength. And his penchant to cheat when needed.

Geoghegan was in the ring one night against Viro Small, a very popular black wrestler. Geoghegan was still in his prime but it was clear he was being bested in the ring by Small. The drunken crowd kept catcalling him, and he knew he couldn’t lose in his own establishment. So he had one of his henchmen hold a gun to the referee’s head and call the match for Geoghegan!

(Small didn’t hold a grudge. He later wrestled there again, with a man named Billy McCallum who afterward tried to murder him.)

As Geoghegan flexed his strength to his barflies, another Bowery saloon owner was busy displaying his gifts of agility. In 1886 Steve Brodie, on a bet, jumped off the Brooklyn Bridge, the bridge being only about three years old at the time. What was amazing was not the amount of stupidity that took, but the fact that he survived and claimed his $100 bet money.

His feat was celebrated at the time and from the fame of this simple act, he was able to open Steve Brodie’s Saloon, 114 Bowery, at Bowery and Grand Street (a couple of doors down from Geoghegan’s place).

If Geoghegan’s dive was a celebration of his profession, Brodie’s was a celebration of his own personality. Behind the bar was an elaborate oil painting depicting Brodie bravely hurling off the bridge, along with a signed affidavit from the boat captain who fished him out of the water. The floor of the bar was inlaid with silver dollars to give it that wealthy feeling that money had been hurled to the floor.

For the cost of a drink, Brodie would gladly recount his tale. As silly as it seems today, he was able to pack in patrons, perhaps many from Geoghegan’s place, still drunk on booze and bloodletting.

Somehow he managed to turn his feat into a touring autobiographical performance entitled On The Bowery. Eventually, he tried to top his feat with a plunge down Niagara Falls in 1889. (It could never be proven that he actually went ahead with it!) He settled in Buffalo and opened another saloon there, but the enigma of his fame apparently didn’t carry that far. He moved to San Antonio and died at age 39.

Geoghegan had a similar short-lived fate. He lapsed into a severe depression at the death of his father and, traveling to Hot Springs, Ark., to try cure himself of his pain, actually died there, age 45.

As his obituary in the New York Times said: “There is mourning in the Bowery, sorrow on Houston and Bleecker streets, and desolation in the dance halls of the slums….. His career as a prizefighter, ward heeler and dive keeper was that of the typical New York rough, and is only interesting as it illustrates a phase of life little known to respectable people.”

Heirs to the vice of modern nightlife, take note.