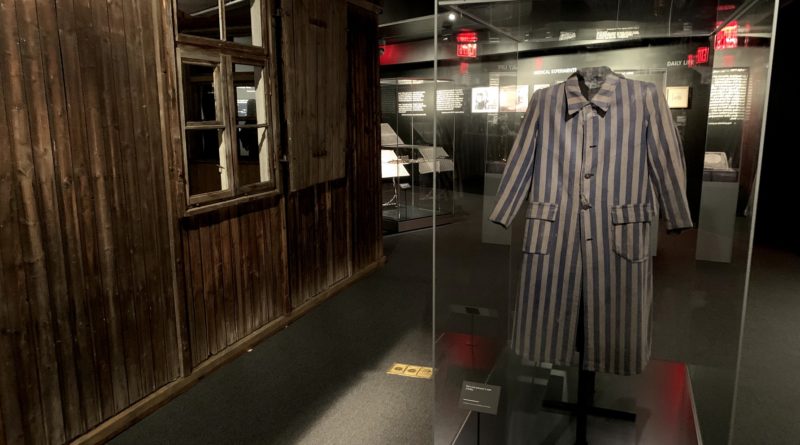 The Museum of Jewish Heritage, situated close to Castle Clinton and Pier A in Battery Park City, has always been a place of great fascination and mystery to me.

As both a memorial to those who perished in the Holocaust and a living museum with exceptional galleries devoted to the history of the Jewish diaspora, the space pulses with an intricate symbolism, positioned on the spot where millions of European Jews first entered the United States. The six-sided structure — with a six-tiered roof — represents the Star of David and the six million people who perished in the Holocaust.

The concept for their new blockbuster exhibit Auschwitz: Not Long Ago. Not Far Away,  a history of the Nazi concentration camp, would then seem to be too much for any human to bear. It just seems too much. Here in this perpetual monument to remembrance and grief, a look at the most grave and ghastly place associated with the Holocaust? Where more than 1.1 million people lost their lives?

You should get over your apprehension. Auschwitz is museum exhibition at its finest, a beautifully curated and arranged history, reintroducing the story of this grim atrocity with a clear, thorough vision. Even the design of the galleries — the flow from one room to the next — reveals aspects of this story. This may be one of the best museum exhibits I’ve ever experienced in New York City.

Auschwitz. Not long ago. Not far away.
The Museum of Jewish Heritage
open now through January 2020
Battery Park City, Manhattan

Auschwitz begins outside — with a rusted Deutsche Reichsbahn railroad car similar to those used in transporting millions of people to concentration camps through Nazi-occupied Europe. A few other stark artifacts — concrete posts taken from Auschwitz fencing, a woman’s lone shoe — align with the viewer’s conceptions of Auschwitz as depicted in popular culture.

Then the museum reboots those conceptions; prepare to understand this story anew. The first floor introduces the viewer to Jewish life in Europe, the first instances of anti-Semitism and the world events which gave rise to Adolf Hitler and the Nazi party.

The second floor lays out the Nazis’ intimidation techniques and their eventual use of concentration camps as a method to fulfill ethnic cleansing throughout Europe. (Although Auschwitz and nearby Auschwitz II-Birkenau are the focus here, camps were set up all through Nazi-occupied territory.)

The third floor takes you into the camp itself, arrayed with artifacts from the death chambers situated in black rooms, the final galleries completely washed of color.

But that is not the end of Auschwitz and perhaps you won’t believe me when I say that the exhibition ends with a strange sense of quiet and peace. The exhibition has presented atrocity with extensive and deeply drawn history and context. I felt like I had read an entire novel in one afternoon and all I wanted to do was pick up another one on the same topic.

The experiences of other groups imprisoned at Auschwitz — the Romani, Afro-Germans and homosexuals, among others — are well documented here, illustrating the full insanity of the Nazi’s white supremacist philosophy.

The exhibition is not tricked out, as is the current fashion, in flamboyant special effects. Huge murals and enlarged photographs add to the stories told by the exceptional collection of artifacts. And the audio guide is perhaps one of the best I’ve experienced in all my many years of audio-guiding through museums.