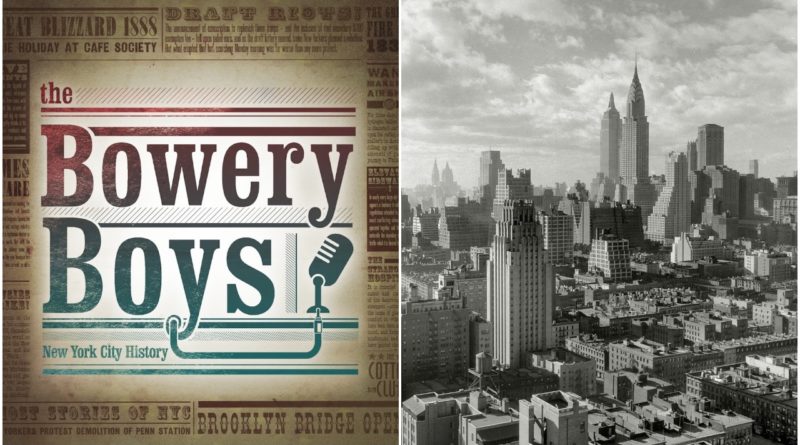 Welcome! Perhaps you’ve heard of the Bowery Boys: New York City History podcast but have not yet had the chance to listen. Or perhaps that back catalog of 251 shows is a little intimidating. (Hey, it’s intimidating to us and we recorded them.)

Or maybe you’re a regular listener of the show and you might have friends who would be interested. But how should you get them to start? Where to begin?

The ten shows below are what we like to call the Bowery Boys Starter Pack, ten podcasts that will give you a good sense of our show and a great overview of this city’s extraordinary history. You can listen to them on this page, of course, or you can find them using your favorite podcast players — iTunes, Spotify, Stitcher, Overcast and more. We’re pretty much everywhere you find podcasts.

And for more information on the Bowery Boys podcast, check out our FAQ here.

Start with one of our most recent shows first! This is the story of Greenwich Village as a character — an eccentric character maybe, but one that changed American life — and how the folky, activist spirit it fostered in arts, culture and the protest movement came back in the end to help itself.

2. The New York City Subway: Birth of the IRT
Next go to the most popular show we’ve ever recorded — no surprise, the subject is the subway! We’ll tell you about the construction of the first subway line, traveling miles underground through Manhattan and into the Bronx. How did the city cope with this massive project? And what unfortunate accident nearly ripped apart a city block mere feet from Grand Central Station?

3. Robert Moses: Did He Save New York … or Destroy It?
Of course, we pretty much drop the name of Robert Moses into every other show we record. And with good reason — he helped define 20th century New York City. Join us for this history of a very complicated man.

4. The Creation of Central Park
We hope that this first part of our two-part tribute to America’s most famous manicured park — even the hills were hand crafted — will change how you look at the park forever.

5. Bronx Trilogy (Part One): The Bronx Is Born
We love the Bronx and we bet you may not know that much about its origins. We introduce you to this part of old Westchester County — a natural expanse of heights, rivers and forests occasionally interrupted by farm-estates and modest villages — and walk you up to the year 1874, begin the process of turning this area into the borough known as the Bronx began. (The railroad was involved; so was a cemetery.)

6. The Lower East Side: A Culinary History
Tom ventures solo to experience the tastes of another era by visiting some of the oldest culinary institutions of the Lower East Side. From McSorley’s to Katz’s, Russ & Daughters and Economy Candy — when did these shops open, who did they serve, and how, in the world are they still with us today?

7 Billie Holiday’s New York
Grab your fedora and take a trip with the Bowery Boys into the heart of New York City’s jazz scene — late nights, smoky bars, neon signs — through the eyes of one of the greatest American vocalists who ever lived here — Billie Holiday. This a tour of the three great jazz centers of the early and mid 20th century — 133rd Street in Harlem, 52nd Street (aka Swing Street) in Midtown, and Greenwich Village.

8 Ghosts of the Gilded Age
Our annual Halloween podcasts are among our most popular and an excellent way to blend actual history with folklore and legend. In our ghost stories show from 2016, Greg and Tom highlight haunted tales from the period just after the Civil War when New York City became one of the richest cities in the world — rich in wealth and in ghosts!

9 Brooklyn Bridge
This is one of our earlier shows, focusing on the story of a true New York icon and the astonishing Roeblings who guided it into the skyline. Fall in love it all over again!

10 The Big History of Little Italy
We’ve reported on a great many New York City neighborhoods over the years, but this story of Little Italy and the magnificent journey of New York’s Italian community is certainly one of our favorites. This was the home of a densely packed, lively neighborhood of pushcarts, cheese shops, barber shops and organ grinders, populated by thousands of new immigrants in dilapidated old tenements. But there’s also a dark side to this neighborhood, memories of extortion plots by the Black Hand and a perpetual presence of organized crime.