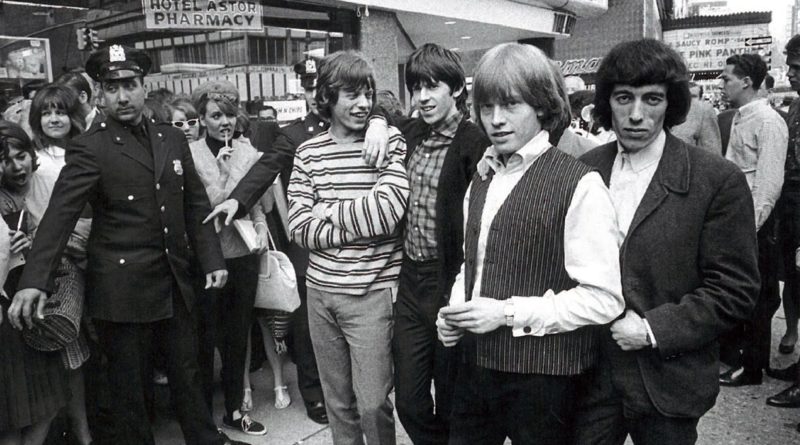 The Rolling Stones are the greatest touring rock act in history, spiraling from their formation in London in 1962 to become one of the most important cultural influences on earth.

So it’s kind of odd to think of them as a local act. And odder still, a New York act. But the Big Apple has a way of hypnotizing the most talented people and making its mark upon their creative output.

Trace the history of music in New York City in the latter half of the 20th century, and you’re bound to find Mick or Keith — performing for thousands or stoned in a hotel room.

Christopher McKittrick‘s new book Can’t Give It Away on Seventh Avenue is an intense and incredibly fun adventure, stuffed with fascinating trivia and bizarre anecdotes that feels like a virtual den packed with rock-and-roll memorabilia.

Knowledge and appreciation of the music of the Rolling Stones is not required (although you’ll certainly be tempted to dive into their catalog after you put the book down.) This is a devoted and boozy tour through the greatest music landmarks in New York City with the band members as your mischievous guides.

“Counting the number of times a member of the Stones jammed with another artist on a Manhattan stage,” writes McKittrick, “there is more Stones history in New York than in any other city in the world.”

The Stones brandished their bad-boy image from the moment they first arrived at JFK Airport in the summer of 1964, a scandalous alternative to the Beatles who had passed through the city just a few months before. They fell straight into the counterculture — visiting Cafe Wha?, Peppermint Lounge, Warhol’s Electric Circus, among other spots — while performing in venues as disparate as the Academy of Music and Carnegie Hall.

They earned their bad reputation almost immediately, luxuriating in the intense press attention — fist fights at the Playboy Club, late night parties at fabulous hotels. “In a move that was at least partially fueled by public relations, in late June the Stones sued fourteen of the most elite hotels in New York City … for refusing to book the band in mid-June before their 1966 American tour.”

By the time Mick Jagger became a resident of the Upper West Side in 1976, the band had become heavily influenced by the glamour and edginess of 1970s New York. They also frequented the rock stages of Greenwich Village and the jazz clubs of Midtown.

And yes, of course, even Studio 54 where Mick’s wife Bianca famously mounted a white horse on the disco floor. Even Richards has a special connection to the famous discoteque: he met his wife Patti Hansen there.

But one of the most iconic Rolling Stones appearances in New York was that time in 1975 when the band rolled around the city on a flatbed truck, a disruptive piece of theater that underscored their conviction for being impish.