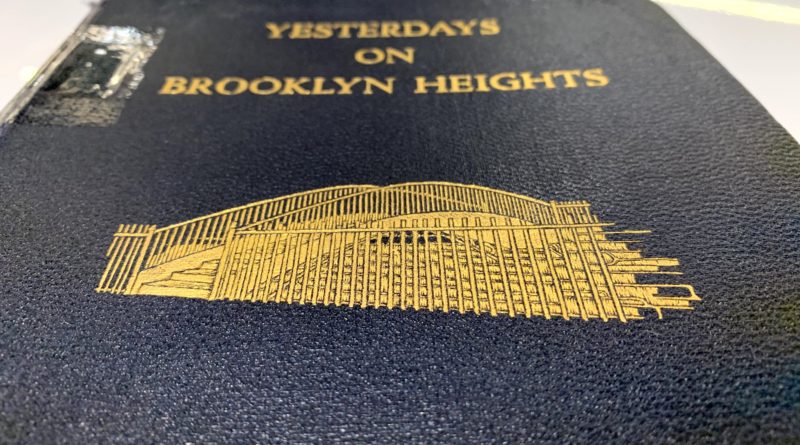 Have you ever checked a book out of the library and felt blessed to have something truly unique in your possession? A book that actually felt wrong for you to have? Did they mean to check this out to me?

That sounds over the top, but let me introduce you to a book that I borrowed a few weeks ago from the Brooklyn Public Library, a book which I used in research for our two-part Brooklyn Heights podcasts.

This is a numbered copy of the 1927 book Yesterdays in Brooklyn Heights, a history and recollection of life in the Heights in the late 19th century, written by James H. Callender.

The Callenders were an old Brooklyn family who resided on Columbia Heights, today the westernmost street in Brooklyn Heights and the one with some of the largest individual homes. His book is mostly a preservation of the social norms of elite Brooklyn, amply supported with letters of recollection written by past residents.

It’s a quaint, rather aloof celebration of life as it once was (for the elite wealthy WASPs, that is) but populated with colorful and even startling anecdotes:

[p. 74] To the south of those farms [meaning the Hicks and the Middaghs] were the possessions of the DeBevoise brothers, John and Roberts. The latter, through some cancerous affection, had lost his nose and palate and was an object of etrror to all the village urchins.

[p.77] At the end of the Heights, nearest the Old Ferry, stood the residence of Lodowyck Bamfer, a retired merchant, who had amassed a fortune in the Holland trade. To occupy his time in retirement he established a glass factory on State Street, which fabricated many bottles for the distillery, in addition to many articles of fine tableware, pieces of which, of rare beauty, are still in the possesion of many of the older Heights families.

All this wistful remembrance of exclusivity could get a bit claustrophobic. But I had a ghostly hand guiding me through the book — the original owner of the book who had apparently purchased or received it on January 14, 1928.

His name is Walter F. Carter and he has a spectacular story.

Carter was more popularly known as ‘Dutch’ Carter, a graduate of Yale University (1895) and a baseball player of immense talent (“probably the greatest college pitcher who ever stood on the mound“) and some renown. “He won fame at Yale University but refused to play professionally despite the fact he received some forty offers to do so.”

He was also the brother-in-law of Charles Evans Hughes, a former New York governor and failed presidential candidate.

Carter later worked at a Manhattan law firm but remained active in baseball management. In 1930 he became a member of the board of directors for the Brooklyn Baseball Club — aka the Brooklyn Dodgers.

By that time, Mr. Carter had already received this copy of Yesterdays In Brooklyn Heights, the very copy I now had in my possession.

(Meanwhile, his brother-in-law Hughes was appointed to the Supreme Court that same year. He would later become Chief Justice.)

Wondering through this book and discovering the things that interested Mr. Carter was more fun that actually reading the book. He made frequent notes through the volume….

He seemed very interested in the social constructs of old Brooklyn society.

He would have been a teenager (14-15 years old) during the Great Blizzard of 1888, an experience he notes at one point in the margins.

And then as I was following Carter through the book, something truly remarkable happened — a newspaper clipping fell out of the book. Lodged into the pages for so long that they browned the book pages on either side.

The clipping comes from the New York Herald Tribune (and reprinted here in the Brooklyn Daily Eagle in 1930) and is really peak wistfulness.

“Brooklyn Heights will still be Brooklyn Heights even through all its brick and brownstones and frame homes give way to tall apartment houses. It will still be one of the coolest, and quite the loveliest and by far the most convenient residence district in the greater city; but it will never again be the fashionable center of a city , as it once was, and it will never again be a garden spot; and the passing of the old Mansion House marks the close of another chapter in Brooklyn Heights’ history.”

Carter died in 1936 at age 62, “noted Yale baseball pitcher and one of Brooklyn’s best known citizens.” He died, of course, in Brooklyn Heights (on Monroe Place).

Thank you to the Brooklyn Public Library for loaning me a copy of this man’s well-worn, treasured book.