Pictured above: An elevated view of Stuyvesant Square and surrounding neighborhoods, ca. 1920-1935, photographed by the Wurts Brothers, courtesy Museum of the City of New York

Stuyvesant Town–Peter Cooper Village is not a New Amsterdam reenactment park, nor is it a celebration of the many inventions of the great Mr. Cooper. Rather, it’s one of New York’s largest residential developments, housing more than 25,000 people in an all-consuming mass of mid-twentieth-century brick apartment blocks that manages to create an almost sheltered, peaceful setting, with its central plazas, playgrounds, and leafy walks.

But in the nineteenth century, this area brought New York to light—literally. As gas lighting grew popular in the 1840s and gas-powered streetlamps were installed throughout the city, massive fuel tanks were built here to hold the city’s supply.

Oh, just imagine the pleasing aroma the Gashouse District must have given off! The district, north of the Lower East Side and against the water, was a comfortable distance from the Fifth Avenue parlors basking in its warm glow.

But ramshackle tenements sprouted up in the shadow of these massive tanks. So too did gangs of street thugs, like the Gas House Gang, never fearful that law enforcement would chase them too far into their putrid domain.

The district’s importance grew with the invention of gas-powered appliances and automobiles.

“Have you ever seen this phenomenon of the East Side?” proclaimed the New York Sun on March 1, 1914. “It is a weird spectacle. The garnet colored glow stains the entire gashouse district with its ruddy light, and momentarily brightens the great gas tanks, long dismal rows of them, which give the district its name—gloomy metal towers, floating on their unseen water bed, sinking into vague distances.”

And this wasn’t even the only home for gas tanks in Manhattan. Supplies for uptown New Yorkers could be found at East 62nd Street and York Avenue (pictured below, looming over a new stretch of York renamed Sutton Place) and even at 125th Street and Twelfth Avenue (near Riverside Park, at bottom). 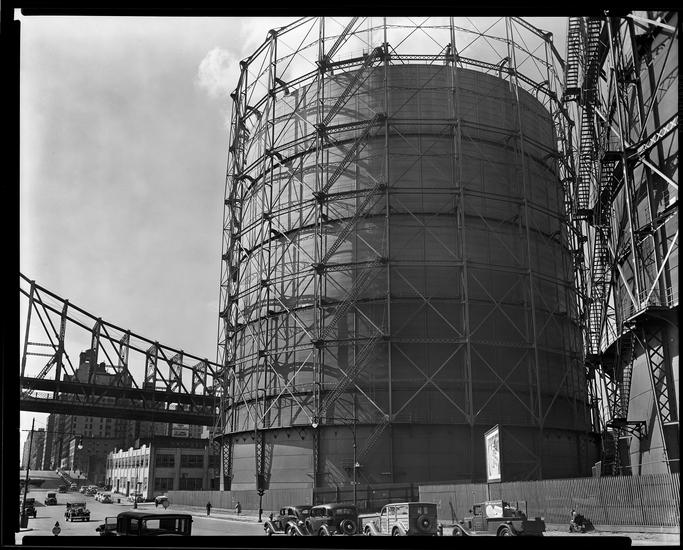 The historic Mount Vernon Hotel Museum with one rather unfortunate neighbor back in 1932.

Construction of the FDR Drive in the 1930s eliminated some of these “dismal” towers of the Gashouse District, and the need for middle-class housing cleared away the rest by the late 1940s. Today there are flowerbeds sprouting up in various parts of Stuy Town where nobody would have imagined such growth possible just 100 years ago.

Below: The Manhattan Valley Viaduct take Riverside Drive past a most unpleasant site, 1937.

And finally — a view of First Avenue in East Harlem, circa 1908, also graced with a gas giant.

This is an expanded version of an excerpt from the Bowery Boys Adventures In Old New York, now available in bookstores everywhere. 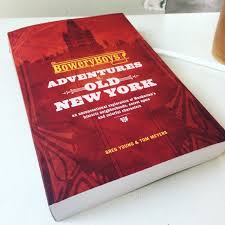