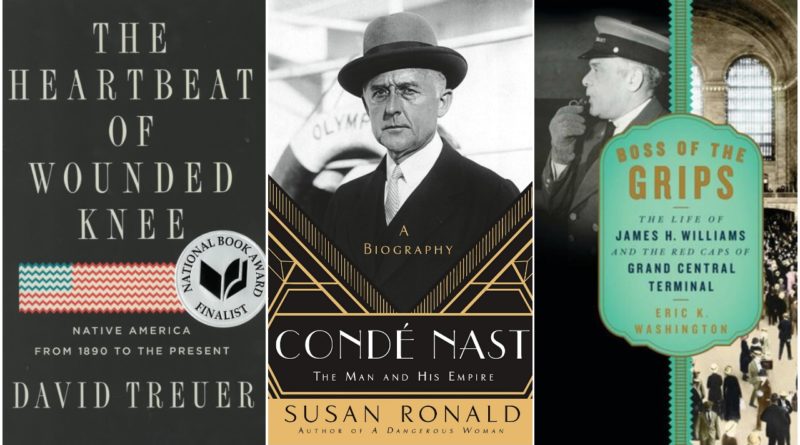 If you’re looking for a last minute gift idea for the holidays — or just looking to stuff your own stocking with a good read — check out this list of our favorite books of 2019.

Treuer’s groundbreaking hybrid of a book — both a history lesson and a moving memoir — has rightly scooped up critics’ awards this year for doing something that, on the surface, seems relatively straightforward — recounting the lives of indigenous people following the Wounded Knee Massacre in 1890.

Yet Treuer’s unique gift of speaking about so many American Indian nations so clearly and passionately — the author himself is Ojibwe from the Leech Lake Reservation in northern Minnesota — makes this the most essential American history book of 2019.

Boss of the Grips
The Life of James H. Williams and the Red Caps of Grand Central Terminal
by Eric K. Washington

During the glamorous years of train travel, passengers at Grand Central would have been assisted by Red Caps, a fleet of well-dressed black porters who kept the world famous train station humming for decades. For almost a half century the Red Caps were led by James H. Williams, the son of freed slaves who worked his way from New York’s flower district to become one of the most prominent African-American businessmen of his day.

That alone would have made a fascinating biography. But the strength of Boss of the Grips is Washington’s absolute command of the broader story surrounding Williams, the lives of urban African-Americans in the late 19th and early 20th centuries. This is an indispensable story of the black experience and one that seldom gets noticed in other New York City history books on this period.

What made the Plaza so exceptional when it opened in 1907 was that its treasured exclusivity could be admired by the public. The wealthy classes, escaping the confines of Fifth Avenue mansion living, began gallivanting in hotels like the Plaza where their fashions and foibles could be spied upon by the world at large.

But Satow, a real estate writer and New York Times contributor, never treats the Plaza Hotel, a luxury accommodation that most of us have never stayed in, like an untouchable antique. In retelling its history, she always links it to the city at large, to the changing whims of the metropolis.

The Guarded Gate
Bigotry, Eugenics, and the Law That Kept Two Generations of Jews, Italians and Other European Immigrants Out of America
by Daniel Okrent

Okrent (Great Fortune, Last Call) has produced his most vivid, most intense history yet, a look at the moment where the eugenics ‘craze’ meets the anti-immigration movement.

By the 1890s, Ellis Island was processing thousands of immigrants everyday from Italy and Eastern Europe, people deemed inferior in the eyes of bigots from conservative Boston elites to racists in the post-Reconstruction Era South. Eugenics, a tool of ‘selective breeding’ already cruelly aimed at society’s most ‘feeble-minded’, would be brandished by those who wished to label whole ethnic populations as inferior.

Separate
The Story of Plessy v. Ferguson, and America’s Journey From Slavery to Segregation
Steve Luxenberg

The 1896 landmark Supreme Court decision Plessy v. Ferguson embedded and legitimized the practice of “separate but equal” into American life in the 20th century. The decision built racism into the fiber of everyday activities — schooling, housing, medical care, public transportation — and elevated personal prejudices into the realm of legality.

Separate follows the lives of three men crucial to the outcome of the decision — the firebrand white Northern journalist Albion Tourgée and Supreme Court justices Henry Billings Brown and John Marshall Harlan. From different states and backgrounds, the stories of these three men hurtle towards that fated moment in 1896 when their collective experiences lead to a damaging climax.

An American Odyssey:
The Life and Work of Romare Bearden
Mary Schmidt Campbell

In Campbell’s absorbing biography of the painter, illustrator and collagist Romare Bearden, we get to look at the New York City art world of the 20th century with insights into the life of an African-American painter who managed to remain relevant in a career of almost 60 years.

Romare developed into both an renowned artist and an insightful critic of the art world, setting up a studio right above the most famous place in Harlem — the Apollo Theater. It was here that he later pivoted his style away from concrete representational forms, finding his own path into the world of abstract modernism.

Condé Nast
The Man and His Empire
Susan Ronald

At the center of all things cosmopolitan in the early 20th century — fashion, magazines, the witty knights of the Algonquin Round table — was Nast, the visionary publisher of Vogue and the first Vanity Fair who essentially created the idea of the modern magazine and, in many ways, the paragons of modern American living.

Brimming with anecdotes from Gatsby-era New York, Nast’s jaunty biography keeps a witty step with its subject, and supporting appearances by Dorothy Parker and Frank Crowninshield will keep you on your toes.

FLASH
The Making of Weegee the Famous
Christopher Bonanos

The life of the photographer Weegee is the stuff of film noir fantasies.

His discoveries were infinitely more gruesome, traumatizing. How did he manage so many photographs of so many hideous events — murders, suicides, stabbings, shootings, fires, fistfights?  How did he manage to pop up at all these vicious moments, a genie in his 1938 Chevrolet? It was no magic; it was moxie. (Okay, and a police radio.)

Flash brings the reader a glorious selection of stock figures from the New York underworld, all captured by Weegee at their most disgraced or tragic. On occasion, he was known to arrange photographic images, but he never faked a moment. The spirit of all his images is absolute truth, if not, say, literal truth.

When Brooklyn Was Queer: A History
Hugh Ryan

When Brooklyn Was Queer embarks on a modern quest to find the roots of the LGBTQ community in the pages of history.

While emotional or sexual desires might be similar to ours today, the visibility back then of those we might label gay, lesbian and transgender was either in performative contexts (vaudeville or sideshow entertainers) or ephemeral in nature (encounters in late-night saloons). The most celebrated individuals — the writers, artists and dancers — were often cloistered away in townhouse parlors in Brooklyn Heights.

Ryan allows the transformation of Brooklyn from city to borough to parallel the shifts in modern thinking about gay and lesbian encounters, marking a path from Walt Whitman to the lesbians who worked at the Brooklyn Navy Yard.

American Eden
David Hosack, Botany, and Medicine in the Garden of the Early Republic
Victoria Johnson

If you know Hosack at all, it’s because of his association with Alexander Hamilton and Aaron Burr. He was the doctor of both men and attended to Hamilton after his fateful duel with Burr in the summer of 1804. In fact, Hosack’s visionary garden — a repository of exotic plants in the area of today’s Rockefeller Center — was constructed at about the same time as Hamilton’s upper Manhattan home Hamilton Grange.

In Johnson’s excellent new biography on Hosack, this hidden associate of the Founding Fathers comes alive, his contributions to early New York history and American science celebrated at last.