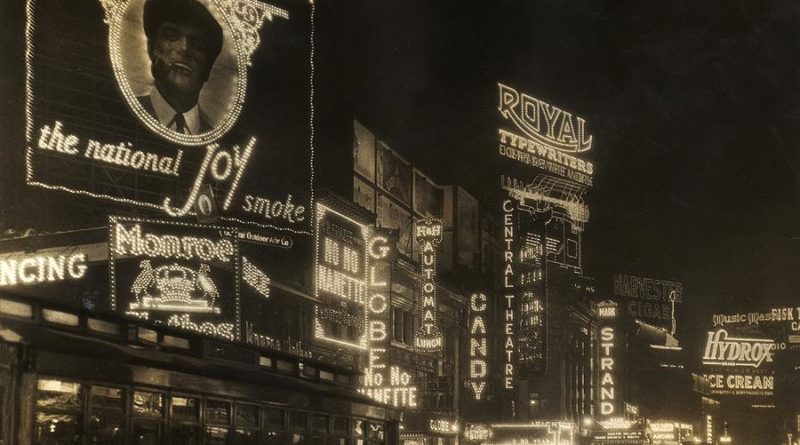 One hundred years ago, American rang in the 1920s in a most somber and sober way. The perception of the next several years becoming characterized in American culture as a gay and frollicking decade — a ‘Jazz Age’ — was far from the minds of Americans in 1920. From the New York Times (1/1/1920):

“Hard hit by the war and overshadowed by the great Armistice Night celebration, the riotous New Year’s Eve of a year ago failed to return to its haunts last night under the most favorable weather conditions. Cause: Prohibition!”

Some may have a similar feeling of dread or melancholy as we enter another decade of the ’20s. One hundred years ago, Americans saw the birth of jazz music, sound motion pictures and radio. The country took advantage of its post-war supremacy and witnessed a remarkable economic boom — then saw it promptly evaporate at the end of the 1920s.

Prohibition inspired an artistic counter culture and a creative revolution; it also spawned the ascent of organized crime and the return of the Ku Klux Klan.

To understand our future, it’s important to understand the past. On the Bowery Boys: New York City History podcast, we’ve covered many subjects relating to the 1920s — with so many more yet to be explored.

This Friday we will look at the history of one of New York City’s greatest engineering marvels of the 1920s, a symbol of American inventiveness and the rise of the automobile.

Get in that Roaring 20s mindset by visiting this collection of shows, exploring New York City during the 1920s — from the dance floor of the Cotton Club to the desk of New York’s Night Mayor.

JIMMY WALKER, MAYOR OF THE JAZZ AGE
The 1920s were a transformational decade for New York, evolving from a Gilded Age capital to the ideal modern, international city. And the king of it all was Jimmy Walker, who was elected mayor of New York City just as its prospects were at their highest. His wit and character embodied the spirit (and the spirits) of the Roaring ’20s. What could go wrong?

TEXAS GUINAN: QUEEN OF THE SPEAKEASIES
Texas Guinan was the charismatic and sassy hostess of New York’s hottest nightclubs of the 1920s. Her magnetism, sharpened by years of work in Hollywood, would make her one of the great icons of the Prohibition era. Her associations with rumrunners and gangsters were certainly dangerous, but her unique skills and charms allowed her an unprecedented power on the edges of a world fueled by the ways of organized crime.

THE ALGONQUIN ROUND TABLE
New York City was the capital of publishing by the 1920s, and the writers, critics and bon vivants who gathered for lunch at the Algonquin Hotel during this period helped define the eras style and sass.

THE COTTON CLUB: “THE ARISTOCRAT OF HARLEM”

As one of the most famous nightclubs of the Roaring ’20s, the Cotton Club launched careers and electrified New York’s raging nightlife although its policies of segregation tarnish its musical reputation. This show is full of music to get you in the mood for a Jazz Age summer!

THE LIFE AND DEATH OF RUDOLPH VALENTINO

Few events in New York City during the 1920s typify the decade’s feverish creation of the modern celebrity more than the death of silent screen idol Rudolph Valentino, a former dancer in Times Square nightclubs who became America’s most exotic movie star.

The movie star was one of the most vibrant — and dangerous — performers on the New York City stage in the 1920s. She would get her inspirations from the ladies of the speakeasies and the alternative cultures of Greenwich Village.

THE WALL STREET CRASH OF 1929: NEW YORK IN CRISIS

And yet a more immediate crisis was awaiting Walker, the so-called Night Mayor of New York.

And we have many other shows that spend a good deal of time in the Roaring 20s (although the individual subjects expand into other eras). If you’d like to expand into those, please check out:

Walker, in the eyes of many, could not fill her mother’s shoes. So, in the 1920s, she decided to wear her own, becoming an impresario — empress-ario? — of the Harlem Renaissance, befriending and fostering the talents of America’s greatest black writers, artists and creators.

In this episode we observe the growing independence of American woman and the changing beauty standards which arose in the 1910s and 20s, bringing ‘the painted face’ into the mainstream — thanks to two enterprising businesswomen.

New York and the World of Radio

The discovery of radio changed the world, and New York City was often front and center for its creation and development as America’s prime entertainment source. In this show, we take you on the 50-year journey, from Marconi’s newsmaking tests aboard a yacht in New York Harbor to remarkable experiments atop the Empire State Building.

— The Great Gatsby’s New York City in ten different scenes, from the Queensboro Bridge to the Plaza Hotel

— All that Jazz: Cinema History on Broadway and 52nd Street