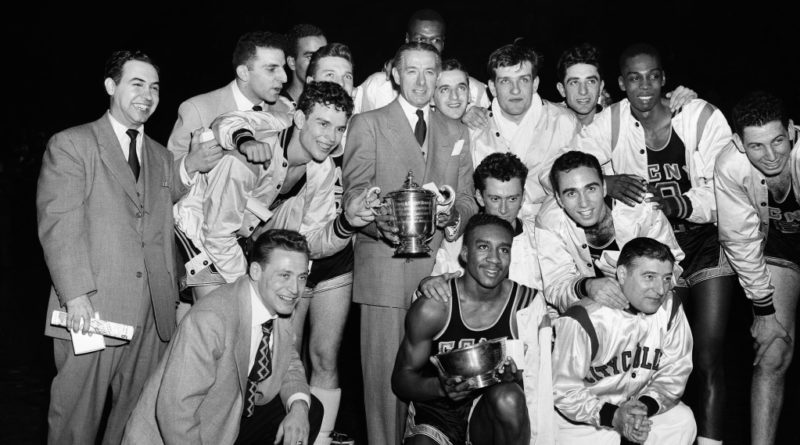 The game should have gone down as one of the most triumphant moments in New York City sports history.

An underdog team of college athletes from City College of New York had done the unthinkable, winning the 1950 NCAA championship in front of a throng of supporters at Madison Square Garden.

They were no ordinary team. Comprised of Jewish and African-American students raised in Brooklyn and the Bronx, the City College team represented the future of college basketball — and the integration of American sports.

“The City College Beavers had defeated all comers,” writes Matthew Goodman, “from every part of the country, in much of which the idea of a home team comprising only blacks and Jews would have been met with amusement or derision or contempt.”

Today their victory rings more infamously within the halls of sports history, the harbinger of a scandal that would ruin the futures of its players forever.

Goodman’s last book Eighty Days followed the intrepid journalists Nellie Bly and Elizabeth Bisland on a thrilling race around the world. In The City Game, the action remains in the five boroughs, playing out within two principal arenas (law enforcement and college sports) united by the worlds of illegal gambling and match fixing.

Bookmakers ran a barely disguised ring of gambling linked to all the major New York City sporting events, but its attachment to college sports seems especially insidious here. Everybody was profiting handsomely from college games, betting on point spreads — except the players themselves.

In particular, thousands flocked to Hell’s Kitchen and the Garden (“the Mecca of college basketball,”) hoping to make a little money. This would explain the volatile reactions of fans towards players who failed to make a shot. Goodman writes:

“By 1950 as much as $300,000 was routinely being wagered on Madison Square Garden college basketball games. ‘You could place a bet in any corner of the Garden’, says Bernard Laterman, who played CCNY freshman basketball during the 1949-50 season.”

If everybody was getting rich off of college games, why couldn’t the players? By point shaving, players could be paid to modulate their games, keeping scores within a certain range. Such manipulation began to look good to the players of City College — motivated by peer pressure and financial necessity.

The City Game always pays heed to the larger forces at play; such bookmakers were often protected by law enforcement and clandestine arrangements with the government itself — “the system of favors and tributes and emoluments that kept the city running, that got statutes passed and buildings built and candidates elected and, for some, fortunes made.”

Because of the pervasive nature of city corruption, an investigative squad was formed in secret on January 2, 1950, at the Hotel St. George in Brooklyn Heights. A pool of young fresh-faced recruits of the New York City Police Department would spy of their own forces, listening for crooked deals between cops and bookies.

Their story plays out like a fantastic crime thriller. For the players of CCNY, the story has a more tragic outcome.

Footage of the Beavers’ victory at Madison Square Garden, March 28, 1950: