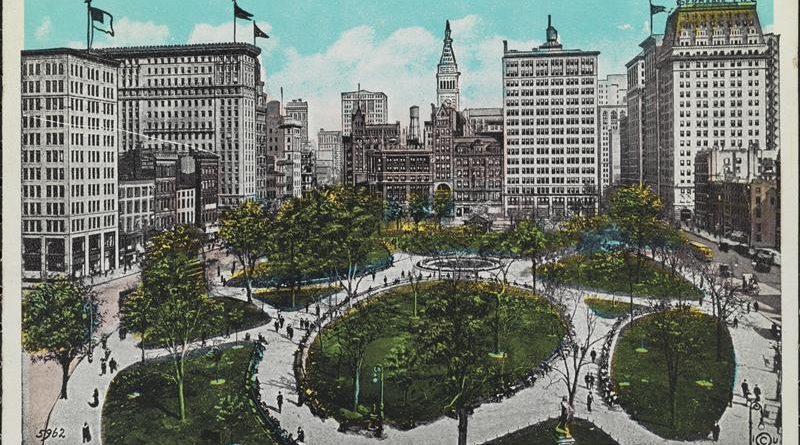 The most historically important section of Manhattan’s Union Square may be that large paved open space to its north.

Free of lofty monuments and manicured lawns, this visually plain spot — hosting farmer’s markets on the weekend — has been the center of thousands of gatherings and political protests since it was created (by Frederick Law Olmsted and Calvert Vaux, no less) almost 150 years ago.

The iconic landscape designers called it the ‘muster ground’. “It would, on any occasion of necessity,” they wrote, “be a convenient and suitable position to place and hold in readiness for service a large and small body of troops.”

That the ‘muster ground’ would quickly evolve into one of New York’s most evocative places of protest is indicative of the overall unique story of Union Square, our city’s most protean public park.

You will no longer think of Union Square the same way after reading Joanna Merwood-Salisbury‘s beautifully and richly detailed history of this very misunderstood public place. A former professor at Parsons School of Design, Merwood-Salisbury began her work on Union Square’s history after teaching graduate architecture students from a classroom a block away from the square.

It’s a park easy to take for granted. Stuck within a busy confluence of streets — New York’s notorious ‘Dead Man’s Curve’ was once at its southwestern corner — Union Square is most often passed through than truly admired. People speed down to the massive subway station beneath or meander through its holiday market.

But Union Square were rarely ever dignified; instead it became an egalitarian alternative to the elite homes built surrounding it. Tributes to George Washington and Abraham Lincoln — once situated at the southern corners of the park — granted the park a patriotic personality, but by the end of the century, it was better known as gathering spot for labor unions, free speech advocates and May Day rallies.

This tug-of-war between appropriate patriotism and incendiary protest continued into the 20th century even as the surrounding neighborhood became a middle-class shopping and entertainment destination.

And the park remains a restless spot today — some may say unsatisfying. It’s a safer place to be than it was 40 years ago and nods to its history decorate the meandering paths. There are no dark spaces, no quiet places here. Just steps from Washington’s noble presence, you’re still bound to find an illuminating protest or an impromptu show — or both.