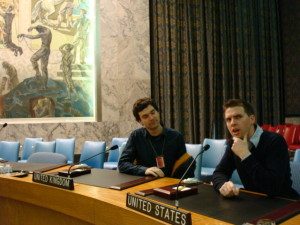 Jack Straw and Condi Rice (as played by the Bowery Boys) sit debating at the U.N. Security Council

For many years, New York’s premier sporting venue was the Polo Ground. Wanna see what’s left of it? [City Room]

Ever walk by the New School and wonder what that convex-fronted building at 61 Fifth Avenue was? Jeremiah checks it out. [Vanishing New York]

And let’s check in on latest on one of my personal decaying New York landmarks, the Renwick Ruins. Replace it with a chic waterfront eatery! [Roosevelt Islander]