Definitely something you’ll need to click into to see all the rich detail, but below is a copy of a British map run in the London Gazette, outlining the trek of the British soldiers in New York and Brooklyn (then entirely called Long Island). Although quite distorted, it references some of the main points in their push through the Brooklyn lands, including New Utrect, Gravesend (where they first landed), Bedford. A second map below that better illustrates the Jamaica pass, and how the British were somehow able to sidestep most of Washington’s forces 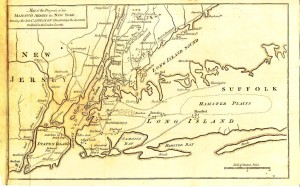