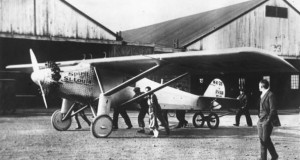 One very important American airfield associated with the city was omitted from this week’s podcast. Roosevelt Field was actually just outside the city of New York in Nassau County. Today it’s a 50 year old shopping mall! However, the most famous solo flight in human history originated from here over 80 years ago.

The Army-owned field was named in 1918 for Quentin, the son of Theodore Roosevelt, who died that year in a World War I air battle over France. Almost ten years later, on May 20, 1927, Charles Lindbergh lifted off on his famous trans-Atlantic voyage, in his “Ryan M-2 strut-braced monoplane” the Spirit of St. Louis. The moment he landed in Paris 33 and a half hours later, he became the most famous man in the world, the first to successfully attempt the Atlantic crossing non-stop.

What’s sometimes glossed over is that Lindbergh and many other men were attempting this dangerous stunt to win prize money. A New York hotelier Raymond Orteig had eight years previously offered the fabulous sum of $25,000 to the first crew of the first successful transatlantic flight. With the prize, of course, came history and instant fame. Roosevelt Field saw most of these early attempts, and many deaths from unsuccessful attempts to achieve it. Lindbergh not only succeeded in a decent time, he did it by himself.

As for Roosevelt Field, although part of it would be reconstructed as a racetrack, it would remain a busy field well into late 40s. By 1951, it would be closed for good. Although the shopping mall would rise in its place, at least one source mentions that a former Roosevelt Field hangar became a nightclub in the 1960s called Murray the K’s World, operated by a popular deejay.

So I just listened to the podcast for LaGuardia and not to be picky, but everyting I have seen put JFK in Queens, not in Brooklyn. Also, the Lusitania was sunk by Germans, but not by Nazis.