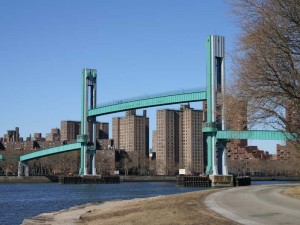 I’ve never quite understood the Ward’s Island Footbridge which sits at the mouth of the Harlem River like a half-finished child-sized model of an actual bridge. It’s intriguing, mystifying and quaint, rather like some rusting antique in a flea market.

This bridge, with its entrance at 103rd street, connects Manhattan to Ward’s Island. Why would you wish to go to Ward’s Island, you ask? Well, it’s attached to Randall Island via landfill and there’s lots to do there, if you’re inclined to sports. Ward’s also offers a wastewater treatment plant! (There’s actually a nice little park nearby, but it may still be closed for renovations. The island’s actually riddled with construction work, so it’s not exactly an advisable walk.)

There’s actually a bit to explore on the two islands. But my point is — the joy of the Ward’s Island Footbridge isn’t where it takes you to necessarily. Given the island’s rather dissheveled state at the moment, just go for the appreciation of standing on the oddest and most under appreciated bridge in New York.

This is the only permanent bridge that serves only pedestrians and bicycles, a throwback from 1951 that seems to have some poignancy in this day and age of reducing traffic. In modern lingo, it has a very low carbon footprint.

A slender bridge at only 12 foot wide and 857 feet long, its middle section lifts to allow passing ships by it. The footbridge’s concrete and metal gratings and puke green color are typical of the city’s unfriendly pedestrian overpass designs. However its a nice feeling to walk across a bridge without the roar and vibrations of traffic nearby.

It’s even a movie star, delivering a convincing performance in the Diana Ross musical The Wiz.

New York Daily Photo has a striking view of it here. Below is one from Flickr…. 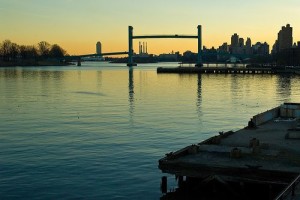 3 replies on “The oddest bridge in New York City”

Right now there is a whole lot of construction underway on Randall’s Island…I really wouldn’t go there on foot…Currently they are in the process of constructing astroturf soccer fields and also working on the Triborough Bridge…Icahn Stadium is up and running but getting there on foot from the footbridge is treacherous to say the least…Go by either car or bus to be safe as the other walkways are being worked on too…Personally, I wouldn’t venture there after dark either…

Drew, thank you for the tips! Tomorrow’s whole podcast is on Randall’s Island so I’ll put your advice in one of the main posts in case people are interested in checking it out.

[…] an ugly bridge.” The producers of The Wiz agreedâ€”it was partially covered in yellow vinyl for a yellow brick road cameo in Sidney Lumet’s 1978 musical starring Michael Jackson and Diana […]