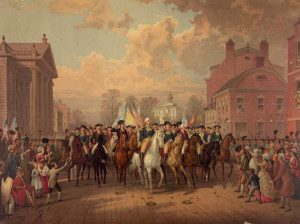 George dusts his shoulders off and re-enters New York

Today, November 25th, is the anniversary of the day when the British officially fled New York City after occupying the city for years during the Revolutionary War. For years after, New Yorkers celebrating this day by shimmying up a greased flagpole in Battery Park. I have always said that the city of New York should bring back this fantastic tradition.

ALSO: Celebrate by listening to our podcast on Life In British New York. It’ll be available next week for download on iTunes in our “New York History: Bowery Boys Archives” feed. Evacuation Day is also talked about in our Battery Park podcast, which is already available on the archives feed.

I picked up a book last week that made it clear for the first time how the Revolution got started in New York. It’s called “Defying Empire: Trading with the Enemy in Colonial New York” by Thomas M. Truxes. He’s going to speak at South Street Seaport on Wedneday, December 3rd and at Fraunces Tavern on the 9th.

I saw it too! I just finished the book over the weekend and was thinking about heading over to that book talk on Wednesday. I didn’t realize so much was going on in New York before the revolution and want to find out more.