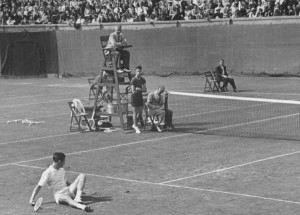 ABOVE: Tennis’ great star of the 1940s Bobby Riggs takes a spill at the American National Tennis Championships — later to be called the U.S. Open — at the West Side Tennis Club in Forest Hills, Queens. Believe it or not, the tournament was played at this Queens country club from 1915-1920 and 1925-1978. It was then tranferred to the Singer Bowl, the old Flushing Meadows music venue permanently transformed into Louis Armstrong Stadium, now part of the USTA Billie Jean King National Tennis Center. (Picture above courtesy LIFE images)

You can still relive the early years of tennis at this historic club — that is, if you’re a member. 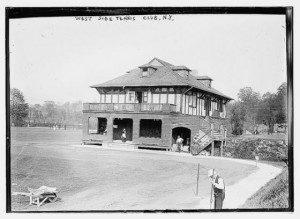