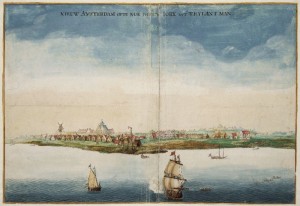 “By proclaimation of February 2, 1653, Director General Peter Stuyvesant informed the inhabitants of New Amsterdam that henceforth the Island of Manhattan would constitute the City of New Amsterdam and that the City would be ruled by two Burgo-masters* and five Schepens** appointed by him.”

— from The Story of New Amsterdam

* A burgomaster is a city magistrate and would have been Stuyvesant’s right-hand men
** A schepen is something akin to a city alderman or councilman
***And yes, he’s THAT Beeckman, name altered to Beekman of today’s Beekman Place fame