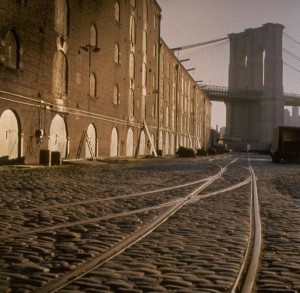 Mad Men starts on Sunday, speeding the story up to Thanksgiving 1964. What was going on in the city then? [City Room]

You think it’s hot down in the subway today? Imagine what it was like several decades ago — without air conditioning. [Ephemeral New York]

Last week they found a wooden ship last week while excavating on the site of the World Trade Center. But finding old ships while digging around downtown is nothing new; they found an even largest vessel — and intact — on January 1982 while digging around a construction site at 175 Water Street. (Incidentally, 175 Water Street is the home of troubled insurance firm AIG. Talk about a sunk ship!) [Institute of Nautical Archaeology]

1 reply on “History in the Making: The Long, Forgotten Trail Edition”

These are not really trolley tracks. These are the tracks of the now defunct Jay Street Connecting Railroad, which was built to serve the factories and warehouses in the neighborhood. The buildings shown in this photo, still extant along with the unused railroad tracks, were the Arbuckle Brothers coffee storage warehouses and was the railroad’s biggest customer.