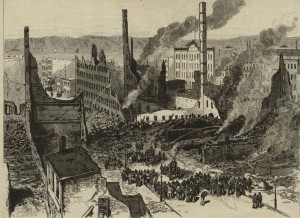 A gloomy sight indeed — the incineration of Hale’s Piano Factory, a competitor of Steinway, located at West 35th Street and 10th Avenue, destroyed by fire on September 3, 1877. One report calls Joseph Hale’s business a manufacturer of “notorious bogus pianos.” Several people were killed in this horrible blaze. Read the original piece from the New York Times archive.

The best of Bay Ridge: a thorough and lovely look at the other Third Avenue, the one in Brooklyn [Forgotten New York]

The Not-So-Long Island Railroad: The LIRR makes its first trip from Penn Station one hundred years ago yesterday, carrying the first of millions of commuters. [City Room]

Fran-tastic: An excerpt of an interview of one of my favorite New Yorkers of all time, Fran Leibowitz. “Then people starting opening clubs with an eye to being written about, so it was never a club you wanted to go to.” [Vanishing New York]

Tourism: Follow an Ohio family on their very first trip to New York City, circa 1950. ‘This Is New York’! [Flaming Pablum]