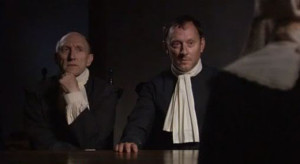 “Heretic, you are hereby banished from the island!”

I got into my love of New York City history by way of several years of interest in American religious history. So I was personally looking forward to the three-part American Experience series ‘God In America’ (on PBS), which got its start last night. I recommend it overall, although it relies heavily on reenactment techniques you may find distracting.

To be clear, this isn’t about religion in North America, but simply ‘God’, the Judeo-Christian God, by way of our country’s foundation. For instance, Native American religions are introduced and dispensed with in the first ten minutes, during a segment on the Spanish Catholics and their religious clash with the Pueblos.

The first part provides a clean explanation of how Christianity radically changed for the New World, how it was infused with independent spirit and mobilized for the demands of harsh, unexplored terrain. It covers the era of the Revolutionary War (and Thomas Jefferson’s contributions to the ‘freedom of religion’), the spread of Evangelical revivalism, and the early battles between the established Protestants and the Catholicism of newly arrived Irish immigrants.

New Yorker ‘Dagger’ John Hughes figures prominently in this episode, the fiery bishop who fought the city over its requirement of using one particular religious text, the Protestant-friendly King James Bible, in public schools. Hughes made a more visible contribution to New York City with the commission of the new St. Patrick’s Cathedral.

‘God In America’ leans quite heavily upon reenactments, as with the tales of another icon of New York history, Anne Hutchinson. She is no match in her battles with John Winthrop in the Connecticut colony, not so much because of her actual religious determination, but because Winthrop is played by two-time Emmy winner Michael Emerson, best known for the evil Benjamin Linus from ‘Lost’.

And Hutchinson’s story fades before they get to my favorite part — her settlement in New Netherlands in the area of Pelham Bay, Bronx.

Parts two and three unroll over the next two nights. There’s also a one-hour special ‘God In New York’ hosted by Jon Meacham that comes along for the ride, focusing on New York’s unique religious diversity. It features a small recap of the city’s religious history, with a special focus on the Flushing Remonstrance.