I’m a sucker for severe electric-laden art-deco theaters like the Trans-Lux Modern Theater, once located on the corner of 58th Street and Madison Avenue.

Most every midtown theater in the 1920s dabbled into electric signage to grab attention. But Trans-Lux worked in the opposite direction. To underscore the importance of illuminated billboards in New York, Trans-Lux was actually a sign company who then dabbled into theater ownership.

Their separate film branch, Trans-Lux Movies Corporation, was a collaboration with RKO Pictures. This screen at 58th and Madison, opening in March 1931 as the first of Trans-Lux’s theater ventures, was a unique venue that played newsreels and shorts.

It was an ‘upgraded’ film-going experience, in a miniature theatrical environment. According to a Time Magazine article from 1931, “[t]his theatre, about the size of a small drugstore, has 158 comfortable arm-seats, a turnstile in front and a svelte modernistic interior in which newsreels now flicker from 10 a. m. till midnight. There are no ushers; a ticket girl, two operators (union requirement) and a manager run the house.”

Customers would pay a quarter to see about an hour of newsreel and short films, in a brightened environment to allow them to read their programs and newspapers without squinting.

Trans-Lux opened several ‘newsreel’ theaters throughout the city, although by the late 1930s, those that survived the Great Depression switched to conventional feature films.

This Library of Congress image from April 1931 shows the building from the corner. That glorious neon lettering would have brightened a bustling Manhattan corner.

Trans-Lux is actually still in the film business today as a conventional theater chain Storyteller Theatres, located in a few western states.

Below: She’s waiting to take your ticket! (source) 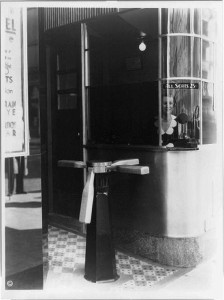 You didn’t mention the most famous reference to the Trans-Lux:

I recall my college film professor in early 80s telling me his family owned the Trans-Lux theater chain and that they were in the film business since the dawn of cinema. Sad to hear that the chain dwindled down to a few theaters, it was quite widespread across the country I recall.

Was your professor’s name Brandt by any chance? The Brandt family had its own theater chain that merged with Trans-Lux. The Brandt’s became the controlling shareholders.

Tran-Lux also co-produced and operated “The New York Experience” multimedia show from 1973-1989 in the basement of 1221 Avenue of the Americas, the McGraw-Hill Building. It was a major attraction for a time.