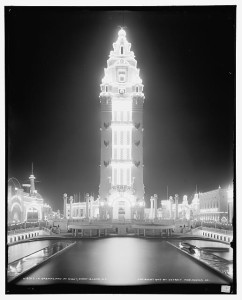 Tomorrow (May 27) will mark the 100th anniversary of a very unusual tragedy upon the landscape of Coney Island, a terrible blaze that consumed one of its most popular attractions — Dreamland amusement park. The swift and destructive fire, occuring just two months after another horrifying conflagration (at the Triangle Factory Fire), is considered by many to be the largest fire in New York history until the 2001 World Trade Center attack.

The nighttime fire started, appropriately enough, at an amusement called the Hell Gate (pictured below) and swiftly spread from one highly flammable structure to the next. By morning, the park was almost entirely destroyed, a charred ruin.

But never fear! Enterprising park owner charged admission for those wishing to view the blackened remains.

And the spirit of morbid curiosity survives! The Coney Island Museum debuts The Cosmorama of the Great Dreamland Fire, “a 360-degree immersive cyclorama” that promises to relive the drama. Visit their website for more information.

ALSO: Check out our two podcasts on the history of Coney Island, especially if you intend to head out there this summer: Coney Island: The Golden Age and Coney Island: 20th Century Sideshow. Download them for free from those links or from our iTunes page for Bowery Boys: NYC History Archive.

Below: The sinister Hell Gate, where the fire started, and the aftermath 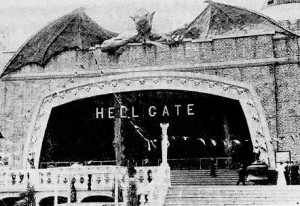 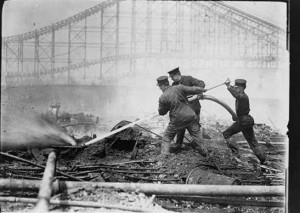 All pictures courtesy Library of Congress

1 reply on “Fantasy in flames: The end of Coney Island’s Dreamland”

Seeing the horrid satanic figure looking over the entry to Hell Gate, it almost seems that it was a self-fulfilling prophecy that it would turn into an oven and start the blaze that brought down the whole park.