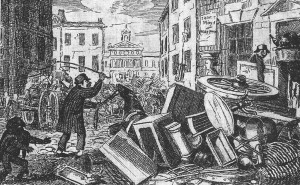 I’m moving into a new apartment starting tomorrow morning, and the whole process should take a few days. But on a brighter note, tomorrow will be my first day as a resident of Brooklyn! As a result the blog will be a little quiet until Friday afternoon, when I’ll have some notes on this week’s podcast, corrections and additions, and some recommendations of other books to read.

Historically, of course, May 1st has been considered Moving Day in New York City and was a sort of unofficial holiday, the day when leases uniformly began throughout the city. Thousands of people filled the streets with their possessions, causing what must have been the year’s most unusual traffic jams: horsecarts, pushcarts and wheelbarrows, loaded with furniture.

The tradition has been traced all the way back to the city’s Dutch days.

In 1832, the mother of Anthony Trollope wrote, “On the 1st of May the city of New York has the appearance of sending off a population flying from the plague, or of a town which had surrendered on condition of carrying away all their goods and chattels. Rich furniture and ragged furniture, carts, wagons, and drays, ropes, canvas, and straw, packers, porters, and draymen, white, yellow, and black, occupy the streets from east to west, from north to south, on this day.”

No less than frontiersman Davey Crocket was flummoxed by the strange event.: “Broadway, it seemed to me that the city was flying before some awful calamity….. It seemed a kind of frolic, as if they were changing houses just for fun. Every street was crowded with carts, drays, and people. So the world goes. It would take a good deal to get me out of my log-house; but here, I understand, many persons â€˜moveâ€™ every year.”

You can read more about this curious custom of early New York here. And I’ll be back to post in Friday if I haven’t lost my mind!