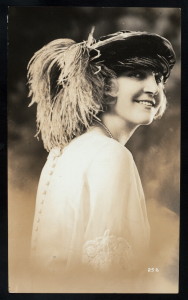 Ninety years ago today, the Miss America pageant debuted on the Atlantic City boardwalk. New York’s entrant was minor silent film actress Virginia Lee (at left). Although she didn’t win the ultimate sash, she was given some kind of runner’s-up ‘professional’ prize (the Endicott Trophy) on account of her celebrity.

In her later years, Lee claimed to have actually won the pageant, but had the honor stripped from her because a well-connected property owner on the Atlantic City boardwalk had promised the prize to his girl — and she got it.

Regardless, the attention garnered Lee magazine covers. And catty scorn. Following the contest, “Lillian Russell called me up to tell me I would never be the beauty my mother was.” [source] That would be the Lillian Russell, once the arm candy of ‘Diamond Jim Brady.

Lee made a slew of films in the silent era but could not make the transition into sound. One of her most successful films, the Fox production Luck and Pluck (1919), was filmed in Central Park. According to Turner Classic Movies, in that film, “[m]aster crook “Velvet” Joe Grim nervously passing time in Central Park before robbing the Wall Street subtreasury, chases a squirrel up a tree when it steals his bag of peanuts, and there sees Laura White (played by Lee) on a runaway horse.”

Virginia proudly proclaimed her lineage to Civil War general Robert E. Lee and claimed to keep a cabinet of his old uniforms with her. She lived to be 94 years old and died in Florida in 1996.