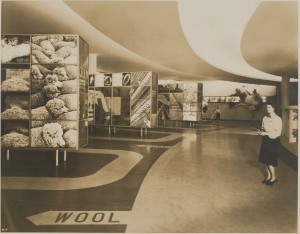 At the New York World’s Fair 1939-40: Australia makes a stylish, woolen debut, thanks to renown designer Douglas Annand. (Photo by Robert Coates, courtesy the Powerhouse Museum. You can check out other images of this curious pavilion here.)

We’re grateful to have listeners all around the world, and now those New York junkies listening in Australia will now be able to hear our show on a new program on Australian Broadcasting Corporation’s Radio National, Australia’s pubic radio.

Top of the Pods spotlights a selection of programs from around the world, and we’ll be joining the show monthly via some of the greatest-hits of our back catalog of podcasts.

We debut in Australia this Tuesday, Jan. 31, at 2 pm (or, if you’re listening in from New York: Jan. 30, Monday 10pm EST), when host Robbie Buck will present our show on Tin Pan Alley. We’ll be paired up with a program from London, The Hackney Podcast, exploring the historic neighborhood through its transition as a ‘host borough’ of the 2012 Olympic Games.

If you’re in Australia, you can listen in this Tuesday via one of these major frequencies, including 576AM in Sydney and 621AM in Melbourne.

You can listen online via one of these streams. The show will also be re-broadcast in Australia on Sunday, Feb 5 at 3 a.m. (Saturday, Feb. 4, at 11 a.m. in New York)

We’re currently scheduled to appear once a month. Thanks to ABC for helping us make our international debut. I will clearly need to make vacation plans to hear the show live from the beaches of Sydney sometime very soon!

And a little bit on the picture above: You can look here to read an article from the Sydney Morning Tribute about the debut of the Australian Pavilion at the 1939-40 World’s Fair, “not only the most interesting and informative exhibition that Australia has presented in any country, but one of the most attractive at the Fair.” In fact, according to Architecture Australia, “the pavilion was consigned to an interior within a building, which was shared with New Zealand…..From outside it appeared as if Britain occupied the entire complex, with Australia and New Zealand literally subjects beneath and to either side.”

4 replies on “The Bowery Boys — now on Australian radio!”

Congratulations! I love that you are getting more exposure. You both work so hard on both the podcast and the website. Thank you so much for making a non-New Yorker fall in love with your city!

Hi Tom & Greg, I found your podcast on itunes around a month or 2 ago and thought myself very unique & special for this corner of the world… now not so much! But I really enjoy your shows and once I work my way through the back catalogue I don’t know how I’ll cope having to actually wait for new releases. Wayne from the Hunter Valley NSW Australia.

G’day from Palm Beach in Sydney, heard your show on Robbie Bucks program – you have a new regular listener, many thanks for the work you put into your show.
Peter Mc

That’s the beginning of a worldwide mainstream diffusion of your excellent work!
Congratulations!
Mathieu (France)