Skip to the content
When I hear of riots in the Lower East Side during the late 19th century, my mind goes disgruntled newsies or agitated garment workers, rising up for fair wage and employment. Or maybe a vicious street gang like the Whyos primed to wreck havoc. I don’t immediately think of the orthodox Jewish community.
But it was indeed dissatisfied members of this group that staged a bit of chaos on the corner of Canal and Division streets during Yom Kippur in 1898.

According to theÂ New York Sun, the violence centered around a Russian Jewish coffee house owned by the Herrick brothers at 141 Division Street, a popular gathering place for ‘political spell-binders and labor agitators’ with likely a more casual atmosphere than the many Jewish restaurants surrounding it and certainly popular with young men.

Here’s an advertisement for Herrick’s in a chess journal from 1904:

Herrick’s was in the heart of Jewish social life in New York City. Â The Yiddish theater hangout Schreiber’s Saloon was around the corner at 33 Canal Street and other Jewish-operated cafes were steps away.

Even as sundown approached and traditional Jewish places closed their doors for the holiday, Herrick’s cafe stayed open, with tables occupied with young men in apparent disregard for the custom of fasting. The article makes a point to label most offenders as ‘American-born’ and ’16 to 18 years old’ — as in rebellious, with an implied lack of respect towards tradition.

The Herricks had actually planned this display of defiance, going so far as to advertise in an ‘anarchistic‘ newspaper that they would remain open for the holiday. They were prepared for some opposition, certainly, but certainly not for what came next.

Below: Under the Division Street elevated, 1910

According to the Sun, at sight of the violation, angry orthodoxÂ mobbed the place, throwing stones and smashing the cafe windows. Â The New York Times reports that ‘several thousand Hebrews’ soon arrived to protest in the surrounding streets. The police from the local Madison Street station were called to quell the violence and asked the proprietors to close their cafe for the evening.

Below: The headline from the New York Times on September 27, 1898 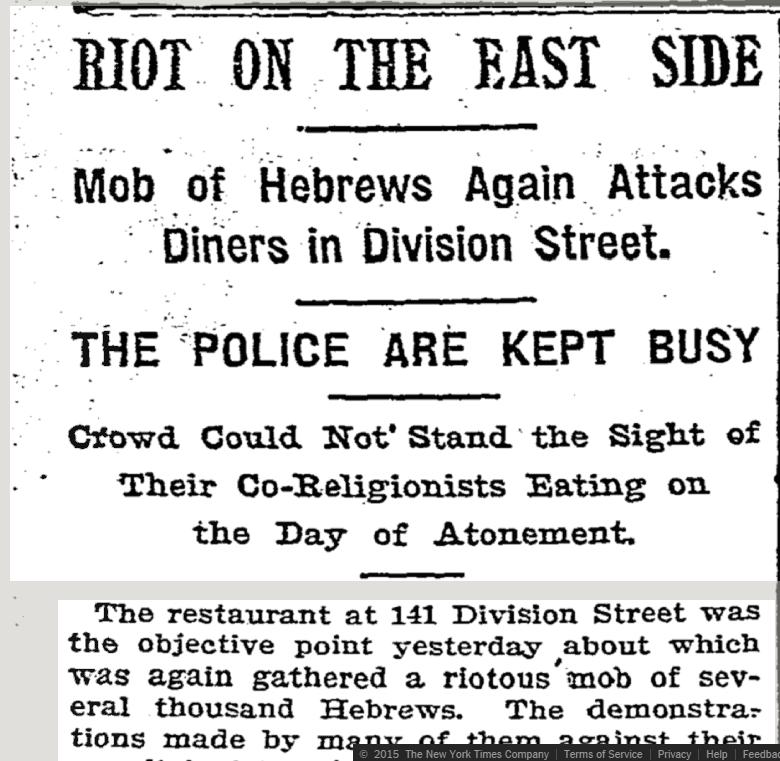 But violence further escalated the following day, when one of the brothers reopened the cafe the next morning ‘for customers, Jewish and Gentile, all day, at the usual prices’.

Hat stores on Division Street, below the elevated train and a bit west of the action in this article. Picture is from around 1907 (NYPL) 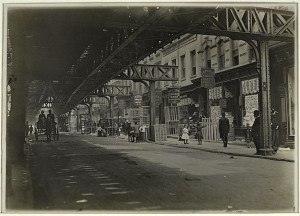 Fearing a repeat of the evening’s disruptions, police cordoned off the street to no avail. When diners left the cafe this time, they were met by “several thousands* [who] gathered and threatened dire vengeance on those who would eat on the holy day.”

Many offenders were chased down the street for fear of their lives. Eventually, the angry protesters even managed to storm the restaurant again where they “overturned tables, smashed dishes and threw crockery at the proprietors.” One diner was doused in hot tea. Another diner, with his three friends, happened to be military and ‘fired off a revolver to attract police’, scattered the crowd in fear. Police did arrive, with clubs drawn.

Soon the violence spilled into the streets and devolved, like so many riots of this type, into fisticuffs among angry young men. By the end of the day, several rioters were taken into custody, and the neighborhood quickly returned to its peaceful celebration of the holiday.

As for Herrick’s, well, the advertisement at the top is from 1904, so they obviously continued stirring up ‘political spell-binders’ and controversy in the neighborhood for many more years.

*Early news reports are never very good at estimating crowd numbers, so ‘several thousands’ could also mean ‘several hundreds’. Given how crowded this neighborhood was in the 1890s, most could have simply been trying to figure out what was going on!