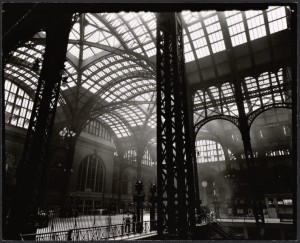 The interior of Penn Station, 1935, by Berenice Abbott (NYPL)

Enthusiasm is rising for the New Penn Station project, which would move Madison Square Garden from its present location and bring out the train station from the basement, a payback of sorts by the Municipal Art Society after the original Penn Station was torn down 50 years ago.

A major construction project for New York, and some of the proposals look gorgeous.  But if they tear down MSG, to modern eyes a true unpleasant structure, could there be a movement in 50 years to rebuilt that too?  [Municipal Art Society]

AIDS In New York: The First Five Years, the sobering new show at the New York Historical Society, looks at the most bewildering and frightening days of the AIDS epidemic. It’s a great overview, both measured and heartfelt, of a terrifying period in New York City history.  Three galleries take you from patients and doctors to politicians and a confused and enraged populace. Brief but very effective, especially the photography.  Some might flinch at the exhibit’s abrupt ending; the show leaves you dazed in the year 1985, just as scientists zero in on the cause, but nowhere near a solution.   [New York Historical Society]

Other stories on the blogs:

The best thing on the Internet this week: pictures from Staten Island in the 1980s by Christine Osinski. [Slate]

The Landmarks Preservation Commission is recognizing Gay Pride Month except, of course, for the fact that they’ve never landmarked a single LGBT site. [Off the Grid]

Earthquake insurance? There are at least three fault lines within New York’s city limits, including one under 125th Street: [Ephemeral New York]

RIP to the wonderful James Gandolfini.  I’m not sure what the status of this project is currently, but in 2011, Gandolfini was announced as an executive producer to Oliver Stone’s adaptation of Robert Caro’s The Power Broker, the barn-burning biographer about Robert Moses. Was he considering the role for himself? One can only imagine how great that would have been. [New York Observer]