The first American Labor Day began on September 5, 1882, with 10,000 workers from a wide variety of occupations circling Union Square, then parading up to the area of today’s Bryant Park. (A picnic ‘after party’ of sorts took place at a park at today’s Columbus Avenue and 92nd Street.) Â  Individual workers organizations had taken to the street before, sometimes violently. Â But this peaceful protest, this public solidarity, took the issues of New York laborers to the heart of the city in a way that could not be ignored.*

Illustration of the first Labor Day parade around Union Square, 1882 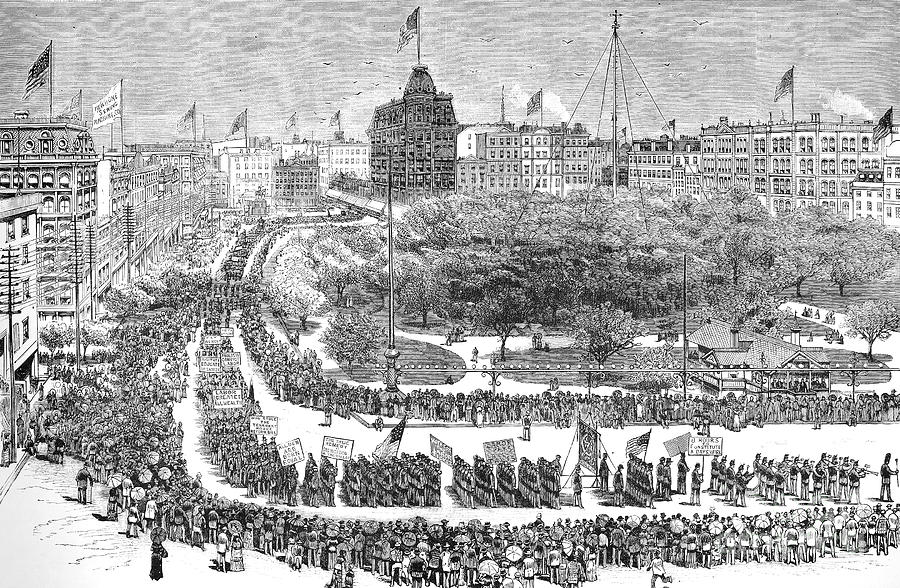 We take it for granted today. Â Labor Day is no more than a day off for most people today. Â But looking at the original press notices from newspapers of the day (from the following day, September 6, 1882) suggest an event certain New Yorkers recognized as monumental. Â Others considered it trivial, a nuisance or even a dangerous gathering of malicious intent.

Union Square would continue to be the location of Labor Day festivities for decades afterwards. Â The image below is of a parade from 1909 (courtesy LOC): 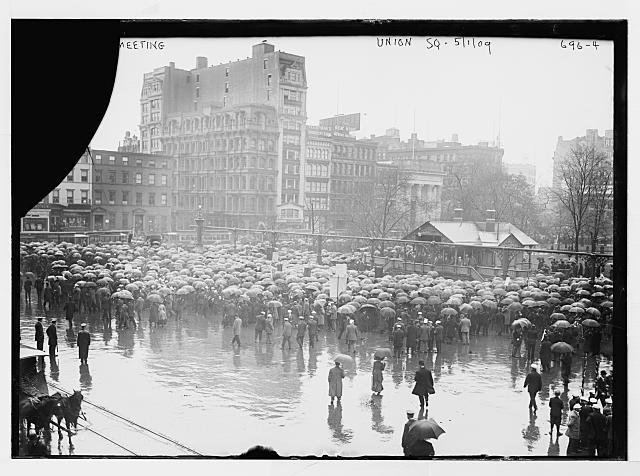 The New York Tribune begins nice enough. “The men who took part in the labor parade generally appeared to be persons of no small intelligence.” Â The paper’s vitriol was saved for the leaders of the movement, in this case organizers from the Central Labor Union, “demagogues of the worst kind.”

“It is a pity that workingmen allow themselves to be so cheapened.” Â The Tribune accuse the organizers of an ulterior motive — political chest-thumping. Â “But it is not at all unlikely that certain demagogues and dishonest leaders thought it a good time of year to show the two great political parties that there are ten thousand ballots in this city in the hands of men who … might be at the disposal of somebody — for a consideration.”

Indeed, there would be a statewide election exactly two months later, sweeping a host of Democrats into office, including Grover Cleveland into the governor’s office.

Even their reporting of the parade itself is tinged with a little condescension. Â “The parade of workingmen yesterday morning was not nearly as large as was expected by the leaders. Â This is probably due to the unwillingness of many workmen to lose a day’s work.” 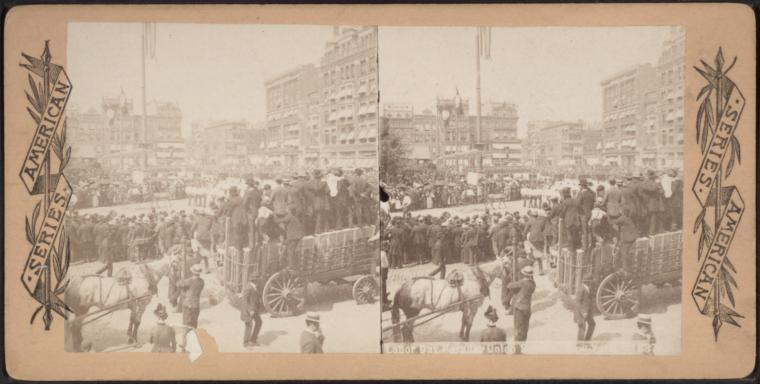 The New York Times seemed to find the parade slightly whimsical, almost superfluous. Â It echoed the disappointing turnout, but describes the event as calm, “conducted in an orderly and pleasant manner.”

The coverage focuses undue attention on the paraders’ fashionable attire. Â “The great majority smoked cigars.” Â However they stress that the good behavior is attributable to the fact that organizers banned alcohol. Â This detail is mentioned in no other coverage that I read.

Where the Tribune attested the lower-than-expected turnout to men not leaving their posts, the Times found a different reason — “due to the fact that [laborers] preferred to enjoy the day in quiet excursions in Coney Island, Glen Island and elsewhere.” 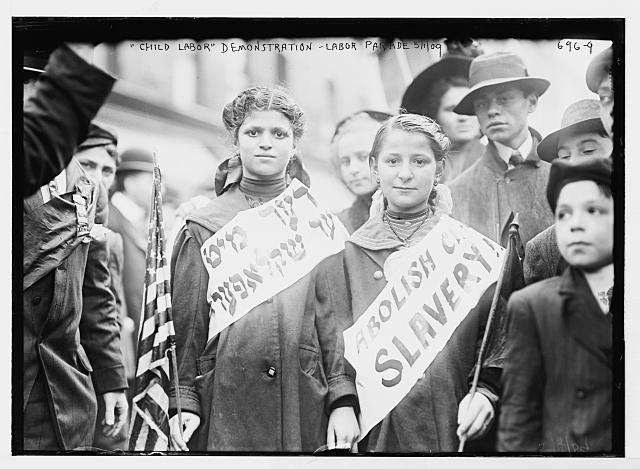 The enthusiasticÂ New York Sun describes it as a dry and brutal day. “[T]he rays of sun even in the early morning were very hot, and not a breath of wind brought relief from the oppressive heat.”

The same parade considered disappointing by the Tribune and the Times was conversely described by the Sun as a mob scene.

“As far ahead as one could see and as far down the side streets as forms and faces could be distinguished, the windows and roofs and even the lamp posts and awning frames were occupied by people anxious to get a good view of the first parade in New York of workingmen of all trades united in one organization.”

Far from a nuisance, the Sun recognized the parade as an important banner moment in history. Â Its description of events is truly painstaking.

*New Yorkers, it should be noted, got the idea from Canada. Â Read more about there here in my 2009 article.Â

Wow! Great post. It’s amazing to see what was reported in and on NY so long ago.