In 1863, New Yorkers flocked to the waterfront to see a startling sight — Russian war ships in New York Harbor.

The fleet of Russian ships, sailing into New York Harbor in September 1863, as depicted by Harper’s Weekly. 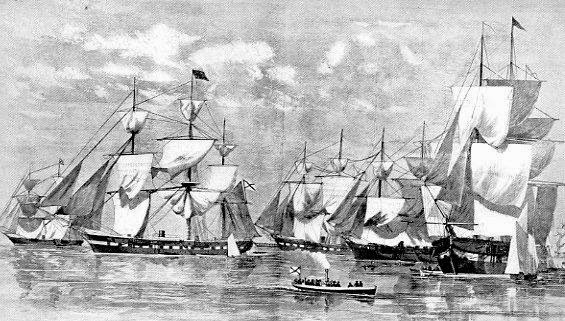 They were here as a display of force, but not to threaten the United States.

Russia’s Atlantic Squadron, as the fleet was known, was patrolling the Atlantic Ocean as a show of strength against England’s Royal Navy. They arrived in the harbor on September 24, 1863, initially anchoring in Flushing Bay, and stayed in the city for a couple months. (A description of the various Russian vessels can be found in this 1863 New York Times report.) 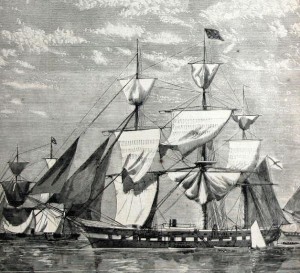 The fleet was led by the massive frigate Alexander Nevski (pictured below), an American-designed ship commissioned and built by the Russian government. A reporter for Harper’s Weekly, joining a reception onboard the vessel, praised its beauty.  “A lady with the most immaculate skirts and kid gloves can move any where, on deck or below, without danger of soiling either, so perfectly clean every thing about the ship is kept.”

America was in the midst of the Civil War, and New York itself was still recovering from the Draft Riots that July.  Many Americans believed the appearance by the Russians underscored a healthy support for the Union over the Confederacy, but most scholars today believe the Russians were acting with far more self-interest.

Still, most New Yorkers embittered by war welcomed the impressive show by friendly foreign powers, kicking off “a slight craze in the public mind.”  Harper’s Weekly remarked, ” [E]very citizen felt bound to do what in him lay to testify to the Russians our sense of gratitude for the friendly manner in which Russia has stood by us in our present struggle, while the Western Powers [England and France] have done not a little to work our ruin.”

New Yorkers marveled at the mighty mast of the Alexander Nevsky, “lying almost on a line westward from Trinity Church,” as it shot off its cannons and a band on-board attempted to play ‘Yankee Doodle Dandy.’ Â The ship officially docked on the west side at 23rd Street, and the procession, joined by city leaders, marched through the streets (pictured at left, courtesy NYPL), past Union Square and down Broadway.

“[T]he scene became splendidly animated.  The moving pageant rolled in a glittering stream down the broad thoroughfare between banks of upturned human faces, the trappings of the equipages, the gold and silver epaulets of the Muscovite guests and the sabres, helmets, and bayonets of the escort reflecting back in unnumbered dazzling lines the glory of the evening sun.”

In particular, New York women were captivated by the brawny Russian contingent in their handsome uniforms.  “Throngs of ladies in the windows most vigorously waved their ‘kerchiefs, to the great delight of the Russian officers, who never left off bowing, smiling, and even uttering their thanks aloud, while they doffed their gold-laced chapeau.”

(Not every woman was infatuated. The following day, two Russian officers reported being robbed by three women “at a disreputable house.“)

Below: A group of Russian soldiers, taken October 1863, courtesy Library of Congress 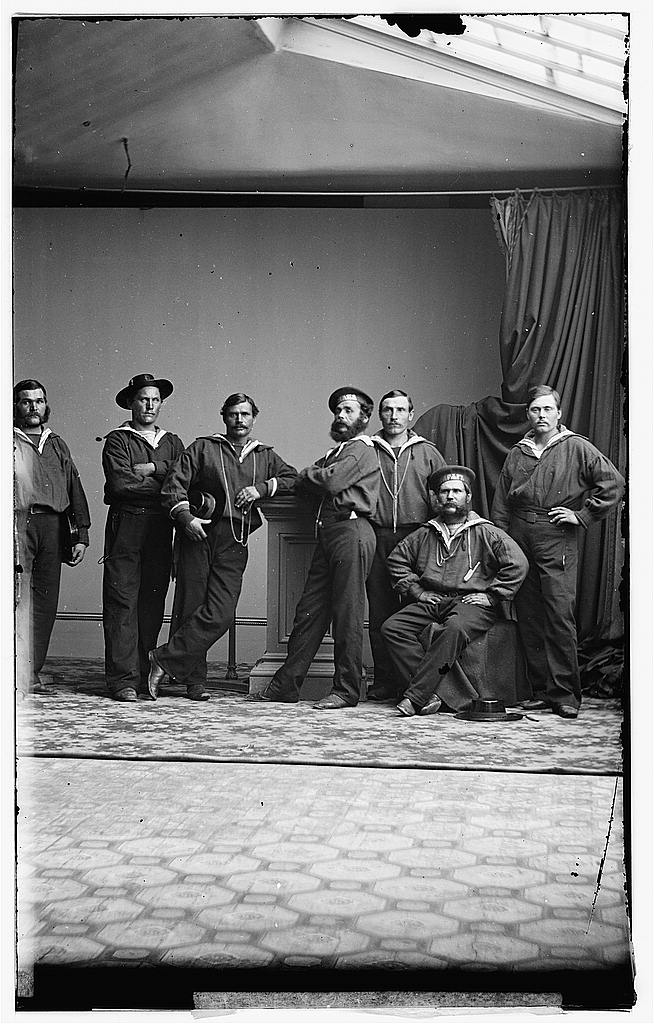 The finest hotels of New York were adorned with American and Russian flags. Tiffany’s, at its location on Broadway between Prince and Spring Streets, unfurled a gigantic Russian banner that stretched the length of the building.

Throughout the following weeks, the Russians were continually feted by the grateful Americans.  At a dinner with Mary Todd Lincoln and other American dignitaries, Mrs. Lincoln toasted the Russians for their kindness.  Russian dignitaries frequently met with Mayor George Opdyke and the Common Council and were wined and dined at virtually every hotel in town, including an opulent banquet at the Academy of Music in early November (depicted below in an illustration in Harper’s Weekly). 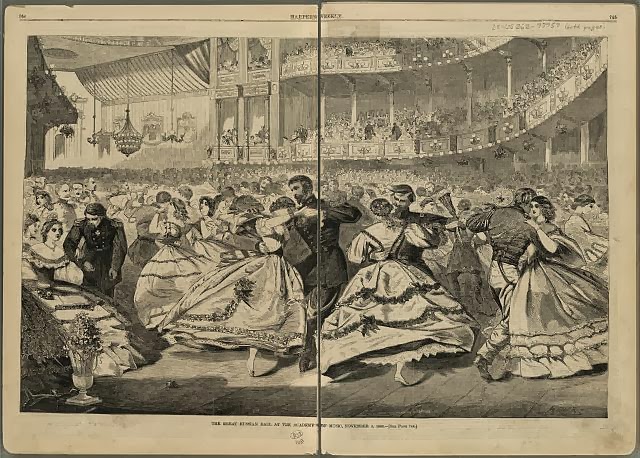 “They are dined, walked, driven, and are, with unconcealed gratification, availing themselves of the many opportunities of seeing us and all around and about us,” said the New York Times that October. “Yesterday, a number visited Central Park and enjoyed its fine drives and beautiful walks; others were whirled to High Bridge, and others were entertained with City sights of interest.”

The Russian ships would remain in American waters for almost seven months, darting up and down the coast, including a period of time in Washington D.C.

Amazing to think this happened then & what would happen if they landed now. Another great NY story. http://www.jennazark.com

This was fascinating, but I can’t but comment on the phrase “a show of strength against England’s Royal Navy.” Given that Scotland, England, and Wales had all been part of the same country for a century and half, and had been united with Ireland for over fifty years, it’s a little insulting to us non-English Brits to push us out of the picture.

It’s all about the past glory and friendship between the two great nations. It’s amazing how very few Americans are aware of this historical fact. And even in the article, the role of the Russian expedition to the American shores was distorted and down-graded, not to say anything of the article’s title.

Not a very often reminded chapter of the American history. I mean the “savage” Russians to guard the East coast of America against the “civilized” Brits? No, that cannot be:)