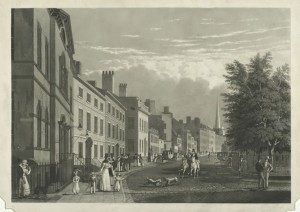 New York in 1834, looking up Broadway from Bowling Green (NYPL)

New Yorkers will go to the polls today to elect another mayor of New York City.  This ritual has occurred over seventy times (give or take) since the charter of New York was changed to allow for direct election of its mayors in 1834.

Today we will certainly hear about voting-machine errors, possible coercion and perhaps even a couple cries of vote tampering.  But the modern election process is relatively incorruptible, even tranquil, compared to the riots and ballot stuffing and outright vote forging of yore.  Nobody openly destroys ballots in the street anymore, and that’s a good thing. (Maybe it’s done more quietly today.)

Few elections in New York City were as chaotic as that very first mayoral election in 1834.

Previously, the mayor had been appointed by vote of the Common Council, an elected body equivalent today’s City Council.  They often chose prominent businessmen who were easily bought.

So, in 1834, New Yorkers were thrilled with the real possibility of a city leader not beholden to the whims of its Council, a membership whose intentions were often deployed straight from the meetings of political machines and did not reflect the will of the people. 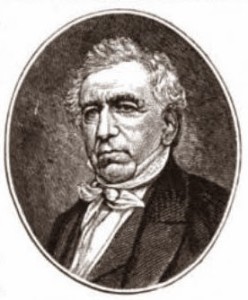 Unfortunately, direct election for the office failed to correct this sort of favoritism.  For instance, as I mentioned in the most recent installment of my Know Your Mayors series, tobacconist Andrew H. Mickle was elected mayor because his mother-in-law charmed many members of Common Council with a gift of $5,000 to Democratic machine Tammany Hall.

The man who would become New York’s first democratically elected mayor, Cornelius Van Wyck Lawrence (at right), was no less a convenient tool of political purchase.

Lawrence, a wealthy New York merchant, was a Democratic state congressman known for believing one thing, and voting another, especially if it benefited himself financially.  He was known to cry at the podium as he voted with his party.

From a biography on Martin Van Buren: “[Lawrence], the crying congressman, the weeping stock-jobber could have resigned had he disliked the party drill — but it brought him plunder, and he blubbered and held on, and afterwards he lent his name as a candidate for the mayoralty to uphold the gamblers he voted with in public…”

A proud New York tradition debuted with that first election — rioting.  The first electoral process lasted three days, as Democrats and Whigs attacked each other on the street in front of polling places.  On April 8, 1834, men fought with knives and clubs, destroying ballots and virtually shutting down the entire process.  One man was killed, twenty others wounded. 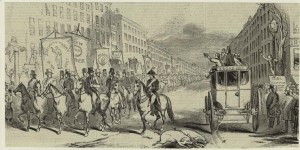 The Whigs were almost war-like in their determination to wrest power from Democrats, actually decorating a frigate with Whig banners, calling it the Constitution, and dragging it up Broadway in a violent and vitriolic parade.  Democrats were no better; the following day, acolytes headed down to Wall Street to destroy a pro-Whig newspaper office, its publisher armed and ready to shoot.

By April 10, the final day of voting, thousands filled the streets, ransacking gun shops and arsenals, preparing for all-out chaos.  “With Armageddon in the office, the mayor called out all troops — twelve hundred infantry and calvarymen — and order was restored,” according to Edwin G Burrows and Mike Wallace.  But even that resolution was one-sided;  most of the infantry was faithful to President Andrew Jackson — and by extension, Lawrence, the Democratic candidate.

With thousands gathered outside City Hall, the election results were announced — Lawrence had defeated the Whig candidate Guilian Verplanck by a mere 180 votes!

New Yorkers had at last exercised their direct right to vote for mayor.  And in the end — after days of riots and tumult, an election process singular in its chaos — New Yorkers voted in “the crying congressman.”