What storm is this? The horrific blizzard that hit New York on February 17, 1902.  It would be considered the worst snowstorm to hit the metropolitan area since the Great Blizzard of 1888. (Read all about it here.)  I assume we’re actually in the aftermath of the blizzard here, as the snow shovels are out, and the kids are playing.

What area is being filmed?  Madison Square Park (near 23rd Street), with the Worth Memorial in the background of some angles

Who made this?  Edison Manufacturing Company. Their Manhattan studio was nearby, at 41 East 21st Street.

Who’s the director? The head of Edison’s film division Edwin S. Porter, considered by most to be the first real movie director, inventing basic techniques used by subsequent filmmakers.

What are we seeing?  Trolleys, cabs, carriages and other unusual vehicles, braving the icy conditions and dodging pedestrians at the intersection of Broadway, Fifth Avenue and 23rd Street.  At one point, you almost see a team of horses slide off the road!

Below: An illustration from 1899, showing cabs parked along Madison Square (courtesy NYPL) 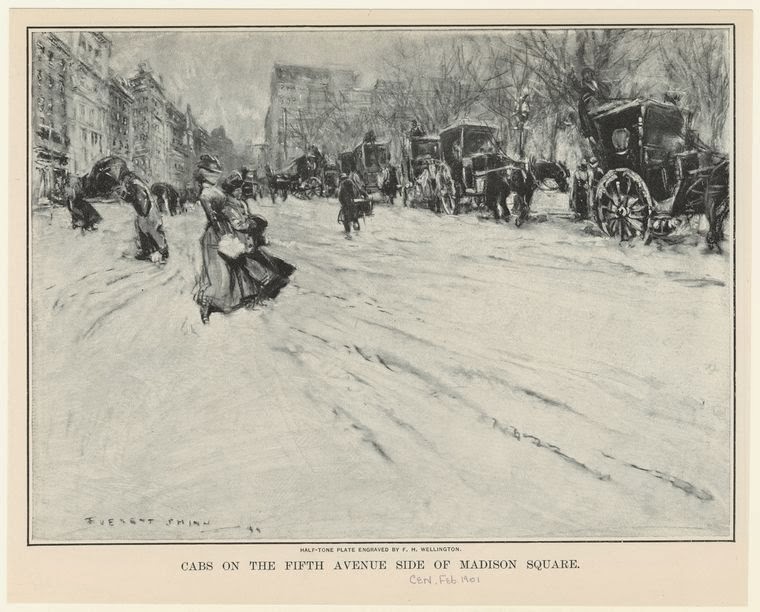 Why aren’t they showing the Flatiron Building?  It’s not completed yet!  The Daniel Burnham-designed office building would be opened by the summer, to great fanfare.  But as an open construction site, it would have been dangerous to linger anywhere around it.  I believe the slanted beams you see at the very end are part of the construction site.

It would have looked something like this (picture courtesy the New York Public Library): 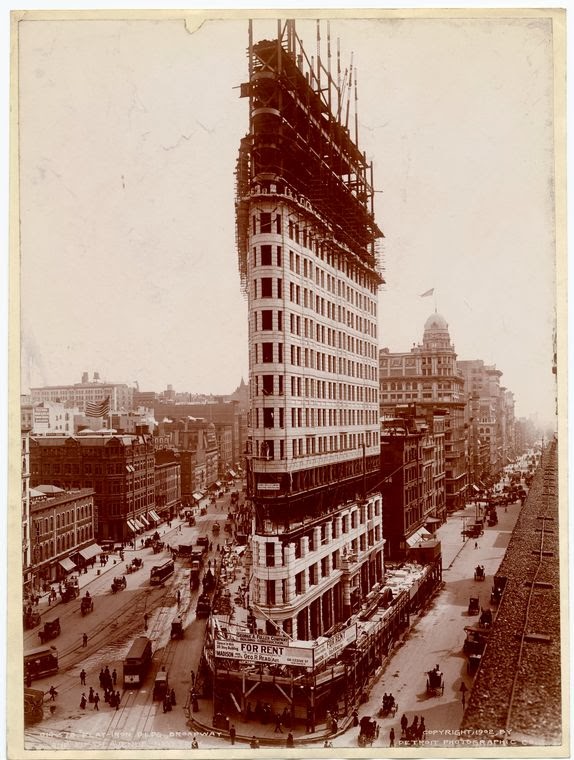 This is the first film of a New York blizzard?  This is probably the first film of any American blizzard. Primitive film technology had only recently allowed for outdoor filming.  Porter and his crew would have been brave indeed dragging Edison’s equipment even two blocks through these conditions.

What’s that statue at the 1:15 mark?  The seated, snow-covered figure of William Seward.  The statue has sat at that corner since 1876. (More about that here.)

What’s that big building at the end?  The Fifth Avenue Hotel, once considered the greatest accommodation in New York City and a headquarters for backroom politics in the 1870s and 1880s.  Its glory days are long passed by the time of the blizzard.  Six years later, it would be torn down and replaced with the building that stands at that corner today — the International Toy Center.

As the camera pans around, you can see the Fifth Avenue Hotel street clock, a replica of which still sits in that very spot.

Is this the first movie ever filmed in Madison Square?  No.  That distinction goes to a boxing match filmed seven years earlier at the top of Madison Square Garden between ‘Battling’ Charles Barnett and Young Griffo.

The camera is definitely following the man with the shovel.

What i learned is that, snow is actually a huge problem of the city, it’s probably because that there were not much snow storm during my times in NY that i don’t think it would be a problem, but it seem it is. I actually also learned, well, realized, that shoveling snow must be harder back then, since there’s were no truck to plow the street, it didn’t have much new technology. This connect to the time period of late 1800s and early 1900s. The source that were used in this article, is a video of primary footage, and primary picture. My question how did the public react to this storm.

What I find interesting about this is that this location the film was taken is blocks away from my school, Baruch College Campus High School on 2th street. Not sure if there was anything that I learned beside the fact that Edwin S. Porter was the head of Edison’s film division, but what I didn’t know was that even though the worst blizzard was over trolleys, cabs and carriages were still active as ever. The blizzard occured in 1902, so it would connect to the Gilded Age/Progressive Era. The main sources used included Primary videos/photos. A question i have is what effective methods were used to clear the snow from the streets, or what precautions were taken?

Musing what their reactions would be if they could know that 115 years later, they could be watched on glowing electric machines.

How yu can still see the horses breath with the cold air..poor things.. they deserved their rest in HEAVEN…and how people had to jump onto the trollies while it moves..