On this day in 1911, late in the afternoon, fire swept through the Triangle Shirtwaist Factory, located on the upper floors ofÂ a ten-story building near Washington Square Park. Due to odious practices by the factory’s supervisors, the doorways were blocked and the fire escapes were in poor shape.

When the fire was finally extinguished, 146 workers had been killed in the blaze. Many, fearing death by the flames,Â leaped to the street below to the horror of onlookers who had stumbled over from the park.

The Triangle Shirtwaist Factory Fire is one of the most horrible tragedies in American history, both an indictment onÂ New York sweatshop industries and the lack of any oversight about safety in high rise buildings. Â Many building regulations that keep us safe today were directly put in place due to these events.

From the New York Tribune the following day: 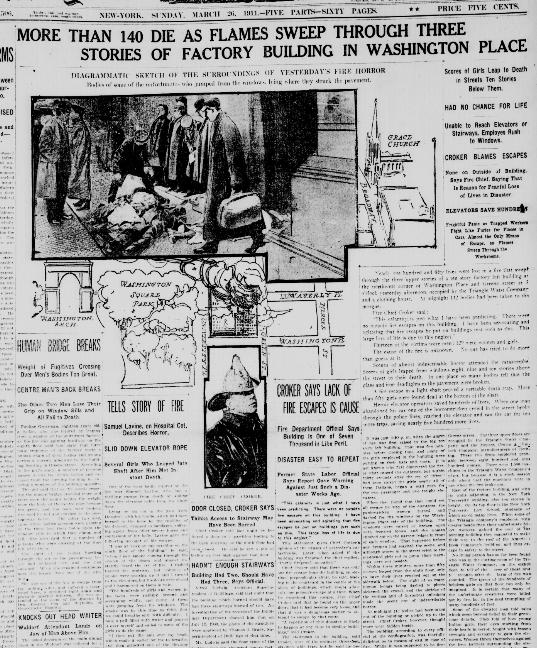 But on this anniversary I wanted to focus on theÂ people who died at the Triangle Factory that day. Can we imagine something about them by looking at where they lived?

Thanks to the research of Michael Hirsch and the Kheel Center at Cornell University [found here], it’s possible to actually come up with a map of the homes of all 146 victims of the Triangle fire. It would look something like the map below. Just zoom into it to look at the individual sites and take a lookÂ at which neighborhoods and boroughs that were most affected:

NOTE: The addresses are accurate, but a few of the points are approximately placed. In a few cases, the streets no longer exist, so I placed the points in close vicinity.

To nobody’s surprise, the neighborhood most devastated by the tragedy is the Lower East Side (The east side above Houston Street — i.e. today’s East Village — didn’t take that new designation until the late 1950s.) There doesn’t seem to be a block in the neighborhood with an empty home that day one hundred years ago.

A few years before the Triangle fire, the Lower East Side had experienced an even more ghastly tragedy — the explosion of the General Slocum paddle steamer on June 15, 1904. Among the 1,021 victims of that horrific event, most lived in this neighborhood and specifically in the German area of Kleindeutschland. As the victims were mostly women and children, the disaster effectively marked the end of the German enclave here. New York wouldn’t see such a large loss of life until September 11, 2001. [There’s a Bowery Boys podcast on this subject, recorded on its 110th anniversary.]

The deaths of the 146 garment workers on March 25, 1911, did not produce the same effect to the neighborhood, but certainly the loss was gravely felt in tenements and houses throughout the city. The map shows that the disaster’s immediate impact reverberated even into the other boroughs.

East vs. West
Of the 146, most all of them were born in three countries — Italy, Russia or Austria. A handful were born in the United States, presumably the children of first generation immigrants. So it’s no surprise most of them found homes in the Lower East Side, still the heart of immigrant life in the early 20th century. But I really didn’t expect it to be so decisive. Outside of a small cluster of people who lived in Greenwich Village close to the factory, there were no victims who listed addresses anywhere on Manhattan’s west side — not in Hell’s Kitchen, the Upper West Side, or anywhere else.

Yorkville and Beyond
I’m fascinated by those who lived further out, near the growing German neighborhoodÂ of Yorkville on the Upper East Side, for instance. A great many took streetcars and elevated trains into work from Brooklyn and the Bronx, and some might even have taken advantage of the new subway (although in 1911, its route was very limited). No surprise that none of them lived in Queens; the ethnic neighborhoods of that borough would really flourish after the 1920s.

And then there’s young Vincenza Billota, a 16 year old girl who lived out with her uncle in Hoboken, NJ — the only one of the victims to commute into the city. Her uncle came in from New Jersey that night to identify Vincenza who burned alive inside the factory. He identified her because her shoes had recently been repaired; he recognized the cobbler’s work.

From 1909, the caption reads “Tenement dwellers dropping clothes from fire escape for Italians on East side.”

There’s something moving about finding and identifying the homes of the victims. Most of these people had no solid roots, no property they owned. Only an address, a home they most likely shared with family members and other tenants. Every year on the anniversary of the fire, the sidewalks outside these addresses are marked with chalk, the names and ages written on the ground as a yearly reminder. You can look at a photo array from the 2011Â chalk excursions here.

They didn’t live in fabulous Beaux-Arts mansions or apartment buildings. Their homes were tenements, most overcrowded and poorly maintained. Thus, many of the actual buildings themselves are gone. In the cases of the victim’s homes on Monroe Street, even most of the street itself is gone, replaced with more modern housing projects.

At left, 135 Cherry Street, the home of fire victim Rose Cirrito. The photo is from 1939 (courtesy NYPL); the entire row of buildings was later demolished. 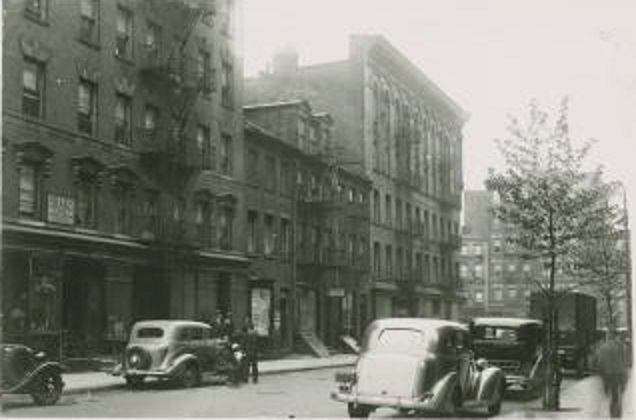 509 East 13th Street was the home to two Italian girls, Antonietta Pasqualicchio and Annie L’Abate, and an older Italian woman Annina Ardito, who all lost their lives that day. But that building has been replaced with a modern apartment.

Family and Friends
To grasp a disaster of this magnitude — at a vantage over one century later — you have to deal with it in generalities. The victims were mostly girls, mostly immigrants, mostly uneducated. However, by singling out a particular address, the individual tragedies come into focus. And oddly, you get to place that person’s life next to what inhabits that address today. In the case of the Lower East Side, some of these places are now restaurants, bars and luxury condos.

143 Essex Street was the home of two victims — two teenage brothers Max and Sam Lehrer from Austria. Both had arrived in the United States via Ellis Island in 1909; another Austrian, Sigmund Freud, also arrived at Ellis Island that year.

Young Jennie Stellino had lived in New York since she was 12 years old; she died in the blaze at age 16. She walked to the factory every day from her home at 315 Bowery, one of the few with a fairly easy commute. Jennie survived the blaze but died from her burns three days later. Decades later, the building at that address became internationally renown for the tenant at its ground floor, CBGB’s.

I’m not sure there’s even a 35 Second Avenue anymore. The street is inhabited by a diner and a few bars today; the Anthology Film Archives sits across the street. But it was the home to three women who lost their lives that day — Catherine Maltese and her two daughters.

For more information on on the Triangle Factory Fire, Â you can listen to the Bowery Boys show from Â April 2008 (Episode #42) that gives a dramatic overview of the event. You can check it out by downloading it straight from this link or getting it on iTunes from our back catalog feed Bowery Boys: New York City History Archive.
Or you can play it here:
Â —–
There’s a memorial today at the corner of Washington Place and Greene Street, with flowers on the sidewalk for every person who perished in the fire. 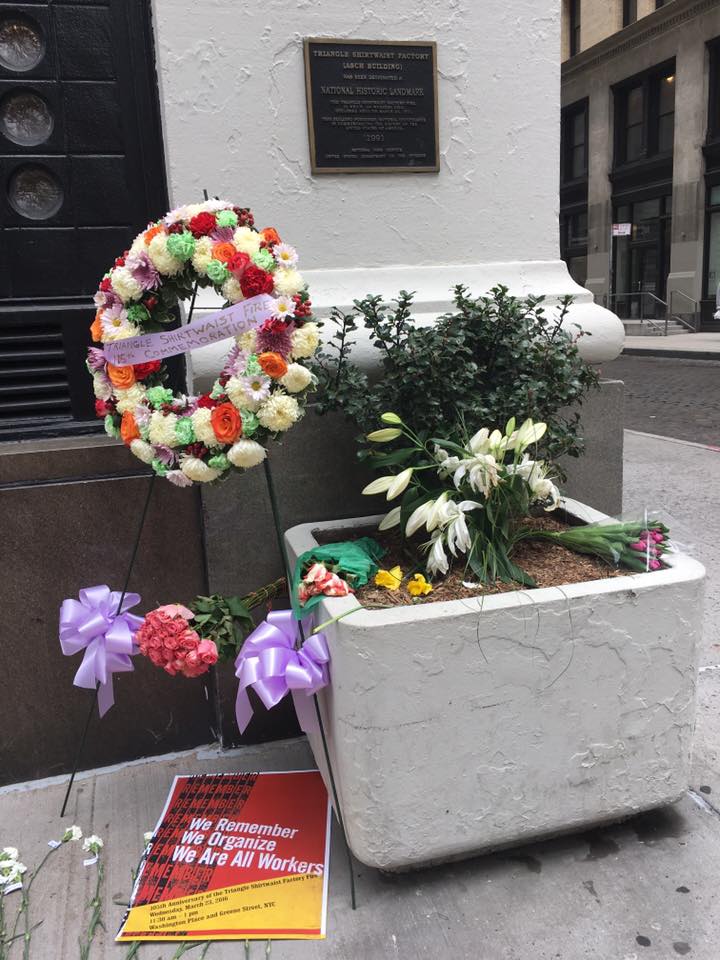 The display has an eerie parallel to one of the more disturbing images from the fire. 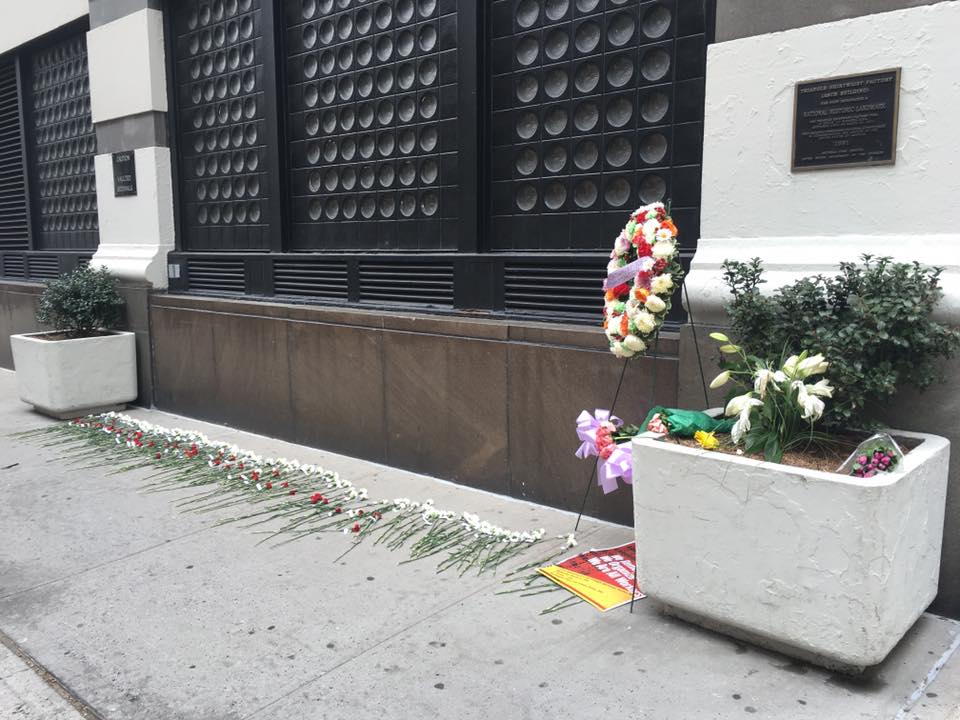 This is an expanded version of an article which ran on this blog on the 100th anniversary of this Triangle Factory Fire.
Picture at top: The Lower East Side in 1913, from the rooftop of the Consolidated Gas Building (4 Irving Place), cleaned up version of public domain image courtesy Shorpy

2 replies on “Where They Lived: Remembering the victims of The Triangle Factory Fire”

Excellent. Minor correction, 1530 Webster Avenue (Sarah Cooper, 16 years old, born in Russia) is in the Bronx, not Brooklyn. The addresses on Webster Avenue in Brooklyn run only into the 300s, I lived there for 30 years.

For a historic map, download the KML file for the 1911 G.W. Bromley map, available free from New York Public Library’s Map Warper, and the KML file for the work done above, and open both files in Google Earth. Then you’ll be able to see the addresses laid over an almost contemporaneous real estate map, that describes the buildings, many now gone, that the poor victims lived in.