The Statue of LibertyÂ celebrates her 130thÂ birthday tomorrow. Technically, I suppose, it’s the anniversary of her dedication, a star-studded, pomp-ladenÂ ceremony that took place on Friday,Â October 28, 1886. But for many months previous, she was a fierceÂ presence in the harbor, as the copper monument was arduously stitched together from far flung pieces — including an arm which sat in Madison Square Park for many years — upon a contentious new pedestal by Richard Morris Hunt. 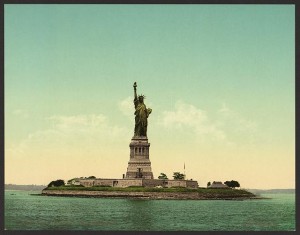 The dedication ceremony was not the sterling event of pure American patriotism thatÂ one might expect. The reality of her debut proved far more interesting:

1)Â The weather was totally awful that day. Nasty weather,Â rainy and wet, nearly wrecked the day, with the statue surrounded in mist and then a ‘regular London fog‘.

2)Â It was as much a celebration of the French as it was ofÂ the statue. Despite the rain, a contingent of 20,000 men in French uniform marched down Fifth Avenue in the morning, and the French tricolor was waved alongside the flag of the United States from virtually every window and balcony.

3)Â The early action took place in Madison Square Park. The official ceremony began near the Worth Monument next to Madison Square Park, withÂ President Grover Cleveland,Â the statue’s creator Frederic Bartholdi and otherÂ luminaries in a parade reviewingÂ stand, enjoying marching bands in the pouring rain. Apparently, Cleveland stood in the downpour for over two hours without an umbrella. (This is most peculiar behavior, considering what is popularly believed to have happened to President William Henry Harrison a few decades previous.)

4)Â No respect for veterans! A minor controversy erupted involving the participation of the three remaining living veterans of the War of 1812. They had been slated to join the parade, but somebody neglected to send a carriage for them. “The Memorial Committee of the Grand Army forgot us three times. We will never appear on a public occasion again,” proclaimed 90-year-old General Abram Daly.

Below: The official invitation to the inauguration ceremony. 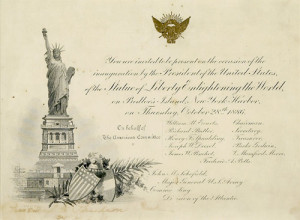 5)Â Lady Liberty was covered in a gigantic French flag. After the parade, all New Yorkers, en masse, rushed towards Battery Park, ostensibly to watch the dedication ceremony (but then, of course, it was too foggy to see anything). The dignitaries, meanwhile, maneuvered a boat through crowded watersÂ over to Bedloe’s Island. They were greeted byÂ a looming, shadowy figure draped in a gigantic, wet French flag. The effect, according to the newspapers, was one of mystery and eeriness. “[T]he nearest of the men-of-war could be seen floating like phantoms on what might either have been fog or water so far as the eye could see.” [source]

6)Â There’s only room for one Lady at this ceremony. Despite being a celebration of a large, gloriousÂ woman, there were less than a dozen actual womenÂ invited to the Bedloe’s Island ceremony, of the 2,500 or so that slowly made their way to their seats. (AÂ boat of bold suffragists did navigate close to the island.) Â In one way, it was for the best; it took hours for people to arrive at the island. The bandleader, the estimable Patrick Gilmore, played a bevy of marches and French folk songs until he and his musiciansÂ was soaking wet.

7)Â It was reallyÂ too loud to be having a ceremony at all. Explosions and whistles, the “impish screech” of steamships and tugboats,Â filled the harbor in celebration, and nobody on Bedloe’s Island could really signal to anybody to get them to stop. The dedication prayer and several speeches were drownedÂ out. Ferdinand de Lessups, developer of the Suez Canal and head of the French delegation, dryly remarked of the noisy steamships, “Steam, which has done so much good in the world, is just now doing us a good deal of injury.”

8)Â Unveiling fiasco! At the close of a very grand speech by New York senator William Evarts, a series of signals was to be sent to Bartholdi, holding a cord which would pull away the gigantic flag. There was a miscommunication however — in the middle of Evarts speech — and the cover was pulled off of Lady Liberty too early. This elicited a deafening,Â celebratoryÂ cry of horns, cannons and shouts from all around the harbor. Evarts, however, was still speaking. Nobody could hear him, and thus people at the ceremony actually began dispersing.Â Everts ended by turning to President Cleveland, who sat nearby, and uncomfortably finished his prepared remarks. Awkward!

9)Â No ‘Enlightening the World’ today. The weather was so bad that the Statue of Liberty’s torch could not be illuminated, so plans for an elaborate ‘pyrotechnic display’ were scrapped. 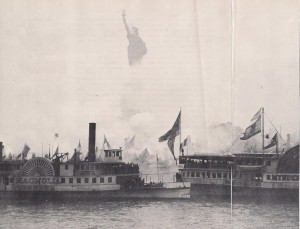 10)Â The disaster that almost was: There were so many boats in the water –Â with fog and mist still impeding visibility (as pictured above) –Â that it is actually quite incredible that President Cleveland and the French dignitaries made it off of Bedloe’s Island alive. In fact, the president had to transfer to a smaller boat which successfully got him to the Penn Railroad station on the New Jersey side.

11)Â Occupy Wall Street? The celebration didn’t stop there. Parades and marching bands marched well into the evening, with apparently little crowd control. At around Broadway and Wall Street and further south to Maiden Lane, streets were so clogged that there was literally no movement for over an hour. Overhead, people shouted from rooftops and even shot off pistols. Meanwhile, further north on Canal Street, somebody actually had the wise idea of placing a cannon on a rooftop and firing it in celebration. (No word on any suspected damage.) The city’s grand fireworks display did eventually take place, on November 1st.

For more information on the history of the Statue of Liberty, check out our podcast, recorded in October 2008! Download it here.

4 replies on “The Statue of Liberty turns 130 years old: Eleven facts about the near calamity that was her 1886 dedication”

A very happy birthday to the dear green lady – this landmark is wonderful to behold and I cherish the memory of my visit very much. An atmosphere of peace prevails around the place at all times and one can witness happy smiling faces thronging the place..

[…] of New York State) was to lead the parade and then watch from a reviewing standâ€”which he did, umbrella-less, with sheets of rain pouring down on him for two […]